Welcome to Uncanny Magazine Issue Forty-Five! All of the content will be available for purchase as an eBook (PDF, EPUB, MOBI) on March 1, 2022. The free online content will be released in two stages—half on March 1 and half on April 5.

About Our Cover Artist: Paul Lewin 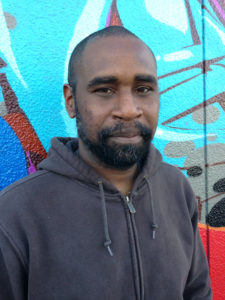 I was born in Kingston, Jamaica in 1973. I moved to the U.S. with my family in 1977 and spent most of my younger years growing up in Miami FL. In 2004 I moved to Oakland, CA. Art has been a part of my life from as far back as I can remember. My father was my first artistic influence. From a very young age I would assist him in various creative projects. My father was a great storyteller. I loved listening to his stories of the old country in Jamaica while we worked. He also taught me a lot about ancient societies, science, and history. My childhood home was filled with paintings, sculptures, and artifacts of many different cultures from around the world. These works, along with my love of sci-fi and fantasy art, inspired a lot of my early creativity. Eventually I began creating my own stories. Pencil and paper were my medium of choice in those days. I was also into graffiti during my early years but I wasn’t very good at it. It did teach me about having flow and movement in my work. That would lead me into my next phase in 1994 when I picked up a paint brush for the first time and began painting.

Today my art is inspired by Afro Caribbean/ African folklore, nature and sci-fi. I’m primarily focused on storytelling; a tradition that has been passed down from generation to generation, dating back to ancient Africa. My intent is to create alternate worlds, with various elements of African and Afro Caribbean culture. The subjects in my work represent the ancestors. Ancient ancestors, futuristic ancestors, interdimensional ancestors, and all the other beings that inhabit the spirit world. My creative process involves meditating on these concepts and allowing space for whatever comes up. I’ve always loved the theory of the artist as a conduit, transcribing visions onto a canvas. Or photographing dreams. I try to let each piece evolve on its own and not interfere too much. I’m not always sure of the meaning behind each painting, but I’m also not too concerned about that either. I’m more into the actual process of creating. I love getting lost in the details and watching an image come together from start to finish. One of my favorite memories as a kid was running home after school everyday to lock myself in my room for hours just drawing and creating. Not much has changed.

The Goldfish Man by Maureen McHugh

Under Green by Richard Butner

I Will Have This Diamond for a Heart by Carlos Hernandez

Requiem for a Dollface by Margaret Dunlap

The Path of Water by Emma Törzs

Jingwei Tries to Fill Up the Sea by Mary Soon Lee

A Wreckful Planting of Small Pockets of Thirst by Nnadi Samuel

The Uncanny Valley by Liz Argall

Ask a Unicorn by The Uncanny Unicorn

Resisting the Monolith: Collecting As Counter Narrative by Rebecca Romney

An Invitation to the Weary by Sarah Gailey

Wax Sealed With a Kiss by Elsa Sjunneson