Requiem for a Dollface

The doll was dead. There was nothing for it. Bear had seen bad cases before: legs ripped off, heads torn from necks, hair rudely shorn. Dolls mutilated by ink, fire, even—once—the lawn mower. Not every child loved their toys gently. That was life.

He wondered if the little girl knew yet. It would be kinder for a human to tell her, rather than for her to stumble on the body in the middle of her bedroom rug. Dolly had been on the shelf recently, it was true, but nothing resurrected old fondness like new loss. Bear’s kind was built for comfort, and he hated to see the little girl in pain. He would have told her himself, but facts belonged to the human mind, and Bear could only speak to the human heart. Even that, only in the dead of night, when the little girl was sleeping and the whispers of an old friend could slip into her dreams.

Dolly’s remains lay in a pile of crumpled papers, bits of string, and illicit candy wrappers: the secrets of the bedroom wastebasket laid bare because a human left the door open, and New Puppy had gone exploring. In theory, the bedroom was a sanctuary for members of the household who could not defend themselves from claw and tooth. In practice, nowhere was safe from the canine menace.

Carefully, respectfully, Bear turned the body. He had been unjust to blame New Puppy. Dolly’s soft rubber head was sliced from hairline to chin, the victim of a cold blade, not moist toothy exuberance. That, she might have survived, but this…

Dolls lived so long as they had a face, or the memory of a face. If a human could look at the small dent where an eye had once been stitched, painted, or buttoned and see an old friend with their heart, the doll lived on.

No such hope for Dolly. The front of her head was now nothing more than a gaping maw, revealing only the inside of her scalp.

No accident or crime of passion, this had been deliberate. Surgical. Cold. The hope that remained to Bear was slim and cold indeed: that somewhere in the house, Dolly’s face was still intact.

He had to wait until nightfall to begin his investigation, and the wait was interminable, but at last the house darkened, New Puppy was secured in his crate, and the humans slept. When the only sounds in the bedroom were the ticking of the hall clock and the rise and fall of the little girl’s breathing, Bear slid off the mattress and went to work.

He approached Old Cat first. The arthritic tabby’s senses might have dimmed since kittenhood, but little happened in the house without her knowledge. Old Cat and Bear had not always seen eye to eye—Bear bore the scars of an early encounter in a line of hand-stitching across his left ear—but they had earned each other’s respect.

Bear found her making her slow rounds, sniffing at spots of Particular Significance, alert to signs of trouble that Bear did not understand, but had learned to trust.

She hissed as he approached. “Leave it alone, Bear.”

At least she didn’t pretend not to know what he was after. He shook his grizzled, fuzzy head. “You know I can’t do that.” Bears were honest, loyal, and steadfast. He would pursue justice until his last fluff was gone and his fur loved into memory.

He was made that way.

“Did you see what happened?” he asked.

Old Cat wouldn’t, or couldn’t, meet his round, brown eyes. “The face is in the kitchen. She can tell you herself.”

Bear nodded his thanks. Old Cat sneezed and stalked away, her gait pained and halting.

Bear found the doll’s face under the baseboard radiator, her painted eyes striped by the slanting shadows cast by the range light across battered aluminum fins. Bear swiped for it with his paw, but his yarn claws only came back dusty.

“It’s no use,” the face said. “Old Cat couldn’t even reach back here.”

“I’m sorry, Dollface,” said Bear. Dolly was dead, but a little bit of name, even from another toy, might help a piece of her hang on long enough to tell him what he had to know. “Who did this to you?”

She sniffled a little. “It doesn’t matter.”

“Not to me. I’ll be gone by morning. Let it go Bear, just this once. Don’t go looking for answers you don’t want to find. Let my death die with me!” Her voice had always been high-pitched, but without the rest of her, it was thin and shrill, filled with the last emotion she would ever feel: fear.

Her wail didn’t carry far, swallowed by the hum of the refrigerator, the tick of the heater, the thousand tiny sounds of the kitchen at night. Bear kept his good ear cocked while he thought. Something didn’t add up.

Dollface was dying. What did she have to be afraid of?

But fear had two faces: fear of and fear for.

Someone could be afraid of anything: strangers, the bathtub drain, the dark. But no one—child, pet, or toy—feared for something they didn’t love.

Toy’s hearts were simple. They were made to do one thing: love a child and teach love in return.

Tiny plastic tears welled up in Dollface’s painted eyes as she watched him unravel the story she hadn’t meant to tell. “Don’t do it, Bear. She doesn’t understand.”

“Then we have to teach her, Dollface. It’s our job.” The face was weeping now, and Bear gentled his growl to a soft rumble. “You know I’m right, Dolly.” He used her name one last time, to remind her of what she had been, of what she had lost, of why what the little girl had done mattered. “We teach them how to love, and their love makes us real.”

Dollface screamed with the last shreds of her voice: “If her love made me real, it means she loved me. Loves me!”

Bear nodded. “She does.”

He wished it weren’t true. It wasn’t murder to slice a piece of plastic. He could have let that go. But the little girl had killed something real. She had to learn that carried consequences.

Dollface’s desperation turned mean: “You’re the one she doesn’t love! You don’t know how to love. If you loved her, you’d forgive her…”

Bear wished she would use her last words for something kinder, but life had missed the chance to teach Dolly kindness. Death would have to be kind enough.

Bear sat by the face until the end. Her voice went first, then the hint of sparkle in her eye. By the time Old Cat’s creaking steps passed on her third patrol of the night, there was nothing left under the radiator but plastic and paint.

Dollface’s final words echoed in Bear’s stitched ear as he made his way back to the bedroom. “If you loved her, you’d forgive her.”

Bear knew he loved the little girl. He also knew she loved him in return. If she didn’t—or hadn’t—he himself would be nothing but fur and fluff, and the little girl’s crime would be someone else’s responsibility. Fur and fluff had no burdens, felt no pain.

Forgiveness was surely the easier road to travel, but if Bear granted a dying doll’s last request, what then? The little girl had also loved Dolly, and now her dead face lay abandoned in the dust, waiting for the heater to melt it into the curling, cracked linoleum. Maybe Dolly’s life hadn’t taught the little girl all that it was meant to. Her death would have to finish the job.

Before the night was over, Bear was back in bed, snuggled in the little girl’s arms. As she slept, he whispered, speaking the language only her heart could understand. His words wove into her dreams…and trapped her, an intangible net that held the little girl asleep and spellbound until her pillow was wet with tears and she began to understand the tiniest fraction of Dolly’s love and the magnitude of her own betrayal.

The little girl clung to Bear and wept soundlessly until he was soaked to the fluff.

He stopped then. Let her return to peaceful, dreamless sleep. She would need to rest and regain her strength. Love wasn’t an easy thing to learn.

But Bear would teach her.

No matter how many nights it took.

(Editors’ Note: “Requiem for a Dollface” is read by Erika Ensign on the Uncanny Magazine Podcast, 45B.) 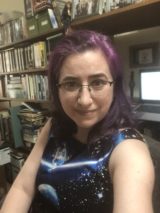