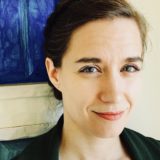 Rebecca Romney is a rare book dealer and writer. She is the co-founder of the rare book company Type Punch Matrix and co-founder of the Honey & Wax Prize, an annual book collecting award for a woman in the US aged 30 or younger. Romney has appeared on the History Channel’s show Pawn Stars as the rare books specialist since 2011. Her first book, Printer’s Error: Irreverent Stories from Book History, was published by HarperCollins in 2017; her second book, Jane Austen’s Bookshelf, about building a rare book collection of Austen’s favorite women authors, is forthcoming from Simon & Schuster. In 2019 she wrote the introduction for the Feminist Press’s reissue of Judas Rose, part of Suzette Haden Elgin’s feminist science fiction trilogy that anticipates Margaret Atwood’s The Handmaid’s Tale. In 2020 she edited Projections, an anthology of science fiction stories as early as 1836 that predicted some aspect of modern life, based in large part on texts she ran across in her work as a rare book dealer. Romney is a collector of feminist science ficiton, with a special emphasis on association copies. Learn more about her work as a rare books specialist at typepunchmatrix.com.