No matter the culture, the one defining trait that is agreed upon for the nefarious vampire is drinking blood. Vampires in modern literature are romanticized outcasts, beautiful and untouchable…as long as they fit Eurocentric ideals of beauty. More often than not, this means fair skin, noble Eurocentric features, colored eyes that aren’t brown, and a variety of hair colors that are not limited to just black. Exotic and daring enough to tickle the reader’s fantasies of creatures of the night, but not so far-out that it is deemed too foreign and repulsive. It is not too different from the concept of food, which, much like the concept of attractiveness in visual media, needs to be fit for consumption. Westerners, when feeling the need to “spice” up their plates, will seek something that they deem exotic enough, but not too exotic to be considered barbaric and monstrous to their palates. When a Westerner eats “exotic” food, they are deemed and revered as “daring, bold, and adventurous,” even if it’s from an establishment that has been whitewashed to fit their palates, such as the chains Panda Express and P.F. Chang’s (it is worth noting that Philip Chiang, one of the founders of the latter franchise, had his surname simplified to Chang for branding purposes, the easier to pronounce and remember for anglophones). A non-Westerner, on the other hand, is ridiculed as “barbaric, disgusting, and uncivilized” when they feast upon their native cuisine. Like food, in the realm of speculative fiction, particularly stories featuring vampires, there is nothing more exotic and yet commonplace than blood.

Case in point: Whenever I visit Taiwan, where my family immigrated from, one of my all-time favorite street snacks is 豬血糕, or zhū xiě gāo for pinyin readers. It literally translates to “pig’s blood cake” in English. Yes, it is literally pig’s blood boiled and mixed with rice, and rolled in peanut flour and topped with cilantro. Usually it is eaten off a stick like a popsicle or a corn dog. I absolutely love it as a savory snack. Since it is not readily available in its freshest form in the United States, where I was born and raised, I will buy as many of these as I can from street food vendors and eat my fill of it when I’m visiting Taiwan. But whenever I describe it to friends, or try to show them harmless mahogany cubes of congealed blood that innocently jiggle like jello upon plates at hotpot restaurants, they are repulsed and look at it as if it’s the stuff of nightmares.

Pig’s blood as food is not unique to Taiwan. It’s not even unique to Asian cuisine. There are variations of blood as food all across Europe: the United Kingdom has black pudding, Sweden has the blood soup svartsoppa, France has sanquette, Italy has the sweet sanguinaccio dolce, and Finland has blood pancakes. Yet, Taiwan’s and China’s blood cakes, Korea’s sundae blood sausages, India’s stir-fried lamb blood, Vietnam’s spicy blood noodle soup, and many other Asian dishes with blood as an ingredient are vilified.

I have seen this vilification and othering of food growing up as the Asian kid with the “weird” lunches. You would think rice, pork buns, and noodles would be considered normal alongside sandwiches and pasta, but my food was regarded as disgusting and strange. I have a distinct memory of being ten years old, sitting at a lunch table populated with white girls, eating my homemade rice rolls stuffed with pork floss and wrapped in nori seaweed. They gawked at my lunchbox, at the fluffy texture of brown pork floss, which resembles threads of cotton candy, only more salty and savory, and hued like milk chocolate rather than pink-dyed sugar. I offered a piece to one of my classmates, and she didn’t hide her disgust and shudder as she claimed, “Oh no, I’m…I’m full!” as she continued to gawk at my food in disgust. Growing up with kids who made fun of my food extends to the experience of being othered and vilified for our cuisine. This ties into seeing Asian characters in stories, where they are more often than not archetypes cut from stereotypical cloths, or serving as the background token Asian propping up a white protagonist’s story, even in the realm of speculative fiction and vampiric casts. A personal google search of “Asian vampires in fiction” fails to return results in any Western media. There’s plenty of famous vampire fiction in Japanese media, including Vampire Hunter D, Hellsing, and Blood: The Last Vampire, but none that is representative of voices and perspectives from a global diaspora. In more recent media, with the American Netflix adaptation of the Japanese video game Castlevania, the Japanese vampiress Cho had zero lines written for her character, and served as a voiceless prop despite being one of Dracula’s generals. My goal as a writer is to bring nuanced visibility and voice to characters of my background.

This experience informs me when writing speculative fiction. Food shows up often in my writing as a source of joy, comfort, and satiation for my characters when the world opposes and fights against them. Although vampires have fallen out of vogue with commercial fiction, growing up as the goth Asian girl you would call ugly in middle school, when I write of vampires, I see them through my Taiwanese-American immigrant lens of being othered, of growing up in a culture that does not accept you, that constantly others you and marks you as a perpetual foreigner, no matter how much you erase your identity and whitewash your palate to reject the food that comes from your ancestral country. Funnily, I’ve also been nicknamed “Vampire” all my life, from the kids in middle school who made fun of me for wanting to dress in black and stay out of the sun, to the manager I had at work who endearingly nicknamed me that because of my preference for a desk away from sunlight. I grew up fascinated by vampires, by their otherness, and by the fear that surrounded them. When reading Bram Stoker’s Dracula, the godfather of modern vampire lore, I see it written through the lens of xenophobia. Jonathan Harker certainly sets the tone for the novel by writing in his diary in the opening pages, “It seems to me that the further East you go the more unpunctual are the trains. What ought they to be in China?” Interactions with Dracula reveals his dedication to learning English, as his library in Transylvania “holds a vast number of English books, whole shelves full of them, and bound volumes of magazines and newspapers.” Even as he expresses interest in buying up property in London, he confesses his wish to blend in with Englishmen, knowing that no matter how well he speaks English, his accent, mannerisms, and appearance would give him away as “a stranger.” The novel is emblematic of invasion literature, as it continues with ill-written depictions of Eastern Europe, and culminates with the hunt and murder of Dracula. I daresay it draws plenty of parallels with growing up Asian in the Western world. American history has records of Chinese communities massacred, and Asians redlined from buying property. Even in the 21st century, the collective Asian experience shares common threads of being othered for your identity and culture, always grappling with the fact that society harbors this underlying fear of yellow peril and being a threat to Western powers. And for a bit of levity, “Asian don’t raisin,” so, like vampires, we don’t age. Even bats, a symbol of vampires and bloodthirsty terror in Western culture, are actually auspicious animals revered and loved in Chinese folklore and art.

When vampires drink blood, there is the fear element of their consumption of blood because they attack fellow humans. While my family, my fellow Asian community, and myself certainly don’t endorse cannibalism or consuming human blood, there’s always this fear surrounding Asian food and where the food is sourced from, how it’s prepared, and served with a smorgasbord of accusations that Asians will eat anything including dogs and bats, and use this wrongful accusation of eating habits to spark fear-mongering of Asians. Just look at the past couple of years of Anti-Asian hate in this historic era humanity is currently living through, with wet markets fueling Sinophobia related to the COVID-19 pandemic.

In my search for escapism, I eat for joy. I write for joy. Between eating blood, reading blood, and writing about blood as I gnash my enthusiastic fangs, I write to do my best to convey my experiences through a speculative lens. Food connects me to cultures, especially my own so that I can keep whitewashing at bay and celebrate the dishes that make me and my family unique. Food and dining with family and friends nurtures relationships, the cornerstone of living a fulfilling life. Not only does food fill bellies, it nourishes muscles, bridges connections, and nurtures souls. Writing takes my experiences, which also encompasses my love for food, and arranges the colored shards fragmented from different pieces of my life onto paper (or a word processor in our digital realm) to project connections. Writing mirrors these shards into the stories to mirror back the reflection of my vampiric energy, defying the Western lore that vampires have no reflection. As an Asian-American writer proud to list pig’s blood cake among my top list of all-time favorite foods, that’s one Western piece of folklore that I will happily kick off the cliff, for I choose to write speculative fiction that reflects back the world we live in, to consume and savor all the sour disappointments, salty sadness, bitter reflections, umami growth, and sweet joy. 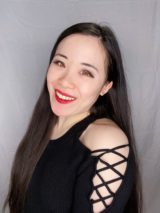 Jo Wu is an author born and raised in the San Francisco Bay Area, where she studied Biology and Creative Writing at UC Berkeley. She has been published in anthologies, and her short story, “Devoured by Envy,” was praised by Publishers Weekly as “the most Gothic of the successful stories” from the gothic romance anthology Darker Edge of Desire. Recently, she has been included in Insignia 2020: Best Asian Fantasy Stories and People of Color Destroy Lovecraft. When she is not writing, she will be sewing her next costume, deadlifting her next powerlifting goal, or auditioning for voiceover gigs.