Last year, Hugo Award-winning author Jim C. Hines introduced us to the Janitors of the Post-Apocalypse in his novel Terminal Alliance from DAW Books. A band of unlikely heroes saved the galaxy with Jim’s usual humor, humanity, and overflowing imagination.

Next year, Jim will be returning to the adventures of Marion “Mops” Adamopoulos and her team of hygiene and sanitation specialists in the sequel, Terminal Uprising! And great news, Space Unicorns! We are debuting today the fabulous cover by artist Dan Dos Santos, the novel’s synopsis, and the pre-ordering information so you can get this novel when it is released on February 12, 2019!

ALSO, THERE IS MORE, SPACE UNICORNS! Would you like a chance to receive a signed hardcover copy of Jim C. Hines’s Terminal Alliance, courtesy of Jim and DAW Books? Just leave a comment here (or Tweet with the hashtag #uncannyterminalalliance) with your idea for the worst job in SF/F! (Please no “Cleaning the holodeck” jokes. ) You have until 11:59 pm Central on Wednesday, May 30! One of you awesome people will be chosen at random for this delightful book! (Now closed! THANK YOU FOR YOUR GREAT JOBS!)

And now, THE COVER OF TERMINAL UPRISING! 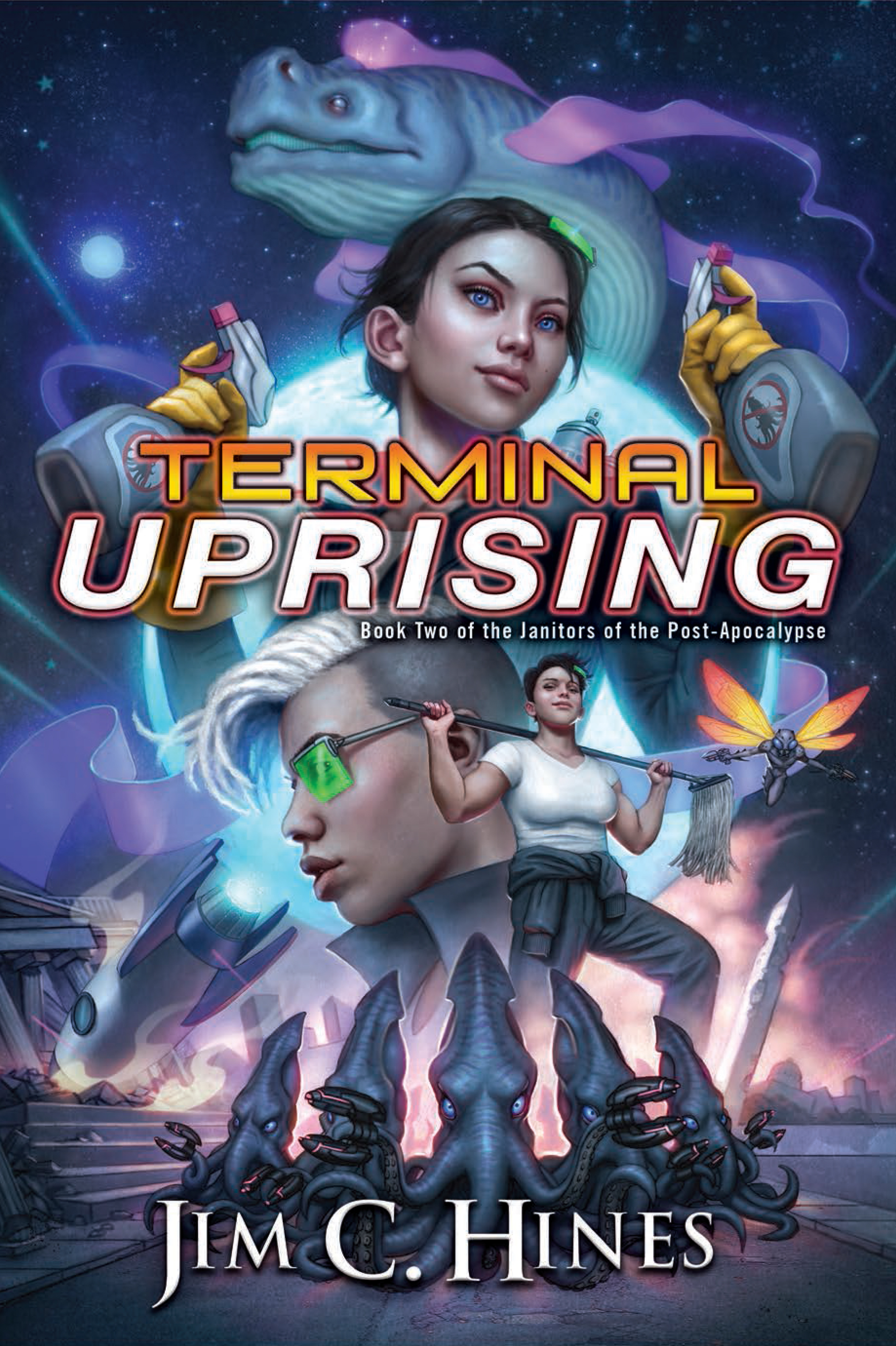 The Krakau came to Earth in the year 2104. By 2105, humanity had been reduced to shambling, feral monsters. In the Krakau’s defense, it was an accident, and a century later, they did come back and try to fix us. Sort of.

Between trying to protect their secrets and fighting the xenocidal Prodryans, who’ve been escalating their war against everyone who isn’t Prodryan, the Krakau have their tentacles full.

Mops’ mission changes when she learns of a secret Krakau laboratory on Earth. A small group under command of Fleet Admiral Belle-Bonne Sage is working to create a new weapon, one that could bring victory over the Prodryans … or drown the galaxy in chaos.

To discover the truth, Mops and her rogue cleaning crew will have to do the one thing she fears most: return to Earth, a world overrun by feral apes, wild dogs, savage humans, and worse. (After all, the planet hasn’t been cleaned in a century and a half!) What Mops finds in the filthy ruins of humanity could change everything, assuming she survives long enough to share it.

Perhaps humanity isn’t as dead as the galaxy thought.

“The book is damn hilarious. It’s less Tanya Huff and more Phule’s Company in the best possible way. It’s witty and sharp, it sneaks in some social commentary, and it skates just on the right side of the line between clever absurdity and complete chaos.” —Ilona Andrews, #1 New York Times bestselling author

“Jim Hines is one of the funniest, and most fun, writers in our genre! Terminal Alliance skewers science fiction tropes and takes on a wild romp through an original universe.” —Tobias S. Buckell, author of the Xenowealth series

“Terminal Alliance was a really fun read. Mops is a great POV character, and I enjoyed the way that the maintenance crew got to be the heroes—but also they didn’t just pick up the controls of the ship and fly around as though it were super easy.” —Ann Leckie, Nebula- and Hugo-winning author of Ancillary Justice

“I enjoyed Terminal Alliance very much. It’s a spunky, irreverent interstellar romp with most unlikely heroes and frequent laugh-out-loud moments. I look forward to more adventures featuring this delightful cast of galactic janitors.” —Marko Kloos, author of the Frontlines series

“Like the slightly demented love child of Douglas Adams and Elizabeth Moon, Terminal Alliance is clever, silly, full of surprises, and unfailingly entertaining. Apparently Jim C. Hines is capable of being funny in every genre.” —Deborah Blake, author of the Baba Yaga series

“Hines (Libriomancer) delivers a fantastic space opera that doesn’t skimp on the action and excitement but pairs it with a hefty dose of slightly scatological humor. The author is especially clever in having Mops and her team leverage cleaning tools and a knowledge of spaceship plumbing to fight their enemies.” —Library Journal (starred)

“[Terminal Alliance] is also good science fiction: a solid premise, an expansive universe, a compelling history, a strong and varied cast of characters, pulse-pounding action, and a galactic crisis with high stakes. The fact that it’s funny is icing on a rich and delicious cake. Clever, and should appeal to fans of Douglas Adams and John Scalzi.” —Booklist