(Award-winning author Sarah Pinsker’s first short story collection, Sooner or Later Everything Falls Into the Sea, was released from Small Beer Press on March 19th.  At the end of the post, there is a book giveaway you can participate in!)

In the title story of my new collection, Sooner or Later Everything Falls Into the Sea, a character answers questions from a fictionalized music documentary series, Inside the Music. For this blog post, I thought I’d talk about the music in a few of the collection’s stories.

This isn’t a music story as such, but I had a great time coming up with the songs that are Easter eggs within the narrative. If you write a few hundred close universes to your own, how can you not imagine the songs that don’t exist here but could have?

David Bowie and Sharon Jones were both still alive in this timeline when I wrote the story, so I had every reason to believe I could conjure up a reason for the two of them to collaborate on a new version of Bowie’s “Modern Love.” “Modern Love” itself was Bowie’s take on soul and Sharon Jones. Here’s her “Stranger to My Happiness” – now just imagine her singing lead on “Modern Love,” and Bowie coming in with the backing vocals. You can hear it, right? Me too.

I also know exactly how the John-Lennon-who-lived sounds on his 90s song “Change Your Tune.” World-weary, cynical, with a touch of humor. Maybe these tunes bled through the walls between universes, because they exist in my head.

The music in this story is all sea chanteys, which was a fun bit of research. I think the main named song is “Married to a Mermaid,” since I figured I’d use a story with a different bit of mythology made real. Here’s the Smithsonian Folkways recording.

Songs like that have a lot in common with prose fantasy, because they ask you to accept as given the premise. In this case, that a young man fell off his boat, past the sharks and whales, and down to a mermaid at the bottom of the sea, like ya do.

“Sooner or Later Everything Falls Into the Sea”

I think most of the named songs in this story are things Gabby is complaining about, like “My Heart Will Go On.” I tried to think of all the songs somebody would get sick of playing on an endless cruise, the way there’s a whole list of songs you know somebody will request if you’re playing covers in a bar night after night.

Gabby is a mix of a few real people. Gail Ann Dorsey is one of my favorite bassists. I’ve seen her with David Bowie, the Indigo Girls, Dar Williams, Ani DiFranco, and a host of others. She has an incredible voice and stage presence, and three solo albums of her own, but she’s most well known as a backing musician. Ditto the great Sara Lee, who has played with the Gang of Four, the B-52s, and numerous others as well as her solo stuff. Neither of them has Gabby’s personality, as far as I know.

“Our Lady of the Open Road”

I’m not going to tell you what the band in this story sounds like. Numerous people came up to me after the story came out and told me what the band sounds like, and every single person had a different sound in their head. I love that! I don’t want to interfere any more than I have to.

I did mention a few real bands as references in other places in the story. They walk into a bar where a holographic recording of Bruce Springsteen is playing “She’s the One,” and Luce plays it again later when she has a few minutes to herself. “She’s the One” is a song that can get stuck in my head for days and I don’t mind. There’s a Bo Diddley-pulse that runs through it, sitting behind the slow part and then busting out when the song goes from wanting to exuberant.

Luce plays a couple of other songs in that second scene as well. One was Frightwig, a great feminist punk band that played through the 80s and inspired a lot of the Riot Grrrl bands that came after. They got back together a few years ago, and I had the good fortune to see them when they came to Baltimore.

In the same line, she mentions the Kathleen Battle School, which I invented, and then disappear fear. Disappear fear is my friend SONiA’s band, in whatever form she wants it to take. They’ve been a full rock band, a solo act, a folk duo. The band is her, and she is the band, no matter what form they take. She’s been one of my inspirations as a musician, and I couldn’t resist throwing her into the story. Luce would definitely be a fan.

This story takes place during a middle generation of a generation ship’s journey. The narrator lives her entire life on the ship, but she was born into an old-time music family, and is charged with carrying on those traditions.

I was introduced to old-time music by my aunt. I’ve gone with her to a few of her old-time music gatherings, which usually involve a potluck dinner, a dozen fiddles, an upright bass, and an assortment of banjos and guitars. The fiddlers call the shots. I’ve described the experience in the story pretty much directly how it plays out.

I knew when I started writing the story that I wanted to invent a song, and to insert it between real songs to feel like it existed, and like it changed as it got handed down. The through-line of musicological/historical posts was the first thing I came up with. One of the neat things about the old-time players is that they study the provenance of the songs alongside the notes and fingerings. Here’s a YouTube video of “Midnight on the Water/Bonaparte’s Retreat.”

The first two minutes of the video are the performers setting up the background of the song, namechecking Aaron Copland and Alan Lomax, and talking about the special tuning they use, which is the tuning I chose for “Wind Will Rove.” The slower song gives way to a rave-up just after the five minute mark. “Bonaparte’s Retreat” is a great example of the kind of thing I wanted to invent. Songs called “Bonaparte’s Retreat” were being played on both sides of the Atlantic by the Civil War, though the origins were hazy. At various points, people added lyrics, and a bridge, then others stripped them out again.

I know what “Wind Will Rove” sounds like in my head. Maybe someday I’ll let you all hear.

SPACE UNICORNS! Would you like a chance to receive a copy of Sarah Pinsker’s collection Sooner or Later Everything Falls Into the Sea, courtesy of Sarah and Small Beer Press? Just leave a comment here (or Tweet with the hashtag #UncannyPinsker) with the name and artist of one favorite song of yours that you would love to see in an SF/F story! (Or no song if it is too hard to choose one!) You have until 11:59 pm Central on Wednesday, March 27! Five of you awesome people will be chosen at random for this phenomenal book!

ETA: This is for US residents only. If you answered before this ETA was posted, though, we will still take care of the international shipping if you are randomly chosen. 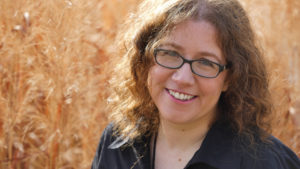 Sarah Pinsker’s short fiction has won the Nebula & Sturgeon Awards, and she’s been a finalist for the Hugo and numerous other awards. Small Beer Press will publish her first collection, Sooner or Later Everything Falls Into the Sea, in March 2019, and her first novel, A Song For A New Day, will be published by Berkley in September. She’s also a singer/songwriter with three albums on various indie labels and a fourth on the way. She lives with her wife and dog in Baltimore, Maryland.