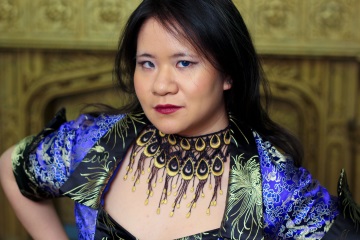 Diana M. Pho (also known as Ay-leen the Peacemaker) is a scholar, activist, performer, and general rabble-rouser. She is best-known for running Beyond Victoriana, an award-winning, US-based blog on multicultural steampunk, and the oldest-existing blog on this topic. For several years, she has traveled the country as a professional convention speaker about social justice issues and fandom. Her published work can be found in Steampunk Magazine: Issues 1 – 7, Fashion Talks: Undressing the Power of Style, Steaming into a Victorian Future, the Journal of Victorian Culture Online, Overland magazine, and The Anatomy of Steampunk. She also has work that will be featured in the forthcoming books Steampunk World, edited by Sarah Hans, Like Clockwork, edited by Professors Brian Croxall and Rachel Bowser, and The Steampunk User’s Manual by Jeff Vandermeer and Desirina Boskovich.

Diana currently lives and works in New York City as an editor for Tor Books & blogs for Tor.com. You can follow her academic work on Academia.edu.

1) You often write about steampunk “outside of a Western-dominant, Eurocentric framework.” What is it about steampunk that you find so appealing? What would a truly multicultural steampunk world look like?

What got me into steampunk was a fascination with 19th century history and literature combined with my love of SF/F, cosplay, and theater. What makes me continually return to steampunk is its possibilities for storytelling during a dynamic era full of conflict, struggle and hope, and how I believe it parallels our current times as we undergo the next technological revolution. As much as I adore 19th century aesthetics I’m fascinated by early modern industrialization and its sociopolitical implications. Hey, I dig that waistcoat and those spats, but let’s talk about changing gender roles, worker’s movements, the fight against slavery, and anti-imperialist campaigns too, shall we?

I also think that steampunk as an art movement gives the opportunity for people of color and other marginalized backgrounds to address their own histories in an empowering way: stories that had been lost, erased, or oppressed. When I think of “multicultural” I want to see stories told from all different perspectives in a way that creates a multifaceted conversation between different peoples and communities. A “truly” multicultural steampunk world addresses the complexities of industrial change, talks about it from the perspectives of the disadvantaged as well as the privileged, and the challenges that arise from these changes.

In order to achieve that, I’m all for critical mass of voices. A single author or a single book (or a single form of media) cannot best create a “multicultural steampunk world” (though it can certainly contribute toward one). I want to see artists and creators on all different levels build an immersive dialogue that translates into a multicultural world.

2) You’re also known as Ay-leen the Peacemaker. How did you choose this name?

The name started off as a joke and a play off of the very Western name “Irene” (which also means peace). And since steampunk has pulp, I wanted a western “gunshooter” aspect to it so put on “the Peacemaker” at the end (it is also the legit name of my prop gun). Years later, others have pointed out serendipitous factoids. The Colt .45 ‘The Gun that Won the West” is nicknamed the Peacemaker. The anti-imperialist General O.T. Shaw, the titular “Warlord of the Air” in Michael Moorcock’s classic forerunner to steampunk, also was known as the Peacemaker. Those connotations are purely coincidental, but I like to chalk it up to destiny. 😉

3) How do you use your work to challenge your readers?

In a nutshell: that learning can be fun! Or maybe, that all peoples have a history worth telling, and stories that should be more widely known, especially when we live in a society that tells us that our stories aren’t worth telling at all because of willful destruction, fear, shame, or ignorance.

I was really into ghosts as a kid (and still am, actually). One of my best friends in middle school lived in a haunted house. We’d have sleepovers where we’d try to detect the spirits and find cold spots. We did the Ouija board thing too and had some really creepy interactions.