As an author who shares a little-understood diagnosis with the protagonist of her novel, lately I’ve found myself writing and talking a great deal about Borderline Personality Disorder: in the novel itself, in an informal introduction to the disorder from a patient’s perspective at SF Signal, in self-disclosure on my own blog, and conversations both online and in person about all of these things. My urban fantasy novel Borderline was intended as a quirky, entertaining romp through Hollywood and fairyland, but the protagonist Millie and her inner landscape of BPD have proven as mysterious to many readers as the arcane components of the novel. (For the basics, I recommend this summary on the NIH’s web site http://www.nimh.nih.gov/health/topics/borderline-personality-disorder/index.shtml.)

When I begin a dialogue about BPD, the responses can at times be disheartening. Even once the first barrier of unawareness is passed, I immediately run into palpable waves of dismay and loathing. It would be difficult to find a mental illness that has a worse reputation than BPD among those who understand it. The hallmarks of the related dysphoria have spawned the reductive “Crazy Ex” stereotype: intensity, neediness, impulsivity, addiction, self-harm (particularly when faced with abandonment), fits of terrifying rage, and inability to hold long-term jobs, relationships, or even identities.

Why, then, would a writer choose to saddle her protagonist — the character for whom audience identification is most important — with a disorder that provokes such an antipathetic response in nearly everyone who understands it? The obvious answer would be, “To raise awareness,” but what good is awareness if it brings only revulsion? So there must be something else at work if the experiment is to succeed, and in the process of creating Millie I discovered something interesting. A Borderline (if you’ll forgive the reductive label for the sake of brevity) is uniquely qualified to excel in a fantasy narrative — especially a story wherein the existence of magic is a well-kept secret.

Millie spent the first twenty-six years of her life unaware of the existence of magic, and now has to accept (and operate within the rules of) of a magical parallel universe, all within the space of a week. A tall order, but perhaps the most powerful advantage a Borderline has in adjusting to an influx of fantastic knowledge is that for her, paradigm shifts — those moments when we realize that the rabbit we’ve been looking at is actually a duck — come more easily. Borderlines tend to question everything. Their world is never stable; everything is continually reinvented and recategorized, and drastic paradigm shifts are regularly accomplished with minimal supporting evidence. Sometimes this learned malleability is dangerous — it could make Borderlines vulnerable to cult leaders, pyramid schemes, and conspiracy theories — but at other times it can be extraordinarily useful. Borderlines are so accustomed to finding out everything they know is wrong that it may not take much effort to convince them of a shocking truth.

Another fantasy-relevant bug in Borderline cognition is the defense mechanism known as “splitting” – the tendency to sort people or ideas into extremes of black and white. In the real world this is catastrophic in relationships and discourse, but from Tolkien to Rowling, fantasy realms have long been welcoming habitats for ethical extremes. The intensity with which a typical Borderline yearns to cooperate with “good guys” and destroy “bad guys” serves her well in a universe where such categories cleanly manifest. The very same polarity of idealization and devaluation that makes a Borderline difficult to relate to in real life renders her heroic once she is placed into a context where swift identification and categorization of morality is important to survival. Those who vacillate when faced with True Evil rarely live to tell the tale. By nature, a realm with an extreme ethical binary can only be a fantastic one, but if the story you’re writing happens to be a fantasy, a Borderline can serve well as a protagonist even if her course of treatment has not yet managed to bring her “splitting” under control.

Perhaps the most infamous Borderline trait — and a common feature of “Crazy Ex” stories — is intensity of emotion. This intensity is seen as so excessive by neurotypical adults that it is usually dismissed as a performance, leading to the historical confusion of Borderline Personality Disorder with sociopathy (the name itself comes from the now-rejected theory that those with the disorder are not fully sociopaths, but just at the border). For the Borderline herself, the disorienting gulf between her emotions and others’ responses contributes in part to a staggering suicide rate: Borderline Personality Disorder is fatal to one in ten people diagnosed with it. Fantasy, however, is merciful to volatile people. Intensity is organic to magical worlds: curses cripple, enchantments enthrall, worlds hang in the balance. In many plotlines involving magic and monsters, cool detachment is not only unnecessary but perhaps even contraindicated.

So in fantasy, at least, a Borderline is in her element. And if we can imagine a context in which a stigmatized disorder does not destroy the life of the person who suffers from it, what questions does that raise? In the absence of magic, could we find a context in which a person with Borderline Personality Disorder could thrive: where mental flexibility can be crucial, and where the caustic fuel of emotional intensity can be burned to good purpose?

My own experience suggests that this is not so far-fetched. While there is no cure for Borderline Personality Disorder, those with the diagnosis are not doomed to miserable lives. With carefully practiced coping skills to blunt the most painful edges of the disorder’s symptoms, and with a context that makes use of an intense and agile mind, some of the more intractable quirks of Borderline cognition and motivation can be every bit as useful as they are frustrating.

A fantasy novel isn’t the only place where a Borderline can have a happy ending. For now, though, it’s possible that the idea of a fulfilling and dignified future for the Crazy Ex is too drastic a paradigm shift for many. Luckily, we have fantasy: a dress rehearsal for hope, a place where even the most comfortably settled minds can give themselves permission to train for the impossible. 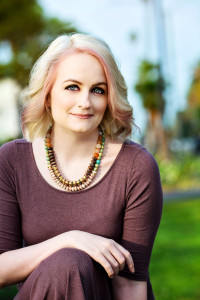 Mishell Baker is a 2009 graduate of the Clarion Science Fiction and Fantasy Writers’ Workshop, and her short stories have appeared in Daily Science Fiction, Beneath Ceaseless Skies, Redstone Science Fiction, and Electric Velocipede. She has a website at MishellBaker.com and frequently Tweets about writing, parenthood, mental health, and assorted geekery at @MishellBaker. When she’s not attending conventions or going on wild research adventures, she lives in Los Angeles with her husband and children. Borderline is her debut novel.