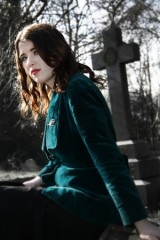 Sarah Rees Brennan was born and raised in Ireland by the sea, where her teachers valiantly tried to make her fluent in Irish (she wants you to know it’s not called Gaelic), but she chose to read books under her desk in class instead. She still uses Ireland as a homebase, though her friends and family rarely know where she actually is. Sarah recently completed her second series the Lynburn Legacy, a Gothic mystery series about a school reporter who discovers her imaginary friend is a real boy. Her next book, Tell the Wind and Fire, a retelling of A Tale of Two Cities with magic, is out April 6, 2016.