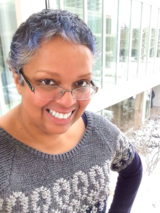 Mary Anne Mohanraj is author of Bodies in Motion (HarperCollins), The Stars Change (Circlet Press), and twelve other titles. Bodies in Motion was a finalist for the Asian American Book Awards, a USA Today Notable Book, and has been translated into six languages. The Stars Change is a science fiction novella, and finalist for the Lambda, Rainbow, and Bisexual Book Awards. Previous titles include Aqua Erotica, Wet, Kathryn in the City, The Classics Professor, The Best of Strange Horizons, Without a Map, The Poet’s Journey, and A Taste of Serendib (a Sri Lankan cookbook). Mohanraj founded the Hugo–nominated magazine, Strange Horizons, and was Guest of Honor at WisCon 2010. She serves as Executive Director of the Speculative Literature Foundation (speclit.org), has taught at the Clarion SF/F workshop, and is Clinical Associate Professor of English at the University of Illinois at Chicago. www.maryannemohanraj.com