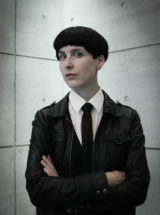 Karin Tidbeck is originally from Stockholm, Sweden. She lives and works in Malmö as a freelance writer, translator, and creative writing teacher, and writes fiction in Swedish and English. She debuted in 2010 with the Swedish short story collection Vem är Arvid Pekon?. Her English debut, the 2012 collection Jagannath, was awarded the Crawford Award 2013 and shortlisted for the World Fantasy Award. Her novel debut, Amatka, was published in June 2017 by Vintage. She devotes her spare time to forteana, subversive cross-stitching, and Nordic LARP.