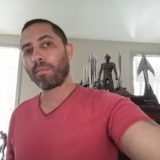 Arley Sorg is co-Editor-in-Chief at Fantasy Magazine and a 2021 World Fantasy Award Finalist. He is also senior editor at Locus Magazine, associate editor at both Lightspeed & Nightmare Magazines, and a columnist for The Magazine of Fantasy and Science Fiction. He takes on multiple roles, including slush reader, film & book reviewer, and more. He conducts interviews for multiple venues, including Clarkesworld Magazine and his own site: arleysorg.com. Arley grew up in England, Hawaii, and Colorado, and studied Asian Religions at Pitzer College. He lives in Oakland, CA but can sometimes be found on Twitter as @arleysorg. In non-pandemic times, Arley usually writes in local coffee shops. He is a 2014 Odyssey Writing Workshop graduate.