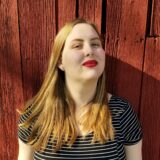 AnaMaria Curtis is from the part of Illinois that is very much not Chicago. She’s the winner of the LeVar Burton Reads Origins & Encounters Writing Contest and the 2019 Dell Magazines Award. In her free time, AnaMaria enjoys starting fights about 19th century British literature and getting distracted by dogs. You can get in touch or find more of her work at anamariacurtis.com or on Twitter at @AnaMCurtis.