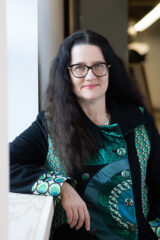 A.M. Dellamonica’s first novel, Indigo Springs, won the Sunburst Award for Canadian Literature of the Fantastic. Their fourth, A Daughter of No Nation, won the 2016 Prix Aurora for Best Novel. They have published over forty short stories in Tor.com, Asimovs SF, The Magazine of Fantasy and SF, and elsewhere, along with poetry, pop culture essays, and even the 2021 play Dressed as People, which they co-wrote with Kelly Robson and Amal El-Mohtar. Their newest novels, Gamechanger and Dealbreaker, were released under the name L.X. Beckett and are solarpunk adventures that imagine humanity surviving climate change and creating a post-carbon economy.