The Saga of Captain Jens

A pirate queen and buxom buccaneer is Captain Tina Jens
She plunders from the privileged and divies up the dividends
She keeps a lair on every coast Cicilia to Syria
Your maven for a haven far as Lemnos and Illyria
She sails on sloops so swift they oft mistake her for a peregrine
Her masthead is a mermaid coyly twined within her tailfin
But now she’s slipped so deep in folklore only song will ransom her
For never epic told of any pirate bolder, handsomer

She bandies wits and blades with Captain Nemo of the Nautilus
De–tentacles her ship from grip of Giant Squid and octopus
More merry than the Mariner, more deadly than Adventure’s crew
The lark of a Labat, the killer instinct of Liz Killigrew
As civil as young Johnny Read, and kinder far than Thomas Rose
Her hospitality outstrips the Hospitallers who conquered Rhodes
She’ll drink her whiskey straight then chase it down with ten Rumfustians
And pillage like Odysseus would do in the Homeric Hymns

One day she killed a cardinal so corrupt you couldn’t measure it
And turned to face three bishops, five fat deacons, and a Jesuit
The last of these cried, “Hold, you fiend–like spawn of darkest Tartarus!
Our strength will only grow and grow the more you villains martyr us!”
Our Captain Jens puffed out a breath, bethought her an alternative
“A priest is bad, a saint is worse, so maybe I should let ‘em live…”
And thus she tore their cassocks and condemned them to a term at sea
Then took each to her hammock and seduced the lot to piracy

So if you wish to give up days of briefcases and bumbershoots
And live a life instead of pistols, privateers, and prostitutes
And think you’ll end up Midas–rich, the envy of your foes and friends
Belay that yarn, ye scallywags, and sign on under Captain Jens!
She may not sail a frigate all of silver and of pixie dust
But save you from the gibbet—that she’ll do with one sharp rapier thrust
Her legend leaping larger, crashing higher than a tidal bore
We’ll shout above the splendid storm, “All hail our Captain evermore!”

With thanks to the Wordsworth Dictionary of Pirates by Jan Rogozinski 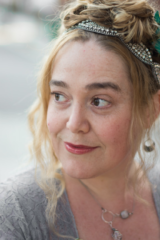 C. S. E. Cooney is the World Fantasy Award-winning author of Bone Swans: Stories. Her short novel, The Twice-Drowned Saint: Being a Tale of Fabulous Gelethel, the Invisible Wonders Who Rule There, and the Apostates Who Try to Escape its Walls, can be found in Mythic Delirium’s recent anthology, The Sinister Quartet. Both her forthcoming novel Saint Death’s Daughter and her story collection Dark Breakers, will be out in 2022. Other work includes Tor.com novella Desdemona and the Deep, and a poetry collection: How to Flirt in Faerieland and Other Wild Rhymes, which features her Rhysling Award-winning “The Sea King’s Second Bride.” Her short fiction and poetry can be found in Jonathan Strahan’s anthology Dragons, Ellen Datlow’s Mad Hatters and March Hares: All-New Stories from the World of Lewis Carroll’s Alice in Wonderland, Rich Horton’s Year’s Best Science Fiction and Fantasy, and elsewhere. When she’s not writing, she’s designing games with her husband Carlos Hernandez, and recording albums of mythy-type music under the name Brimstone Rhine.

One Response to “The Saga of Captain Jens”