Something in the Way: AI-Generated Images and the Real Killer

When I began my career as a science fiction/fantasy/horror artist back in the ‘90s, illustrations on book covers were created by illustrators. Or I should say, by human ones. Even back then, change was coming. It was in the wind.

Before that, comics were my first love, my first language. I was a child of the 1970s. Superhero comics were my first memories. That perfect alchemy of words and four-color pictures, drawn with pencils and inks, printed on cheap pulp paper between slick covers—Batman, Amazing Spider-Man, Fantastic Four, Justice League of America, Action Comics, the Spectre and more. I wanted to be a comic book artist and storyteller, more than anything else. That dream carried me through high school until I took a college detour through architecture.

After graduation, I was working by day as an intern architect, while writing and drawing my own comics in the wee hours. Those self-published comics ended up getting me noticed by book publishers and that’s when the science fiction and fantasy publishing world came knocking. In 1995, Mojo Press asked me to illustrate a 30th anniversary edition of Behold the Man by Michael Moorcock. I knew who Moorcock was but I wasn’t sure the job was for me. I still wanted to do comics. The publisher took me to Mike’s house. Mike talked. I listened. And that changed everything.

The way he carried himself as a professional, his humility despite being one of the undisputed giants of the field, his high standards and pure enthusiasm for SF/F made me fall in love with the book business. Mike became a mentor to me. I learned so much from him. He was part of a continuum across decades of SF/F literature, and I wanted to be part of that. Building a career as an SF/F cover artist was all I wanted to do. But even then, I realized that SF/F was a last bastion for illustrated cover art in the book industry as a whole. Iconic artworks created by extraordinary visionary illustrators were once seen across all forms of pop cultures and across all divisions of literature. But in the publishing business, SF/F was one of the few markets where that work was still hotly pursued and consumed.

Around the turn of the millennium though, I was seeing more and more publishers using less cover illustration, which may have saved them a few dollars, but generally made for some very forgettable covers. My career was ascending though, and cover art opportunities were coming my way fast and furious. I wondered if the next generation after me would be able to make a living creating book cover art, as I was doing. I realized it probably wasn’t going to happen for them, and I was probably amongst the last of the American illustrators who would have the chance to make a living solely creating book cover art. I was able to do that for the first ten years or so of my career, with some magazine illustration sprinkled in. But for the most part, book cover art was how I paid my bills and mortgage for over a decade.

As this current COVID-stricken decade has unfolded, the smart move has been finding new ways to diversify my earning ability as an illustrator. The one that made the most sense to me was creating my own stories, or at least co-creating them, and being part of the ownership of a story, rather than just the art that heralded it. It’s a future I’m still working toward, even as I study modern greats like Brom, Shaun Tan, Yoshi Yoshitani, Ruth Sanderson, Charles Vess, Dave McKean, and Greg Manchess blazing their own illustrated story trails.

Amidst this evolution, along come artificial intelligence (AI)-generated images (AKA “AI art,” which is not a phrase we should concede carelessly). AI image platforms are going to be a destructive force in the coming months and years. They’re evolving on a daily basis, and it’s clear that working artists are going to be decimated by this event. These platforms function by stealing the published work of working artists and using it without permission. This is not about inspiration or using creative work as reference. This is theft. Plain and simple.

I don’t subscribe to mantras that proclaim “art is dead” or “all pro illustrators are screwed,” BUT yes, the livelihoods of all working visual artists are in grave danger. The viable market is about to have a massive contraction. For writers and consumers of the written word, this may seem like a “ho-hum, I’m really busy here, thoughts and prayers” moment. But trust me, we’re all going to be lesser for this seismic shift. Each and every one of us. Yes, even you, dear writer. And oh yes, especially you too, dear reader.

Artists must always evolve. It’s in the nature of the role, right? But take note—the arrival of AI-generated imagery now heralds that artists who don’t have a very strong and urgent “why” baked into their future visuals will be obsolete. Probably already are. Why? Because the exponentially rising, infinite, crushing tsunami of technically pretty “hey, it looks cool” artistic dreck we’re about to experience is going to be unprecedented and “good enough” will become the standard for the vast majority of the audience who can type a few prompts and get what that they think they want.

Read that again—the AI itself may not be the end of art. It will be the end of many, many livelihoods. Entire portions of industry and work gone for good. Devastating. Heartbreaking. Culture-changing. But for those professional visual artists who do overcome that—an audience’s belief that “good enough” is sufficient will be the killer we can’t survive.

So it’s gonna come down to the question of “why.” Why does that next picture need to exist, and the power of that “why” will be what separates the magical work from the mundane. Has that always been the case? Yeah, I think so. But communicating the urgency of that “why” in the work itself is where we now are, and arguably is the most essential remaining value left for visual creators.

So that takes us back to asking if all the loss is worth the dopamine gains. Right now, the most addicted and binge-driven are the ones running the conversation about AI-generated images. Might be a need for that to change. The “why” takes us back to story and narrative, and not just narrative in a textual sense, but the kind of pure visual narrative meaning that words can’t do (sorry, wordsmiths). And yeah, I think AI is coming for the writers too. No doubt.

Machine-driven narrative will get better and better as the taste for popular narrative gets more and more watered down. And again, it won’t necessarily be because the AI does better work than working visual artists and writers, but because the audience settles for accepting the mass convenience of “good enough,” drowning out the need for quality of content. Audiences cherish convenience over quality. It’s what drives our ethos, at least here in the U.S. No reason to believe people are suddenly going to wake up and change.

The arrival of AI generated-images (and how industry chooses to use it) goes far beyond what happened upon the advent of photography or even Photoshop. This is NOT the same conversation. AI is a tidal shift from the center of human context that defines meaning. We’re not in Kansas anymore, Toto. Choose your yellow brick road very wisely, folks.

Personally, I’m gonna evolve. I’ll find a way forward amidst the carnage. To be clear, that does not mean I will collaborate with AI. That’s not my path. Mine lies in the opposite direction, finding ways for my most commercial work to be imbued with my most personal values. Same as I’ve done for more than twenty-five years—but with even more urgency, more context, more meaning, more “why.” What I’m not sure I can survive is that gaping disconnect of the human audience settling for “good enough.” That giant whale shape just under the surface…that swelling loss of human value that now extends beyond the horizon. It’s getting bigger. And unless we all recognize it—and our responsibility to oppose it—I realize that’s the one that may take us all down.

Back to the drawing board. 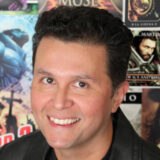 2 Responses to “Something in the Way: AI-Generated Images and the Real Killer”