As a child, I never struggled to find female authors to support. I’m lucky my parents fully supported my early (and expensive) love of reading, and that my preferred genre of fantasy was full of novels with great female characters and amazing women writers. But at thirty, a lot of my leisure reading is in shorter, monthly installments rather than 300–plus page novels. I read far more comic books now than I ever did as a child or a teenager, and while it does mean I’m reading a much greater number of creators, #ReadPOC2015 forced me to confront the fact that my current reading habits are even less diverse than those I had when I was eating YA novels for (and over) breakfast.

Much like K. Tempest Bradford’s challenge to read outside my comfort zone, I realized #ReadPOC2015 was the perfect rallying cry to change my reading and buying habits. There’s nothing inherently wrong with reading a book by white, cisgender, able–bodied, heterosexual men. A lot of my favorite authors fall into this category, but, as Bradford points out, the key is making sure they aren’t the only people represented. There are an increasing number of comic titles featuring under–represented voices, and I want to fill my shelf space with them.

In the first week of January this year, the sixth best–selling comic on Comixology’s site was the first issue of The Unbeatable Squirrel Girl, a female character who’s been the butt of many in–jokes in the Marvel universe over the years in part because of her unflagging optimism and unabashed femininity. Ms. Marvel, a comic written by two women (one of whom is Muslim) and illustrated by a person of color, stars a teenage Pakistani–American Muslim girl from New Jersey who talks like Tumblr come to life. It’s surpassed everyone’s expectations and was for a time the number one digital seller for Marvel. The fact is there are books being published now by DC and Marvel that I could not even imagine seeing even just five years ago. Batgirl’s (now former) roommate is a queer trans woman of color, and not just in subtext; the power of seeing a coming–out scene there on paper cannot be understated. Marvel and DC comics now contain hijabs and natural hair, dark skin and accents, scenes written in Spanish or ASL, bodies forged by hour–long commutes and fast food instead of super soldier serum and alien biology. There are things in books from the Big Two that humanize and affirm the lives their readers are living.

It would be easy to claim that the credit (or, depending on your perspective, blame) for this change in tactics is a result of the success of comic book–based movies, TV shows, and tie–in games drawing in new audiences of minority readers. There are many comics fans for whom the MCU and DCCU films and series such as Batman: The Animated Series, Justice League, Static Shock, Ultimate Spider–Man, Agents of SHIELD, Teen Titans, and Smallville were their first introduction to those characters. Comics–based video and RPG board games like Arkham Asylum and HeroClix are popular. And publishers are responding to the success of their screen–based efforts: look at Loki: Agent of Asgard—starring a young, pretty, explicitly queer Loki who is far closer to Tom Hiddleston’s version in the MCU than Marvel’s Loki of old. If anything’s an indication of the comics industry’s acknowledgement of this changing landscape, it’s Marvel’s announcement that they were rebooting the Thor title last year with a woman in the titular role—on the daytime TV show The View.

However, correlation isn’t causation and this assumption would also not be entirely correct. As Michael R. Underwood points out in this issue’s essay “21st Century Heroes: Representation in Marvel and DC’s Cinematic Universes,” the strides the MCU and DCCU films are making with regards to better character diversity are arguably not as large as their comic book counterparts. There are now more “gateways” for wider audiences to join long–standing fans in exploring comics, and even if those gateways can be somewhat problematic, the result of superheroes permeating mass popular culture is a larger number of marginalized consumers interested in the superheroes and searching them out in the comics. The visibility of minority comic book readers and their volume of demands for better representation have certainly increased. Gail Simone has a great story from attending a convention years ago where she listened to an employee of one of the Big Two bemoaning that there weren’t more female readers and wondering how to go about changing that—all while standing beside the very long line of mostly female fans waiting for Simone’s autograph. The point being that sometimes all the evidence in the world that straight white cisgender men aren’t the only consumers of comics could be staring someone right in the face, and it won’t make a difference unless they’re willing to see it.

While Marvel and DC are slowly starting to acknowledge the fact that their readers might be more diverse than they thought, and comics readers really do want more and better representation in the titles they read and are willing to pay for it, it doesn’t mean diversity in comics is anything new. Comics publishers and creators outside of Marvel and DC have been exploring more diverse worlds and characters for much longer, but with less mainstream recognition or acknowledgement. Comics like Dykes to Watch Out For, Strangers in Paradise, Maus, and Love and Rockets gave readers character deaths that lasted for more than a few issues, families with real crises that didn’t involve alien invasions, and explored narratives beyond those of the “capes and cowls.” Some of these explorations trickled into the consciousness of the Big Two. In the 1990s, DC partnered up with Milestone Media, a group of minority creators responsible for publishing beloved comic characters like Static Shock. (Sadly Milestone ceased publishing comics in 1997 due to low sales.)

Even more importantly, people who have not seen representation of themselves in books from the Marvel and DC have been turning to smaller publishers not only for stuff to read, but also to find jobs. As outlined by Janelle Asselin in a great round table discussion at the A.V. Club, minority creators are fighting issues of institutionalized discrimination and internalized fear when approaching the Big Two, and they’re increasingly paving their own roads. Watson and Holmes, a reframing of Arthur Conan Doyle’s classic tales of mystery in modern Harlem starring two black men is a prime example. The Pride, a superhero team comprised entirely of QUILTBAG characters, has found a niche on Tumblr thanks in part to some excellent cover art and a real thirst for more diverse books by fans there. Creators like Noelle Stevenson and Faith Erin Hicks are finding followings online, telling stories that they would never be able to tell at the Big Two, only to find themselves pursued by DC and Marvel after they’ve already won some level of success through their hard work. And they are not alone.

The internet, in particular webcomics publishing and the ability to crowdfund projects, has completely changed the comic book scene from the ground up. Marvel and DC now operate within the context of hundreds of thousands of other stories floating around not just in print, but online as well, just waiting for people to find them. Not only there are smaller independent publishing houses like Archaia/BOOM, Image, and IDW to contend with, there’s also content all over the internet with casts that actually represent the readers, and stories that feel true to their lives. Arrow and The Flash have been adapted for television, but so have The Walking Dead and iZombie. Even the surviving creators of Milestone Media are taking note: after shuttering their comics creation division nearly twenty years ago, Milestone announced that they’re reviving the company with an eye to focusing on creating new characters of color. As Megan Byrd of Women Write About Comics points out, people are voting with their dollars in complicated ways, demanding to see the kind of stories they want.

Peer pressure, it turns out, isn’t always a bad thing. Whether you enjoy titles like Digger, Saga, Pretty Deadly, and Questionable Content, or are excited for the new Avengers line–up and Marvel’s all–women title A–Force, there are more narratives available than ever before. There’s a lot of progress to be made still, but looking at the changes the industry at large has undergone in the past ten years alone, it’s hard not to feel optimistic. We’re still dealing with blunders and stereotyping, but they’re coming a lot less frequently than they once did, and people have started acknowledging the existing disparities and problematic portrayals. Now if only we could get rid of the refrigerator problem, we’d be set. I’ll get Captain Cold and Mister Freeze right on it. 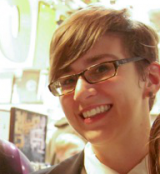 Caitlín Rosberg is a writing, knitting, tea drinking, baking machine with all the requisite robotic enhancements. She is obsessed with her dog and b-list comic book characters named Jim. An editor and counter-of-beans for the Ladies’ Night Anthology, she’s also a contributor to the A.V. Club’s Comics Panel. She likes talking and writing about the importance of safe spaces in nerd culture, independent publishing, and diversity in comic books. You can find her on Twitter as @crosberg. Ask her about Rhodey.

One Response to “Representation Matters: Embracing Change in Comics”