No Astra without Aspera

I grew up reading a lot of hard science fiction, particularly the vintages from the 1970s and 80s, which probably isn’t too surprising given my current occupation (astrobiologist). I liked how the books would challenge my imagination but kept me grounded within physical reality (give or take a few conceits as necessary).

What I found most intriguing was depictions of interstellar flight. It was one thing to just handwave the vast distances away with some sort of hyperdrive or other faster-than-light gimmick, but to see a writer lay out a truly plausible way that humanity could reach the stars was awe-inspiring. Whether it was Larry Niven’s ramjets or the small and sleek antimatter-powered craft from the works of Charles Pellegrino, the fact that people had sat down and worked out, at least approximately, what was required to reach nearby star systems enraptured me.

So, it was with great delight that I discovered the Breakthrough Starshot initiative—a project, funded by a few tech billionaires, to build a proof-of-concept interstellar probe and send it to Alpha Centauri. We, as a species, were finally getting real about exploring the stars!

Then I read the technical specs.

Based on my science fiction reading, I had always imagined that the biggest challenge to interstellar spacecraft would be simply generating enough power to propel them. For example, Pellegrino’s antimatter starships required covering a large swathe of the Moon with solar-powered particle accelerators to produce the requisite fuel, and Niven’s ramjets need both well-understood fusion propulsion and enormous superconducting magnetic scoops. In the case of Starshot, however, the technology involved for propulsion is actually quite well-known: as a light sail, it will be lofted into the stars with a phased laser array. While the array would have to be built on an unprecedented scale, spanning kilometers in size, the basic principles behind it require no new theoretical breakthroughs, unlike fusion or antimatter.

As it turns out, however, the tricky part isn’t the propulsion—it’s the actual spacecraft itself. Starshot’s design calls for a “gram-scale” probe, something that would make your average smartphone look like a gargantuan hulk. While we’ve certainly come a long way in miniaturizing electronics, designing a high-resolution imaging system with the same mass as a paperclip—and which will remain functional over the hundred-plus year span of the mission—almost defies reason.

Breakthrough Starshot arose, in part, from the 100 Year Starship project, a DARPA-led effort to try to tackle some of the technical hurdles posed by interstellar travel. From 2011 to 2015, the project awarded small-scale grants to relevant research and hosted an annual symposium. While some of the science featured was relatively pedestrian—investigations into preventing the loss of bone density and muscle mass due to prolonged microgravity conditions, for example—many of the involved researchers were focused on developing radical new forms of propulsion. Physicists proposed possible warp drives or wormholes that could make interstellar travel vastly faster and easier. The only problem was that, much like Breakthrough Starshot’s nanoprobes, no one actually has any idea how to practically build any of these technologies yet.

I would later discover I wasn’t the only one who was underwhelmed by these efforts. Author Kim Stanley Robinson was present at one of the 100 Year Starship symposia, and by all accounts, was dismayed by what he saw. In particular, he was discouraged by the idea that rather than taking care of our own planet we should just move to a new one. To be honest, I think this is a bit of a straw man—I’ve never encountered anyone who has seriously suggested that kind of planetary migration as a solution to our ecological woes—but, nonetheless, it motivated him to write a novel, 2015’s Aurora.

Aurora is the counterpoint to the interstellar dreams of the hard science fiction of my youth. The titular starship, filled with people hoping to colonize a new world, represents a massive economic undertaking—and one that proves doomed to failure. In Robinson’s universe, planets either already have their own indigenous life (which inevitably proves lethally pathogenic to humans) or are completely uninhabitable. To make things worse, when the would-be settlers give up and head back to Earth, the ecosystem of their generation ship breaks down, and only an unexpected technological fix saves them.

I will admit, as an astrobiologist who studies exoplanets, I find Robinson’s view on the subject unrealistically pessimistic. First off, given how fine-tuned life tends to be to its environment and biochemistry, it’s unlikely that an alien microbe would be able to adapt well to the very foreign environment of the human body. However, even if indigenous microflora did eventually develop a tolerance for human physiological conditions, we would still be far from defenseless. The human immune system is incredibly adaptive—I even remember my Intro to Immunology professor, way back, in the day, explicitly saying that we’d be able to deal with alien microbes. While we’d still undoubtedly face significant—and perhaps insurmountable—challenges into integrating into an extraterrestrial ecosystem, disease itself isn’t likely to be a showstopper.

Furthermore, as we’ve gotten better at modeling the evolution of planets, we’ve discovered there may be many worlds where interactions between water vapor in the atmosphere and ultraviolet light from the host star have yielded an abundance of oxygen—all in the complete absence of life. While this has been bad news for exoplanet scientists such as myself, as we now have a very real risk of false positives in our search for life beyond Earth, it’s good news for interstellar colonization. These worlds would be quite hospitable to us, but have no native biosphere to compete with us. However, in the long term, we’d still need to import our ecosystems in order to survive, which is no mean feat.

In fact, creating functional ecosystems is probably the biggest obstacle towards crewed interstellar travel, and one that I was very glad to see Robinson recognize. As a species, we still haven’t successfully constructed small-scale closed-looped ecosystems; the most well-known attempt, Biosphere 2, rather famously proved to be a failure when oxygen uptake by soil microbes present proved to be much higher than predicted. While that specific issue is much better understood today, it demonstrates the fragility of ecology at such small scales. When your margins are that tight, a single crop failure, unexpected algal bloom, or miscalculated rate of erosion can doom your whole population. If we are to take the slow route to other worlds—never mind setting up whole planetary biospheres from scratch—we must become vastly more familiar with the ecological processes that keep us alive on this one.

One possible solution to the delicateness of small-scale ecology is to simply make your ecosystem-in-a-bottle as large as possible. To do this, however, requires bringing an inordinate amount of mass with you. Ironically, the starship design perhaps best suited to this task is one of the oldest.

Starting in the mid 1950s, the US government initiated Project Orion, a study into the use of nuclear explosions to propel spacecraft. The project, led by physicist Freeman Dyson, not only found that such a concept was workable, but that it actually became more efficient as the spacecraft was scaled up in mass. Due to a quirk of nuclear weapons design, the same amount of enriched uranium is required to launch a 2,000-ton Orion vessel as was required for an 8,000,000-ton craft. The latter design, nearly half a kilometer in length and nicknamed “super Orion,” was explicitly envisioned as a self-contained city and “interstellar ark.” While small by the standards of Arthur C. Clarke’s Rama or Gene Wolfe’s Whorl, it would still give the Vanguard of Robert Heinlein’s Orphans of the Sky a run for its money. With a maximum speed a little over ten percent the speed of light, an Orion starship could make it to Alpha Centauri well within a human lifetime. There are even faster versions, making use of antimatter, but unlike the vanilla version of Orion, those remain beyond our current technology.

Of course, Orion has a major drawback: getting it up into orbit requires detonating dozens of nuclear weapons, and would violate several treaties in the process. One built in high orbit, away from the vulnerable Earth, may be more achievable in the future, but for now, that remains purely speculative. And it’s possible that size alone will not be enough—without further research, it’s hard to say if a larger closed-loop ecosystem would be sustainable, or simply delay the inevitable. Even a fleet of worldlets, like that seen in Kameron Hurley’s The Stars Are Legion, may still eventually break down over time.

Interstellar travel—whether it be in the form of robotic probes or crewed starships—would undoubtedly represent the single greatest effort ever undertaken by our species. Perhaps it’s just as well that we’re reminded of the enormity of what would be required of us to achieve such a dream. While it may very well happen someday—perhaps after some unforeseen technical breakthrough greatly reduces the mass and energy required—the current obstacles stagger the imagination. I wish Breakthrough Starshot all the best, but can’t help but think that they’re working in a realm perhaps best left to hard science fiction authors for the time being. Authors, in the meantime, can keep up with the current science (personally, I just check and see what’s on arXiv.org periodically), as this often provides a bountiful treasure of new ideas for stories. As Carl Sagan put it so eloquently in his last work, Pale Blue Dot, like it or not, for the moment the Earth is where we make our stand. 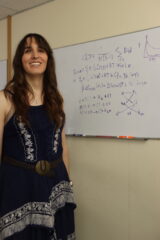 Tessa Fisher is a PhD candidate and possibly the world’s only openly trans lesbian astrobiologist. When she’s not doing science, her hobbies include burlesque dancing, singing in her city’s LGBT women’s chorus, yoga, and writing LGBT-positive science fiction and fantasy. She and her wife currently reside in Tempe, AZ, along with a fairly aloof bearded dragon.