Kannazuki, or the Godless Month

The moments turned in an instant; flash of anger in the eyes,
sheen of a black gun barrel, safety off, bullets fired and fired and fired.
The gods are not with us, they began traveling to Izumo.

We all wanted food before we lost everything—sense of touch,
taste, smell, the light inside our eyes dimming and skimming and dimming.

The gods are not with us, they are traveling to Izumo.

What worship there was to be had, what wafers consecrated, what wine.
What flash of white inside a white church. What warnings we had, over and over:

The gods are not with us, they are almost to Izumo.

Not getting involved, stepping away from the angry man festering in his corner,
Not listening to bruised women who always knew the scent of off before a gun would go.

At Izumo, the gods party, talk amongst themselves. Humans do not exist in this godless month.

A fin flashes in the waves, salted with mothers’ tears. Scales of carved jewels, the money dragon
traded his smiles for guns, live children exchanged for someone’s suit cut and handshake.
Ebisu, god of fishermen, is the only one to weep.

He of all the gods never travels to Izumo. 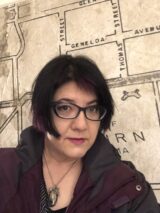