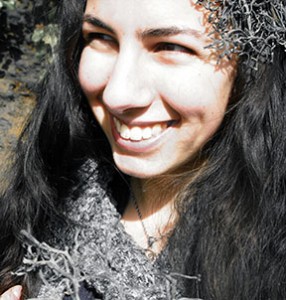 Amal El–Mohtar is the Nebula–nominated author of The Honey Month, a collection of spontaneous short stories and poems written to the taste of twenty–eight different kinds of honey. She is a two–time winner of the Rhysling Award for Best Short Poem, and edits Goblin Fruit, an online quarterly dedicated to fantastical poetry. Her work has most recently appeared in Steampunk III: Steampunk Revolution, edited by Ann VanderMeer, Chicks Unravel Time, a volume of essays on Doctor Who edited by L. M. Myles and Deborah Stanish, Queers Dig Time Lords, a volume of essays on Doctor Who edited by Sigrid Ellis and Michael Damian Thomas, Glitter & Mayhem, edited by John Klima, Lynne M. Thomas, and Michael Damian Thomas, and Kaleidoscope: Diverse YA, Science Fiction and Fantasy Stories, edited by Alisa Krasnostein and Julia Rios. Find her online at amalelmohtar.com.

When writing nonfiction — especially in reviewing books for NPR — there’s a feeling of legitimately getting to do good; the pleasure of having a high-profile platform through which to introduce people to the literature I love best is immense. With poetry, there’s usually some sense of having unlocked a sequence of tumblers with the right word, such that each reading is a spell or a key to something affecting. With fiction, there’s a pleasure, relief, buoyancy to the act of completing a piece of writing that’s unlike anything else.

I remember the day I knew I had to be a writer professionally. I was 17 and working in a bookstore in Ottawa, opening the shop for the first shift, and while in the back room I became aware of this almost uncanny (ha!) feeling of happiness. It was a golden, lifting feeling from absolutely nowhere. I’d had a perfectly normal commute, wasn’t looking forward to anything in particular — and then realised I could trace this glowing inward to the memory of having finished a story the night before. It wasn’t even a particularly good story! But I thought, very clearly, that if THIS feeling was what happened when I wrote, I should probably figure out a way to make it my living.

As to challenges — with non-fiction, it can be difficult to shift my style to suit a given venue. Years of academia mean that I’m sometimes doing overtime wrangling semi-colons into submission. With reviews specifically, trying to find something engaging to say about a book that hasn’t engaged me — a book about which I’ve felt no passion, either in love or hatred — can be tricky. With poems — I find it very hard to write poems to request. I’m never as happy with them when they’ve been deliberately tooled to some day-brain purpose. With fiction — I feel very keenly the fact that every story needs, in some sense, to constitute a leveling-up. I keep thinking writing short fiction should get easier as I go along, but no, in fact, every story I finish feels like the hardest thing I’ve done yet.

2) Your Nebula-nominated story, “The Green Book,” took elements typical in science fiction and re-imagined them in a fantasy world. How different do you think science fiction and fantasy actually are? Are there defined borders between the genres, or is there more crossover than people think?

So I only very belatedly — like, literally a year after publication — realised that “The Green Book” could be trans-humanism in a fantasy world if you squinted. But obviously stories of metamorphoses and humans retaining human consciousness in non-human bodies are tales as old as time, easily predating our ruminations on achieving that with technology. I personally think of science fiction as a subset of fantasy, and that they’re the head and tail of an Ourobouros, feeding and swallowing each other constantly.

3) How do you use your work to challenge readers?

This is such a great question. I actually turned to Twitter to ask readers how they felt I did this. “Putting politics inside lyrical tales like a delicious left-wing trojan horse,” was one answer; “by working in the interstices of literary forms and genres” was another. Charles Tan was kind enough to aggregate some responses here. Apart from those, there are some things that challenge people that I don’t think should, like women loving each other, or people being brown and opinionated — I’m always a little startled when someone says, “I really loved your story, pity it had to have lesbians in it.”

I don’t know about “the most” — I’ve had crows tell me when I had rejections coming up, mistaken hummingbirds for fairies, and seen gnome-creatures on the backs of birds resolve themselves into red-helmeted cyclists — but the first one to come to mind was a brief moment while I was in the UAE. It was dark — probably witching hour dark — and the 2nd floor flat I was in was lightless except for the screen of my computer.

I turned towards the windows, and became aware, out of the corner of my eye, of a face floating there. And for what felt like an age I was convinced there was someone at the window, floating 2 floors above ground level, staring at me. I turned to face it straight on — and saw, of course, that it was my reflection. But that feeling of the world tilting, of impossible things being possible, was very keen.

One Response to “Uncanny Mini Interview with Year One Contributor Amal El-Mohtar!”