I did not write a letter for Luminescent Threads, an anthology that I would eventually come to edit. I am writing this post in lieu of the letter I failed to write almost a year ago.

Luminescent Threads is my first book as a volume editor, but I didn’t come into the project until halfway through it. I had read and enjoyed Letters to Tiptree, but Twelfth Planet Press and its editors are based in Australia. I have never been to Australia. I came to the United States for the first time in 2015. I haven’t yet met in person all the editors I submit to, all the writers I read and love, all the writers who will send me their works the next time Uncanny is open for submissions. In India, where I grew up and learned to write, the consequences of baring one’s heart and vulnerabilities in writing are often too severe, especially for those who belong to minorities. I have always been more comfortable writing fiction and poetry—expressing my deepest thoughts in allusion and metaphor—than I have been with writing a memoir. I don’t talk about my life with strangers. I am constantly trying to pass as something or the other that is not entirely me, so that I can have friends, so that I feel safe and included, so that I have enough common grounds with anyone to be able to hold a conversation at all.

I had loved Letters to Tiptree, as had many others, but when I saw the call for submissions to Luminescent Threads almost a year ago, I did not feel ready to send them my own story. I had not met those people; they were white; and I had faced enough rejection, denial, and whitewashing of my life experiences by other people to not open myself up to another pair of strangers. Despite the fact that these people in question had published another compassionate and relevant book that I had enjoyed. Despite the fact that I was an Octavia E. Butler Scholar and wasn’t probably a completely worthless writer. Despite the fact that other people I knew and respected happened to know and respect them. I didn’t know these people, and I wasn’t going to take the chance of sharing my life story with them.

Why was I—why am I—so distrustful of strangers, even benign harmless strangers with no history of misbehaviour? (Some would say “paranoid,” a word I despise because of its connotation of mental illness. One of the weapons of gaslighting the minority experience has always been accusing the person of mental illness and subsequently distorted perception.) People aren’t born distrustful of other people; the baby always reaches out with undiluted curiosity and joy towards the thing that fascinates it. All distrust is learned—you stop trying to grab that bright flickering thing when you learn that it burns you; you learn that a smile is good and a frown is bad; you learn when the cat wants a cuddle and when it’s going to scratch.

And when you are a minority, especially if you’re the only one among your friends, you learn the hard way that the smiles that are meant for them are not always meant for you. That dynamic itself doesn’t change no matter how many levels you cross, how far you rise from wherever you started—you may outgrow your middle-school bullies, but there will always be smarter, subtler, more powerful versions of them lurking at the next place you go, then the one after. There will not always be precedents of bad behaviour for you to can take a warning from. Your non-minority friend may have nothing but pleasant interactions with someone but they may be “uncharacteristically” ghoulish to you, and often—more often that I wish was true—if you bring up the matter with your non-minority friend, they will be surprised and ask you if aren’t imagining the insult. (This is when you start to consider dropping them and acquiring a new set of friends, but that’s easier—and faster—said than done.)

Anyone who belongs to any minority knows what I am talking about. The girl who cannot convince her guy friends that their common friend is sleazy to her. The non-native-speaker student who never gets an A from the very helpful English teacher at school. The friend from a different religion who is tactfully overlooked from the dinner invitation at the parents’ house. Everyone who has ever felt inexplicably dirty and wounded by a “harmless” joke cracked at their expense.

The more minorities you belong to, the more unreliable that expectation becomes. Not all queer-friendly communities are equally friendly to trans people, queer people of colour, disabled queers, poor queers. Not all people-of-colour communities welcome all people of colour among them. I wish I could “be myself” around more people, but I have met more people in life than not who treat my friends differently from me. Until I have had a personal interaction with anyone, no matter what other people I know and love say about them, I am polite but aloof, never forthcoming with my struggles or confessions.

Why I am writing about these things in an article about a book I edited—am I not supposed to be on the other side of the table? I am writing because for this book, other minority writers have overcome that immense fear and vulnerability about rejection that I myself could not when I was on their side. And there’s something deeply valuable, deeply moving about that which goes beyond the mere words of their letters.

The biggest challenge when creating a book about a celebrated member of any minority is that by the time they become enshrined enough to be commented on, the loudest and most prominent commentaries no longer come from the communities from which the person has risen. Octavia E. Butler had been a working-class, queer, Black woman—very few of her readers, researchers, and people writing on her works for posterity can claim to be all three. Anyone who is on the editorial side of books and magazines knows this—no matter what subject we want to hear about, no matter how many heartfelt diversity statements we put out, the largest number of submissions still end up coming from white men with a certain level of formal education. I may be mistrusted by a stranger for the same anxieties that lead me to mistrust another, and it would be neither of our fault.

Minorities self-reject. We self-reject a lot. We self-reject no matter what age we are, or what level of success we have. We don’t only worry about not being good enough to be published—that is the first, and in many ways the easiest, hurdle—but if we do get published, what consequence our words will have on our lives, our careers, how much people respect us, whether we will get labelled whiny or angry or anti-national or whores or a number of other violent things, the safety of our families and friends. (We don’t do this because we are paranoid. We do it because this has been our experience—if not always personal, at least in the larger communal memory.) Every word I write I weigh against my possibility of ever going back home, of finding my family as safe as I left them, of being able to live and work in India again. Backspace happens to be the most worn down key on my computer.

This entire anthology, in that way, is a triumph over the backspace key. While I went through them trying to fix spelling and syntactical errors, the letters in this anthology made me cry for their honesty, bravery, anger, vulnerability—everything their authors have been willing to share with others. A simple publication credit isn’t worth that kind of stripping down of the self; there is something bigger. There is striving towards healing, strengthening, consolation, solidification—both of the self and others whom those words will reach.

Most of our letters came in right after the US presidential elections, and there is a direct, unabashed political rage that emerges in many of them. These writers committed to those words at a time when I was myself too afraid to even name the President on any of my social media accounts—I hadn’t voted for him, but I had never been eligible to vote for him, and he wanted people like me thrown out of his country anyway.

The first person those words embraced and held back from crumbling was me. At a time when I was no longer sure if I was worth anything to anyone in the US any more, and should not just give up and leave on the first flight home, they convinced me to hold out a little longer, endure a few more days of bleakness, before other friends came along—more luminescent threads from strangers that have strengthened and sustained me through what has been probably the worst year of my life. I was not an editor at Uncanny Magazine when I started working on this book, and now I am. I go out a little more, I initiate conversations, my words encounter a little more of CTRL+S and little less of backspace. That is what working on Luminescent Threads has done for me, and I hope reading it does that for you too, at the time when you need it the most. 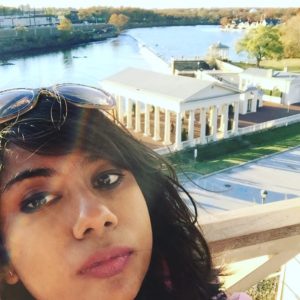 Uncanny Magazine’s Reprint/Poetry Editor, Mimi Mondal, was born and raised in Calcutta, India. In various incarnations, she has been an editor with Penguin India, a Commonwealth Scholar at the University of Stirling, Scotland, and an Octavia E. Butler Memorial Scholar at the Clarion West Writing Workshop 2015. Her stories, poetry, and social commentary have appeared in The Book Smugglers, Daily Science Fiction, Podcastle, Scroll.in, Muse India, Kindle Magazine, and elsewhere. She is the co-editor of Luminescent Threads: Connections to Octavia Butler (2017) from Twelfth Planet Press. Her first collection of stories is also forthcoming in India from Juggernaut Books. Mimi almost always enjoys the company of monsters.