As the Doubleclicks, musician duo sisters Aubrey and Angela Webber create delightfully geeky, sweet, and sometimes snarky songs. Since debuting on YouTube in 2011 with a weekly songwriting project, the Doubleclicks continue to make meaningful music that has audiences both laughing and crying about dinosaurs, nights in watching Netflix, and what would be the Worst Superpower Ever. They’ve toured the country appearing at cons and other events, been featured on programs like The Nerdist and NPR, and produce a touring variety show called #NerdNightOut. Managing Editor Michi Trota recently had a chance to catch up with Angela and talk about celebrating one’s geekiness, addressing issues of inclusivity, and what fandoms inspire the Doubleclicks’ music.

Uncanny Magazine: You’ve spent quite a bit of the summer on tour across the country. That’s a lot of travel and energy to share with your fans! What’s your favorite part about touring?

Angela: The shows! It’s really fun because each city has a different personality, but all of them will sing about cats with us. I feel very excited and warmed about the state of humanity when I’m in a room full of nerds.

Uncanny Magazine: You’ve released three full studio albums, two EPs, a demo album, and several individual songs. You’ve developed an enthusiastic and supportive fanbase, much of it online, since your first YouTube project in 2011. How have platforms like YouTube and Patreon affected your ability to interact with your fans?

Angela: YouTube, Twitter, and our mailing list have been the biggest help in connecting with our fans. I’m really glad that we’ve been able to connect with folks from the very beginning, and that they have stayed in touch and followed us from our very low–fi early YouTube videos from my basement to the tours and conventions and albums that we do today. Being able to connect directly with an audience is such a huge benefit of the internet, and makes it possible for folks like us to skip the need for a manager, PR company, radio placement team, label, booker, and agent, and just get our music straight into the hands of the folks who want it. Patreon and Kickstarter are great media through which our fans have generously supported us through the years. It’s really cool to be able to make the things for our people with no one in–between telling us what to do and how to do it.

Uncanny Magazine: Three years ago you released “Nothing to Prove,”* a song which pushed back against the idea that nerds and geeks, especially if they’re not men, have to prove their “nerd cred.” Do you think gatekeeping and issues of inclusion in geek communities have improved since then?

Angela: That’s a complicated question! Over the years, the issue has evolved from “fake geek testing” to “GamerGate” to twitter hacks and trolling about the election, race, Ghostbusters… On the one hand, there is still a strong, vocal contingent of trolls trying to ruin people’s day for no good reason. On the other hand, I do think the conversation about inclusiveness in the geek world has improved, opened, and elevated, and that’s great. Amazing groups like Geek Girl Brunch, Black Girl Nerds, and countless podcasts, inclusivity–based conventions and sites have developed a strong voice, and that is rad. I don’t think we’re ever going to get rid of the voices of negativity and trolling, but we can remember they are a tiny amount compared to the rad people focusing their energy on elevating the nerd world and underrepresented voices!

Uncanny Magazine: Finding inspiration in and being able to poke fun at the fandoms we love is often at the heart of your music. You’ve referenced shows such as Buffy the Vampire Slayer and The X–Files, as well as Dungeons & Dragons, superheroes, cats, and dinosaurs—are there any fandoms or characters you haven’t yet written about that you’d like to?

Angela: It’s hard to know where we’ll go next. We usually start with a message and the feelings, but you’re right—nerd stuff does often sneak its way into what we’re doing. We just released a song and music video called “Lord of the Rings”—the books and movies are a big emotional part of my life, so it was amazing to be able to dress up as the characters and majestically reclaim that franchise in our own way. The song, ultimately, is about something much different than the Lord of the Rings, but it was definitely great to get that out there.

I don’t know what nerdy place we’ll go next, but we have some songs about self–esteem and depression coming soon that I’m sure will be inhabited by the dorky stuff that’s on our mind when the songs come together.

Uncanny Magazine: You’ve been outspoken about creating inclusive, welcoming spaces in nerd communities. Why is this so important to you?

Angela: I think it’s just intuitive. Until I found geek culture, I felt like a broken person who would never fit in, who was just “built wrong,” and it made me angry and vengeful. Geek culture was there for me when I needed it, and I think that we should offer that same sense of acceptance to everyone. The forces of negativity are still around, but we need to approach folks with empathy to demonstrate that we can be in here together, and welcoming in voices that are different than our own can only elevate us.

Uncanny Magazine: What are some books, TV shows, games, or other nerdy things that you’re particularly enthusiastic about right now?

Angela: We’re playing a lot of Betrayal at the House On The Hill—the expansion just camp out (and we were asked to write for it!) so we are experiencing the cool tone of the new haunts and mechanics there. We’re also playing lots of Fiasco—as always—a game we like so much that we decided to start a podcast (Gosh Darn Fiasco!) so we can play it with our friends. We’re also loving Luke Cage, Steven Universe, Supergirl, and can’t wait for iZombie to be back. The piece of media I’m most excited about is nerd–inspired rapper/producer Sammus’ new album. We heard some of the tracks on tour with her last year and it’s going to blow people’s minds when it comes out. She says tons of important stuff about the world (not just the nerd part) and she rules.

Angela: Folks can subscribe to us on YouTube for upcoming videos and check out our live online show #DoubleclicksLive on Thursday, November 17, 2016, 6pm Pacific/9pm Eastern. People can RSVP and request songs on our Facebook event page, too!

Uncanny Magazine: Thanks for taking the time to talk with us!

*Editors’ Note: Michi appears in the music video of “Nothing to Prove.” 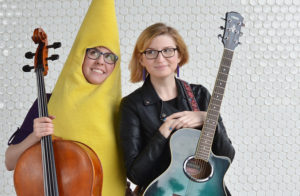 The Doubleclicks (http://thedoubleclicks.com/) are a folk–pop sister duo, featuring clever lyrics about dinosaurs, literature, love and the Internet—with a cello, guitar, and meowing kitten keyboard. Their latest CD President Snakes debuted in the top 10 Billboard comedy albums chart, and their 2014 release Dimetrodon was funded by a $80,000 Kickstarter project. Their songs and YouTube videos have been viewed over 3 million times and are featured on BoingBoing, Kotaku, Huffington Post, and on NPR shows Live Wire, All Things Acoustic, and State of Wonder.