Last fall, Tracy Townsend’s debut fantasy The Nine, the first of the Thieves of Fate series from Pyr, brought readers a world of gaslamp intrigue, clockpunk technology, and deadly politics tangled up in scientific research and religious mythology. When a book that writes itself is revealed to be the key to the Creator’s Grand Experiment, forces beyond humanity take a keen interest in it and the nine subjects its data seems to track. The aigamuxa (a horrifying, ogre-like species with eyes in their feet and a thirst for vengeance against the humans that enslaved them) and the lanyani (sentient, mobile, murderous trees turned nomad by mass industrialization) mean to put their thumb on the Creator’s laboratory scales. The mysterious Alchemist, the notorious mercenary Anselm Meteron, and their light-fingered ward Rowena Downshire may be the only ones standing in their way.

You can start 2019 off right by returning to the world of the Thieves of Fate in The Nine’s sequel The Fall! And great news, Space Unicorns! Today, we give you its stunning cover, with art by Adam S. Doyle, the plot blurb, a teaser from the book, and the pre-ordering information so you can get this novel when it is released on January 15, 2019!

Would you like a chance to win a copy of The Nine so you can get started on the series and ready for The Fall? Just leave a comment here (or Tweet with the hashtag #uncannythefall) with your idea for the strangest non-human species! You have until 11:59 pm Central on Monday, June 11! One of you awesome people will be chosen at random to win the first in this dramatic series — and this includes international entries, so everyone can play along! (THIS IS OVER, BUT THANK YOU TO EVERYONE WHO PARTICIPATED!)

And now, THE COVER OF THE FALL! 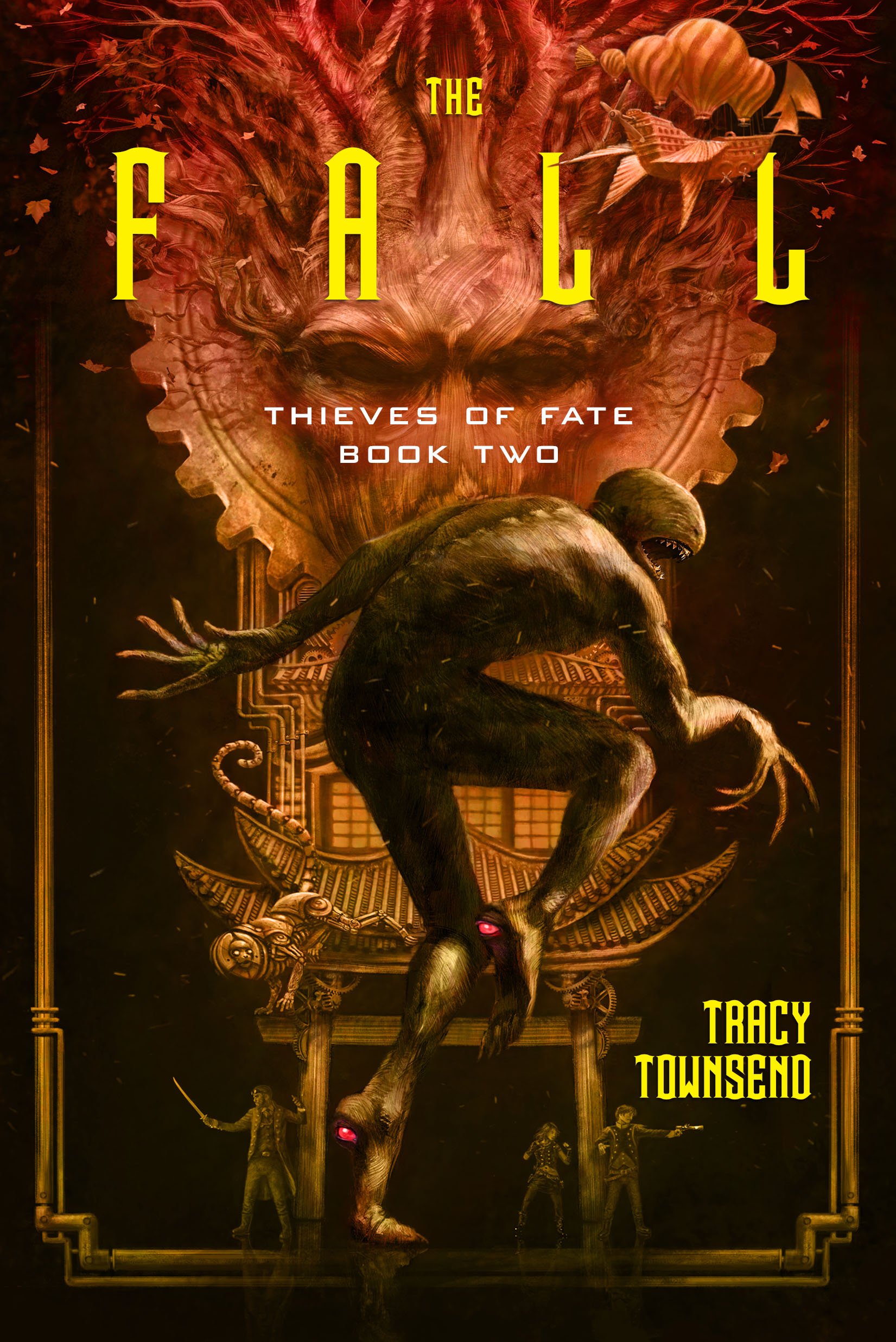 An apothecary clerk and her ex-mercenary allies travel across the world to discover a computing engine that leads to secrets she wasn’t meant to know–secrets that could destroy humanity.

Eight months ago, Rowena Downshire was a half-starved black market courier darting through the shadows of Corma’s underside. Today, she’s a (mostly) respectable clerk in the Alchemist’s infamous apothecary shop, the Stone Scales, and certainly the last girl one would think qualified to carry the weight of the world on her shoulders a second time. Looks can be deceiving.

When Anselm Meteron and the Alchemist receive an invitation to an old acquaintance’s ball–the Greatduke who financed their final, disastrous mercenary mission fourteen years earlier–they’re expecting blackmail, graft, or veiled threats related to the plot to steal the secrets of the Creator’s Grand Experiment. They aren’t expecting a job offer they can’t refuse or a trip halfway across the world to rendezvous with the scholar whose research threw their lives into tumult: the Reverend Doctor Phillip Chalmers.

Escorting Chalmers to the Grand Library of Nippon with her mismatched mercenary family is just a grand adventure to Rowena until she discovers a powerful algebraic engine called the Aggregator. The Aggregator leads Rowena to questions about the Grand Experiment she was never meant to ask and answers she cannot be allowed to possess.

With her reunited friends, Rowena must find a way to use the truths hidden in the Grand Library to disarm those who would hunt down the nine subjects of the Creator’s Grand Experiment, threatening to close the book on this world.

Praise for The Nine:

“The Nine is a tense, fast-moving and twisty caper, with divided loyalties, creepy monsters, and grand mysteries. More please!”

“An inventive alloy of low-fantasy grit and saucy gaslamp caper, by turns both uplifting and brutal—I dug the world, I loved the characters, and I definitely want to know what happens next.”

“George R. R. Martin and China Miéville have nothing on the audacious, intricate world-building, gritty politics, and compelling characters in this excellent debut.”

“The Nine drew me in and twisted me up with not just its richness and complexity, but its intensity and heart, too. I honestly can’t remember a debut novel as brilliant as this one.”

An excerpt from The Fall:

Anselm introduced her to the curious and kind, and to the clearly dissembling, and in less than a quarter hour, his confidence made the words, “This is my niece, Rowena,” seem nearly true. Even Rowena could have believed it. In a way, she wanted to, as they took to the dance floor.

“Tell me which of these ladies watching you with such envy is wealthiest. I’ll give you a clue: you can’t tell by the dress.”

Rowena flicked her gaze over to them, scanning up and down. “’Course you can’t,” she sniffed proudly. “You can get really nice dresses on credit, if you’re keen to. Jewelry, too.”

“Gloves and hairpins prove it best,” she whispered back. “Nobody lends gloves because they get all soiled holding hands in dances or picking up refreshments. And nobody just drops their fancy borrowed choker and doesn’t notice. But hairpins fall out all the time.” She nodded her chin toward a curvaceous woman in an ecru gown chased with rose and ivy patterns. Her ginger hair was a confection of jewel-studded clips and curl-pins. “She’s probably got a couple thousand sovereigns just poking out of her head, and they drop out all the time. You have to be a special kind of rich not to care about shedding wealth like hairs in a brush.”

“Very good. That’s the Greatduchess Avergnon—the new Lady Avergnon, I should say. Her great-aunt did her the favor of dying in her sleep back in Threemonth and leaving a surprisingly vague will behind. She’s very eager to consolidate her position with a suitable match.”

He snorted. “She might like my money but not what it would do to her reputation.” Another step, turn, pass. “Now try the same game again, cricket, but with the gentlemen. Tell me what to look for.”

“Pocket chronometers—ones without yellowed faceplates. And what the buttons on their waistcoats are made of.”

Anselm’s laugh showed his teeth for one, unguarded moment. “If I didn’t know better, I’d think you had spent your life casting for wealth at the local gentry’s balls.”

“Well. Over there are two ministers from the Governor’s cabinet and a visiting dignitary from Iberon. Shall we introduce you?”

He took her arm and winked. “Be as confident talking to them as you are talking about their clothes and you’ll do better than most, cricket.”

Pre-order links for The Fall!

4 Responses to “Cover Reveal for Tracy Townsend’s The Fall”