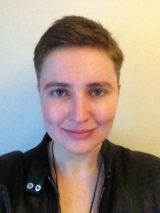 Foz Meadows is a blogger, author, essayist, and reviewer whose writing, both fictional and critical, has appeared in venues such as The Mary Sue, Apex Magazine, The Huffington Post and Goblin Fruit. In 2014 she was nominated for a Hugo Award for Best Fan Writer for her blog, Shattersnipe. Her latest novel, An Accident of Stars, is an epic portal fantasy due out from Angry Robot in August 2016.