“You Have Only Your Trust in Me”: Star Trek and the Power of Mutual Belief

I cannot remember a time before I loved Star Trek. I was two years old when The Next Generation premiered in 1987, young enough that the characters, world, and ideals of that show seem like innate knowledge. Eight years old when Deep Space Nine began, and those two shows raised me like a third parent, or as an extension of my mother, who watched them with me and impressed upon me what was the most interesting, the most important, the most beautiful. There’s an endless list of conversations I wish I’d had with her while I still could and some of those are about Star Trek. I know that she trusted Captain Picard implicitly and she thought Deep Space Nine’s opening theme song was exquisitely haunting. I know that she knew I had a secret crush on Doctor Bashir. I know that she liked that the characters were engaged in the hard work of being intentionally ethical—that is, not just being good people because that’s who they inherently were, but being good people on purpose, and through struggle. And I know that she enacted every day something that we saw time and again on Star Trek: she trusted me to know my own mind, even when I wasn’t sure of it myself. I know how lucky I was to have that as a fundamental underpinning of my upbringing.

There’s a thread in these shows that has to do with meeting people where they are, and it plays out over and over, almost always unremarked upon. It usually goes something like this:

First, a character has an experience that they can’t understand or explain. Maybe they saw an impossible creature moving with intention inside the usually-empty void of the transporter beam. Or they heard disembodied voices muttering when they were alone in their quarters. Or they simply woke up feeling absolutely, unshakably certain that the shape of reality was suddenly changed, and horribly wrong. All of these are common enough set-ups in genre fiction, and none of them are unique to Star Trek. It’s in the next step that these characters do something that can make them seem as alien as any Gorn in a loincloth. Because their next step, almost without fail, is to take their concerns directly to their boss.

Now, certainly there are a wide variety of professional relationships in the world. Far be it for me to say that nobody outside of Starfleet has ever taken their intense feeling of déjà vu straight to management. That said, it’s been my experience that employers have required a doctor’s note to explain prolonged absence due to illness, a legal ultimatum to include transition-related healthcare in their insurance coverage plans, and would be uninterested in hearing about my unspecific-but-absolute feeling of unease. When I look at it closely, the fact is I don’t trust any boss to care about me as a person, nor to believe me when I say something they don’t necessarily want to hear. I don’t think I trust my university’s administrators in that way either. I haven’t been in any organization with the sort of military hierarchy that Starfleet mimics, so I won’t speak for those people. I will point out there is ample evidence that those command structures do not automatically create a safe or trusting environment. The reason it’s so strange that Lt. Barclay or Chief O’Brien or Kes take their inexplicable experiences to their respective captains is that it’s strange to realize they do this because they expect to be believed. And they expect to be believed because that’s Star Trek ‘s baseline assumption: these are people who will not deny each other’s subjective realities. They’ll try their damnedest to believe each other, even when it gets weird. In more than 750 episodes of Star Trek, it is vanishingly rare for a plot to hinge on a crew member being automatically disbelieved or shunned.

The default-to-belief is so pervasive in Star Trek that it stands out the most when it works against them. In The Next Generation episode “Sub Rosa,” Counselor Troi feels compelled to take at face value Dr. Crusher’s decision first to read and recount the erotic exploits in her grandmother’s diary, and second to become romantically involved with the very man her grandmother had been writing about. Troi expresses some friendly reservations, but never questions that Dr. Crusher is capable and entitled to make her own decisions. The tension in the episode comes not from anyone disbelieving Dr. Crusher, but rather from them wanting to believe her, even when she resigns her commission and leaves the Enterprise to live in romantic isolation with her grandmother’s lover. It takes the mysterious lover attacking Picard, raising grandma from the dead, and revealing himself to be a near-immortal, alien parasite for everyone to realize that perhaps they could have questioned Dr. Crusher a little sooner.

The same theme also helps add tension to episodes that deal in long-established genre tropes which might otherwise bog down the pace of an episode while the characters struggle to grasp the situation. While a viewer might very quickly catch on to something like a time loop episode, where the pacing is absolutely paramount, most movies and shows that use that device find themselves sinking way too much time into showing characters figuring out what’s going on. (Presumably, the movie Groundhog Day doesn’t exist in most fictional worlds.) But, because characters on Star Trek assume each other’s intelligence and good faith, when one of them is stuck in a time loop, or a disintegrating reality, or some other brand of distressingly-alternate universe, they can tell their crewmates what’s happening to them and trust that they’ll soon have help in working the problem. Voyager’s third-season episode “Before and After” is an example of where Star Trek didn’t waste any of the viewer’s time in getting everyone up to speed. As Kes travels backwards through time, she immediately tells her crewmates what’s happened after each jump, and each time they absorb the information, recognize the seriousness of the problem, and offer to help in any way they can.

There are also examples of characters who’ve existed outside of the circle of trust being brought into the default-to-belief culture, such as the series-long character arc of Elim Garak on Deep Space Nine. He came from a society, a family, and an organization that valued paranoia and distrust, had these values baked into his bones. Over the course of seven seasons, members of the crew gradually decide he’s one of theirs now, and that they will trust him. Garak rails against this treatment, at his worst he spits in its face, mocks it, rejects it as hopelessly naïve. But they just keep placing their trust in him and expecting him to do the same of them. Even when he fails them, they recognize the failure and then offer trust again. There’s something so achingly hopeful about watching that work. Slow, patient, difficult years of telling someone that they will be believed, they will be trusted, and of enacting that belief until it’s true.

Statistically speaking, very few of us will ever get caught in a time loop. There are other ways to feel stuck in a place where nobody can reach you, though. The World Health Organization estimates that one in four people will experience a mental illness at some point in their lives. Recent surveys of LGBT people in Australia and the US found that nearly half of respondents were closeted, a result heavily influenced by the especially low numbers of bisexual men who reported being out. The US Department of Justice’s statistics show that roughly 3 out of every 4 sexual assaults are unreported, certainly connected to the fact that only 5 out of every 1,000 rapes will result in a felony conviction for the rapist. Maybe it’s these facts of our world that make Garak’s point of view so accessible. By the numbers, we have more in common with a society built on mutual distrust than we do with one that values each other’s emotional health enough to make a mental health counselor a bridge officer. I struggle in my own life and my own writing against the tendency towards cynicism. Trust is a slow-acting salve. Or a supplement, maybe, like how you have to take melatonin every night, on and on, until your body trusts that it’ll be there, and lets you rest.

My other family, the one I found later in life, is a trio of queers, their two absurd dogs, and their young son. I moved into their home as a roommate, didn’t realize I was getting a family, and to my shame I utterly distrusted the intimation that any lasting relationship among us as a unit could include me. While they were nothing but welcoming, absolutely embracing, and completely trusting, I stewed in my own paranoia. Before their son was born, I panicked and plotted means to move out, even though I certainly couldn’t afford to and even though they’d made clear I wouldn’t have to. I mentally cordoned off what areas of our home I had a right to (literally only my room), and which parts I should act like a deferential guest in (all other shared spaces). To their eyes, I probably acted like a bit of a weirdo. I hid a lot. I turned down a lot of hangouts. But they just kept trusting me, and inviting me, and treating me like one of theirs. They acted like a world where I was part of their family was possible, and because they enacted that belief and trust in me every day, eventually I started to believe it too. It seems miraculous when I think about it now, years later. They believed in something so much that they made it true.

Now my father, from my first family, he’s not big into fiction in general, much less science fiction. After a long while he’s come to accept that it’s something I’m passionate about, and he respects that, but also circles back to asking why anyone should spend their time in a fantasy world when the real world is here, desperate for us to tend to its many needs and hurts. He’s a man who, like my mother, has worked his whole life to further causes of social, economic, and political justice, and when he doesn’t have a potentially world-saving project to work on, he gets itchy. It’s funny to me sometimes that he can’t see how science fiction so often exemplifies how imagination and action must work hand-in-hand: they believe in each other, and they act on that belief, and through those actions, they create a better world. Star Trek’s characters, like all of us, live in a universe full of injustice, suffering, and struggle—not a utopian vision, but an optimistic one, because they also live as if that better world is possible. We have to do that. We have to. When someone tells us that they’re in distress, in pain, in danger, or in a time loop, we have to say “I believe you. I’ll help however I can.” 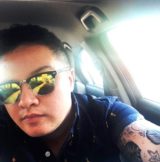 Nicasio Andres Reed is a Filipino-American writer, poet, and essayist whose work has appeared in venues such as Strange Horizons, Lightspeed, and Shimmer. Nico has gone back and forth between the United States and the Philippines over the years, and is currently pursuing an MA in creative writing at the University of the Philippines-Diliman. Find him on Twitter @NicasioSilang.

One Response to ““You Have Only Your Trust in Me”: Star Trek and the Power of Mutual Belief” 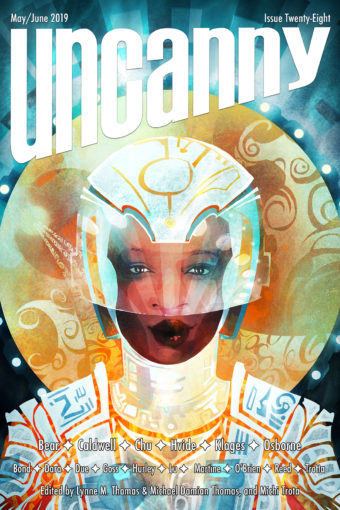