I don’t know what it is. When I was younger, I was made to believe it was polio, and then I met survivors of that disease and it put doubts in me. Now, I think maybe it’s clubfoot. I could ask my mother, but then, I don’t have the urge to find out. I don’t want to know if I was born like this, or if it came after I fell sick, because in my dreams I don’t have a disability. I have a “normal” body. I run. I walk without a limp. I play soccer. My ankle is not twisted and looking swollen, my toes do not face downward.

Often, I’m surprised when someone asks me, “Why are you limping?” I never know how to respond, for in my head, I don’t limp. Maybe because it is only a slight limp, often noticeable when I’m really tired. But mostly because from a young age, I was treated with ambivalence. While they saw I was different, they compared me to those who used wheelchairs, or crutches, or leg braces, and they would say, “You are not really lame.” They would look at people without limbs, at those who have to crawl, and would tell me, “You are lucky.” Maybe this stuck and makes me think I’m not really disabled. One incident that still haunts me happened at school. Those with disabilities didn’t have to queue for food. I walked into the dining and went straight to the counter, but a prefect stopped me, saying; “You are pretending to be disabled so you can jump the queue.” Many people laughed. Some who knew me came to my side, and the prefect, not convinced, asked me to walk so he could decide if I was faking it. The humiliation still burns me.

I used to think that this kind of background made me see myself, in my dreams, as not disabled. Then I went to Nepal and met a young, blind woman, Sristi. She told me that she saw me in her dream and that I did not have a beard. I was puzzled. “Do you see in your dreams?” I asked her, and she replied, “Yes.” I’ve not researched how people with disabilities see themselves in dreams, but meeting Sristi made me wonder if our brains are hardwired to see ourselves in a certain way, no matter how sickness or unfortunate circumstances have transformed our bodies.

How I wished society would see it this way too, but it does not, and growing up, for me, was hell. The stares made me feel horrible. I sometimes still hear the laughter, often from my own brothers who were ashamed of me. It still stabs deep, creating wounds that refuse to heal. And then there was the isolation, being made to feel unwanted, a burden. Useless. At that time in the 80s, my country was in a fragile place, with war threatening to break out anytime. “How will you run when fighting starts?” they would ask me. “We shall leave you behind.” Today, I flinch every time I see conflict in the news. I hear about war refugees and I wonder how those with disabilities made it out, if they ever made it out.

By the time I was fifteen years old, I was a loner, always buried in a novel. One I remember too well was The Stand, by Stephen King, which I read at about thirteen. It frightened me, mostly because it was set in a post-apocalyptic world, something that could have happened to my town, not through a flu, but through war. I imagined myself left behind, and having to walk miles and miles and miles. Alone.

Around this time, I started to write. Stories always made me feel good, and writing them gave me a purpose in life, a future to look forward to. I soon ran away from home to take my book to a publisher in Nairobi. I thought the publisher would instantly fall in love with my book, and give me a lot of money, and that would solve all my problems. It did not turn out like that. On returning home, I found my family panicked and furious. I wrote my mother a letter, trying to explain why I ran away, why I desperately wanted to be published. I mentioned something about suicide, which I insisted I wouldn’t think about because “…in this useless body of mine, I’ve discovered something useful…” I don’t know what else I wrote in that letter, but that phrase stuck. I put in “useless,” not because it is how I felt about my body, but because my mother had used it when describing me to one of her friends.

I don’t think I ever felt useless. While in my dreams I did not see myself as disabled, in my daydreams I saw myself as worthier than everyone around me. I saw myself as a king of sorts, as a superhero, as a boy full of secret powers. Soon, some people started to whisper that I was unstable, for I daydreamed a lot. Maybe too much. One day one of my brothers reported me to the rest, saying, “I saw Dilman walking in the market. He had a gait as if he owned the whole town.” I believe I built for myself secret worlds in my subconscious, where I gave myself new identities, a new kind of living, and I brought that world to life when I started to write. I wanted to change the world’s perception about me. I wanted them to stop seeing me as a limping creature. I wanted them to see me as I saw myself in my dreams, as I imagined myself in my daydreams.

And yet, I almost never wrote about characters with a physical disability. It happened only twice in novels. Both have never gotten published.

Then, sometime in 2015, I met a girl. “You are Dilman Dila!” she squealed. I’m not a celebrity. I think the little success I’ve had has pushed my name out there, but the way this girl behaved, you’d think she had run into Brad Pitt. She had read all my published works, seen all my films. We dated for a few months. Then one day we went to a movie, and the elevator was broken, so we had to use the stairs. I hate stairs! At the top, she looked at me with a frown and asked, “Why are you limping?” I was a speechless for a few seconds, but then, I told her, “I’ve always limped,” and she said, “Why did you hide it from me?”

I didn’t know how to respond. She had called me a liar and I just did not know what to say to defend myself. We watched the movie, an awkward silence between us, and she ghosted me after that night.

I keep turning her question in my mind. Why did you hide it from me? Did she mean Why do you never write about protagonists with disabilities? Her question bothers me, makes me wonder: If she saw disabled people in my stories, would she have been upset on finding out that I limp?

Maybe, I told myself, the reason I had a hellish childhood was because my society had been conditioned to think people with disabilities are useless, or cursed, or bearing crimes from past lives, or are evil. It’s not only Hollywood and Western literature that paints disabled people as the bad guys. Growing up, I kept hearing this comment: “God knew you would have been dangerous, so he made you lame to control you.” This realization put a burden on me. I don’t want to be a spokesperson, nor do I want all my stories to have only protagonists with disabilities, but I know stories have the power to change society, and I want society to change its attitude towards people like me. I don’t want a girl to ghost me simply because I limp. I don’t want a family to reject a child simply because the child has a disability.

So early in 2016 I wrote my first short story with such a disabled protagonist. It got published a few weeks ago. The second short story came out in A World of Horror. Then, this year (2017), I started on a novel about a boy, Ocan, who uses a wheelchair, and whose parents leave him behind to die when war breaks out. He survives, and has to flee through a war-torn country, searching for somewhere to call a home. I wrote 120,000 words in about three months. It surprised me. I thought I’d written a pile of garbage for I had never managed that quantity in so short a time, especially as I had a lot of work and traveling. I sent the first few chapters to a publisher, and even before he finished reading the sample, he sent me a message saying, “Wow!” Though he agreed to publish it, I later withdrew it so as to finish it without the pressures of a publishing deadline.

It leaves me confused. Writing 120K words in three months can only mean that the story has been deep inside me all this time. I had never thought about Ocan, or his quest, until a day before I started writing, though that world is one of my favorite daydreams. Still, I daydream about many worlds which I’ve struggled to bring to life. So why did Ocan gush out like that? And once he is out, will people know me enough to stop asking that question: “Why do you limp?”

I don’t know if writing protagonists with disabilities is supposed to lead me to accept my body. The way I see myself in my dreams has not changed. The way I see myself in my daydreams has not changed. I still grit my teeth every time I face a flight of stairs. I still groan every time I have to walk up a long hill. I still shy away every time I meet a girl, for I imagine she’ll also take a look at my legs and flee. I don’t think I’ve ever rejected my body, nor seen myself as useless. Maybe I have and just don’t know it. Maybe I live in denial. Maybe it will take writing many more stories for me to accept my body. I don’t know. But I thoroughly enjoyed writing Ocan and I look forward to writing many more people like him. 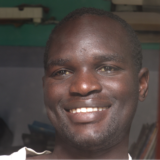 Dilman Dila is a writer, filmmaker, and all-round storyteller. He is the author of A Killing in the Sun, a collection of short speculative stories, and two novellas. Among many accolades, he was shortlisted for the Commonwealth Short Story Prize (2013), longlisted for the BBC Radio International Playwriting Competition (2014), nominated for Best Novella at the Nommo Awards (2017), and he received an Iowa Writer’s Fellowship in 2017. His films include the masterpiece, What Happened in Room 13 (2007), which has attracted over seven million online views, The Felistas Fable (2013), nominated for Best First Feature by a Director at the Africa Movie Academy Awards (2014) and winner of four major awards at the Uganda Film Festival (2014), and Her Broken Shadow (2017), a sci-fi set in futuristic Africa, which has screened in places like Durban International Film Festival and AFI Silver Theater.