That morning, there was a white rose on my windowsill, and my heart cracked.

I took it inside. I knew well the only things that mattered were that it was a rose and it was white, but I examined it anyway. It had been in full flower recently, but was quickly withering. Several petals were gone; another came off in my hand. The petals wore traces of dirt that browned them, and I wondered if that had been purposeful. A missive of death: white for the bone, earth for the grave. I was probably thinking overmuch.

I plucked the petals into a bowl and washed them, then put them to boil to make a sweet tea. As far as we knew, the armsmen didn’t know our resistance codes, but I didn’t like to leave evidence.

How? I wondered, and chastised myself for wondering. There couldn’t be another message until tomorrow; our communication process came in slow trickles, frustrating but necessary, according to the resistance leaders. I wondered anyway. Throughout the day, as I patched uniforms for the occupying armsmen, and baked bread to bring my neighbor with the broken leg, and scrubbed every floorboard in the house, I wondered: how?

How had my brother died?

The tea was too sweet. I brought it to my neighbor along with the bread.

I woke before dawn when the night was only just not-quite-black.

In my dream, I’d been sobbing—great full-wracked, wrenching sobs torn out of my chest, burning in my throat. My face had been wet with tears; so were my eyes, my hands. I shook with tears like a tree bending in a storm.

When I woke up, my eyes were dry, and I couldn’t be surprised. Some people say a body only has so many tears. If that was true, mine had been spent as a colicky baby. I’d never as much as wept since learning to walk.

It was too early to check the windowsill, but I did anyway, barefooted and in my night’s wear. There lay a scrap of red silk. So, he’d died on the battlefield.

I sewed it into the lining of my heavy winter greatcoat, to cover the tear that had opened in the seam of the breast pocket, near my heart.

I work quickly; by the time I finished, it still wasn’t dawn.

The next morning, a needle. He’d been injured first then, taken to a battlefield hospital, put in the charge of some fumble-fingered butcher, no doubt. I’d sewn his stitches myself when we were children, the time he broke open his knee, the time when he gashed his hand, the time when—well, many times.

The needle was sharp enough to draw blood from my thumb. I put it with my others, shut the box, and shook it. When I opened the box again, I couldn’t spot it anymore; it was just another jab of pointed metal.

There was the pit of a fruit, gnawed, and my heart iced.

They say a witch’s heart is the same texture as the stone in a peach.

So, the enemy had taken him as one of their own. Unless they used him as grist for their own side of the battlefield, he would be coming home to join the other barrow-wights that had once been our defenders, those who now occupied the city, harassing children and old men on the streets.

They say the dead come to roost like homing pigeons. He’d try to make the house his barracks if I couldn’t turn him out.

There was no message the next morning which was its own message. Wait.

A revenant armsman came to pick up the mended uniforms, and to leave another heap. If it galled—and it did—to sew for the enemy, at least it was not the worst recourse to which women could be forced in wartime.

I looked at the witch’s marks that ringed the revenant’s neck like brands, and at the gold of his eyes which they say are riches brought back from the land of the dead, and at the nervous smile he gave when he saw me looking too hard.

“Trouble with food?” he asked.

Before I could answer, he’d unslung his bag. Among his provisions, I saw bloodied ribbons of the kind that tie children’s hair. Light glinted on brass knuckles spiked with a ground mixture of glass and teeth. He gave me a rations cube and a stick of toffee.

I tried to protest. He held up his hand. His nervous smile stretched.

“Take care, okay?” His hands fretted, uncomfortably, at his pockets. “Next week.”

I gave the bar and toffee to my neighbor. Her leg had turned black.

My brother came at dawn, precisely, as if driven by a clock. His movements were strange; sometimes, he would be still like a rabbit listening to the wind, and then become suddenly, bonelessly rapid like a centipede. His eyes were gold; the marks on his neck were newly bright like fire.

He couldn’t talk yet. It would take time, I’d heard, for him to grow a new tongue.

He gave me his coat which I had sewn for him before he left. He gave me what remained of his shirt, hardly more than blood and buttons. He gave me the bag I’d sewn for his keepsakes; it was empty. He tried to hug me.

I eyed the pots on the stove, the poker by the hearth—but there hadn’t been a message that morning so as far as I knew my instructions remained: Wait.

I slipped out of the hug, but I let him in, and I shared the day’s bread between him and our neighbor both.

I did not watch him eat.

My brother took up the unmended uniforms and tried to help. I had to shoo him off. He’d never been good with a needle, but he’d never been this bad. I had to take all the stitches out and start over.

He looked so sad while he watched me do it. I felt bad, and gave him the hug I hadn’t the day before.

There were tears on his face that wetted mine. It felt so human.

They say the dead see the world as if it’s a nightmare.  Everything they knew is remade as an incomprehensible, unpredictable assault on their senses: too loud, too bright. A dog rolling on the grass is no different from a subterranean monster writhing out of the earth. Love and shock and pain are one merged, hungry thing.

In my brother’s nightmares, it seems, he can cry.

No message, but my brother was gone when I woke, out patrolling with the other armsmen. He returned with the light. He smelled of rank, fresh blood, and his hands were crimson. On his belt, there hung a child’s fingerbone.

He tried to hug me and was so confused when I pushed him away.

There lay, at last, the red rose on the windowsill, young and delicately colored, petals still tender.

What surprised me was the second rose that lay beside it, a red bud still clinging closed.

They smelled like sweet earth, and they were soft against my cheek. I wondered if their beauty was meant as a gift of apology for what the resistance required me to do. I was probably thinking overmuch.

I stripped the petals for tea.

My brother came home from his rounds with a second armsman, the one who came once a week to pick up and drop off uniforms. I looked at the puffy, scarred witch’s brands around the second armsman’s neck, and wondered how long he’d been in this nightmare of the dead. A long time, perhaps, considering how many words he could join together.

He had one hand around my brother’s shoulder. “Take care,” he said, nervously smiling.

It couldn’t be a coincidence, I thought. One young, red rose for this young man. Another still budded for my nascent brother.

A sweet smell wafted from the tea brewing in the kitchen.

These were things I knew:

That we could not win our city back if every time one of our defenders died, it only strengthened the invaders.

That other cities had fallen and died because no one wanted to hurt their fathers, husbands, brothers, sons, even their remains.

That once I had the dead men sitting in my kitchen, waiting for tea of roses, a pair of blows from the poker would crack their brittle bodies like dried leaves.

That I wouldn’t cry when it was done because I never cried.

That I had to let my brother hug me one more time first, even if it left bloody handprints on my back.

That I had a duty to the living.

I brought my neighbor the provisions from both men’s packs once I had sorted out the gruesome parts, using a clean sack so she wouldn’t have to know where they were from. Her leg had died; the sawbones was set to cut it off. Her husband was somewhere in the city, I knew, watching his nightmares through golden eyes.

When she saw the handprints on my back, she didn’t say anything.

I went home to pack.

On the windowsill, I left one of my brother’s buttons: it’s done.

A young woman came from the resistance at midnight to take me to a safe house. She found me in the kitchen, standing by the stove, wearing my winter greatcoat.

The poker lay where it had fallen. She looked over the twice-dead men with a neutral expression, and then nodded. “Do you have your things?”

When she led me out, I was crying.

Maybe the dead are right; this world is a nightmare. 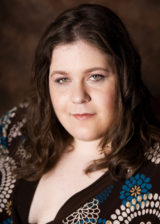