Weird Plagues: How Fear of Disease Mutated into a Subgenre

I don’t have to tell you that this is strange.

Living in the time of COVID-19, the many small and large changes leave us feeling shifted askew. Sometimes weeks feel like months, and sometimes months feel like days. People wear life-saving masks around their necks. Since Mary Shelley’s The Last Man, science fiction has tried to explore how outbreaks affect us by breaking our norms. But realistic plague fiction does not suffice to map our psyches. Fiction keeps inventing stranger diseases, ones whose strangeness inside stories matches the intensity of the estrangement we feel.

“Weird Plagues” have become one of my favorite sub-genres. The relatively recent surge of them—even in mainstream works like Chuck Wendig’s Wayfarers and Joe Hill’s The Fireman—are so new that they aren’t often discussed as a proper sub-genre.

Weird Plagues are distinctly post-zombies. Zombie Fiction won’t stay dead; it’s popular and there will always be another breakout game or movie. But popularity means zombies are no longer strange. Whether fungal or viral, you know about the dead rising and the biting and the ceaseless hordes. Even humans “becoming the real monsters” in the face of horror is now old and expected.

So we look to pandemics of the impossible. In Tony Burgess’s Pontypool Changes Everything, language is the disease vector, such that phrases get “stuck” in your head and dissolve your consciousness until you’re driven to harvest other people’s mouths. In Junji Ito’s Uzumaki, people are infected by the idea of spirals, fascinating them until their very bodies curve and warp into swirls of flesh. In Naomi Alderman’s The Power, women experience bodily growths that can electrocute anyone with a touch (frustratingly, the text doesn’t clarify about trans people).

The common phenotype of a Weird Plague story follows how we react to these health events. Like classic Plague Fiction and Zombie Fiction, the focus is both on how life changes for individuals and how society changes. Since each Weird Plague is unique, we don’t know how life is going to change. Tropes can’t prepare us. It yields delicious suspense.

Take Chuck Wendig’s blockbuster novel The Wanderers. Nessie and Shana are close sisters. Nessie is infected with a condition that abruptly sends her wordlessly marching in a direction—the same direction as everyone infected. We don’t know where they’re headed or what will happen when they get there. As Shana desperately follows her sister to protect her, we discover that if you impede a wanderer too much, they can explode.

This is the fun of the diagnostic period in a Weird Plague. Just like Shana, we’re fearfully trying to figure out what the symptoms and nature of the plague are. Each new symptom adds wrinkles to the plot, about how careful both the infected and non-infected have to be. We can’t rely on the next phase to everyone becoming mindless flesh-eating zombies. In Weird Plagues, there are more and unknown options for how a condition spread.

What if you’ll be infected by hearing something?

What if your body warps into an increasingly alien shape?

What if this time you remain you? That’s the biggest question of Weird Plagues, because if you’re infected, you don’t necessarily stop being a person. Contracting an insomnia disease in H.G. Bells’ Sleepover exhausts you and saps your energy over the days. But a country of insomniacs are still people, just as chronically ill people are in real life. My neuromuscular syndrome makes me seem strange to some people. I remain human.

In fiction, the infected being humanized feels unusual. Traditional plague fiction reduces the ill to an inventory of tragedies; your dad dies to the Super Flu, leaving you a crying and sympathetic protagonist with an immunity. Zombie Fiction dehumanizes the ill until they are so othered that you count a high score of how many you’ve killed. In the world of Weird Plagues, your condition doesn’t necessarily mean the end of you.

Weird Plagues get to play with the agency and marginalizations of the chronically ill. As the diagnostic period of the novel wanes and both characters and readers understand more of it, we adapt to how to live with the new uncanny reality. Take Joe Hill’s The Fireman, about a plague of spontaneous combustion. The public thinks everyone who gets it could explode into flame at any time, ignoring that emotions and agitation can be connected to it. The infected form colonies, trying to avoid vigilantes and law enforcement, to care for each other. The longer they live together, the more you see how the public is driven to ableism by fear and misunderstanding. These people don’t have to burn. They can care for each other.

When I discuss The Fireman with fellow disabled folks, they draw different parallels. In my reading, I thought of how police officers frequently mistreat the mentally ill, shooting them as a so-called precaution. My editor on this piece pointed out how leper colonies form and are sometimes harassed by the ignorant. A few gay friends thought of the vile mistreatment of HIV/AIDS patients. In all these cases, we feel it’s about time that fiction let us be people.

I still have a soft spot for spectacularly creepy Weird Plagues. In Craig DiLouie’s Suffer the Children, a Weird Plague hits the world’s children. Abruptly they can only survive on blood—but they’re still dorky, whiny kids. That is, so long as you feed them. If they don’t get blood regularly, they slip away into a permanent coma, and nobody produces enough blood on their own. It’s the parents who become monsters, because they’ll do anything to save their kids. More than any other apocalyptic scenario, this turning of caregiving and parenting into destructive acts feels like what could actually end society.

That’s the last great twist of the Weird Plague: even in Suffer the Children this isn’t necessarily the end of the world. Just as the diagnostic phase is about learning the scope and symptoms of the plague, the endings of these stories are about how our world changes. We could succumb to the tribalism and paranoia that has rendered so many zombie stories’ endings rote. But as in Sleepover, we might instead band together and adapt our norms. Can a treatment or cure be found? Can we collaborate and support each other through the unthinkable changes? Each Weird Plague story has its own answer to these questions. As a subgenre, Weird Plagues haven’t yet succumbed to being merely optimistic or pessimistic stories in their endings. They remain probability spaces, in which you can hope. No community ever survived the hardship of a pandemic without that hope.

You just hope people will keep their masks on in Area X. 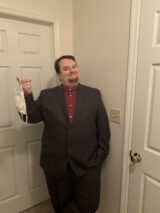 John (@Wiswell) is a queer author who lives where New York keeps all of its trees. His fiction has appeared in Uncanny Magazine. Tor.com, Diabolical Plots, Nature Futures, and The Magazine of Fantasy & Science Fiction, among other venues. He previously won the Nebula Award for Best Short Story for “Open House on Haunted Hill.”