After the legend of 牛郎织女

It begins, perhaps unavoidably, with my mother’s anger.

She caught me at happiness, you see. Unsanctioned.

a forest until you have emerged from the trees.)

I met a boy. My mother told him, as she stripped him from the sky,

You want to crawl on the earth like a worm, then become one.

(To me she said, See, squandered his potential. Because I was hers

I was granted a reprieve: the chance to pay my debt.)

The boy, unlike my mother, had been happy to take only

what I was willing to give. Now I watch him rebirthed—

(His new parents are human. Hard as deities, as whetstones.

They sharpen him into excellence and take credit for the bleeding.)

A man now, he yokes himself to an ox. Together they feed the earth.

One day the ox says to him, Go, take a wife for yourself.

(I wanted to be there; I wanted him. He took my clothes and

I followed at his heel. I chose to be there.)

Then we are married and we are happy. Humans everywhere

have stories about husbands stealing the skins of wives.

(I am happy; I love him; my mother despises the sum of it.

Snatching me back to heaven she says, I had to save you.)

I weave the clouds pink with blood and watch him weep.

Now the ox says, I will give you my own skin as passage.

(My mother raises her hand—strikes something else instead. Now

there is a gash across existence, a milky soup with stars for bones.)

beneath my feet. A hand outstretched towards someone I remember.

(Editors’ Note: “Weaver Girl Dream” is read by Erika Ensign on the Uncanny Magazine Podcast, 44B.) 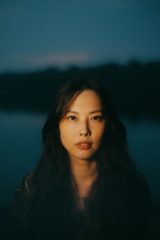 Lisabelle Tay is the author of Pilgrim (The Emma Press, 2021). Her poetry and short fiction appear in Strange Horizons, Fantasy Magazine, Augur Magazine, and elsewhere. She lives in Singapore.