We Are Not Daredevil. Except When We Are Daredevil

I’m at a local science fiction convention, riding in an elevator with this little boy of about six and his mother. I am dressed sharp because I’ve been making public appearances all day. I’m wearing my big dark wrap around glasses because the burning summer sun shining in through the big windows all over the hotel convention space is dazzling my diseased eyes. I’m wielding my white cane because without it, well, things get interesting. Mostly for innocent bystanders who have no idea I can’t see them, or at least see them clearly.

The boy scrutinizes me despite his mother’s whispered admonishments. “Timmy, stop it! Don’t stare. Stop it.”

I look straight ahead, trying not to laugh because it’s the loudest whisper ever and we are in an elevator. Finally, to his mother’s horror, the boy tugs at my sleeve. “Mister?”

I look down at him. “Yeah?” I can guess what is coming next. While it has never happened to me before, I know other blind SF fans and professionals, regardless of gender, have been asked some variant of this question.

I have to tell you, I have a deep and abiding love of Daredevil. As a kid forced to deal with the knowledge that I was slowly, steadily becoming blind and then given no follow up care or counseling after the diagnosis, Daredevil was my hero, my sanctuary, and my hope.

As an adult, I find him problematic. As a reader and consumer of SF, I’m faced with the fact that Daredevil doesn’t live the life of a blind person, that he doesn’t reflect the experience of any blind person I know.

But I’m also faced with that fact that most SF cannot claim to have done any better. I’ve encountered too much science fiction and fantasy where the blind character is an object to be cured by science, magic, or by being turned into a vampire. Too many disabled characters play The Wise Mentor. Gruff on the outside, they have a golden heart within and will guide The Hero on his journey until killed by The Villain to show just how villainous the villain is (insert mustache twirling, puppy-kicking, and random tying of women to railroad tracks here).  Too often, a blind character doesn’t live in their blindness. They fight crime and drive cars and do all the things sighted people can because they have special powers, supernatural abilities, or science fiction tech. They see into the future or are depicted as sporting sharpened senses because of their blindness.

I live in this world. I can’t toss my white cane aside when I need to spring into action: the cane goes with me everywhere. I travel around my city on public transportation. My other senses are not supernaturally sharper because I am blind. I simply pay better attention to those other senses. It’s a learned skill. I live within my blindness every day, and I want to read about fictional characters who also live with and within their blindness.

When I began writing fiction and plays for publication and production, I made a mindful decision to write the characters I wanted to read. I decided I would be “that blind author and playwright from Minnesota,” would wear that mantle proudly, and my blindness would inform my fiction.

This is my job now, to write stories where the disabled’s presence in the narrative is not driven by other characters’ (or the author’s) need to fix them. Disability is part of who they are, as opposed to being their identifying characteristic. It is important to me to show the audience the joy, pathos, and everything in-between that makes any character, disabled or not, endearingly, heart-rendingly human.

I try to write the characters I want to read. The kind I wanted to be when I was a kid. The kind I still need as an adult.

I might find Daredevil problematic these days, might roll my eyes at his “radar sense” allowing him to see the world and toss his mobility cane aside at will despite his blindness, but when a child tugs on my sleeve and asks, “Mister, are you Daredevil?” what can a blind author do? I don’t know this child’s story. I don’t know what secrets and demons he might be carrying all alone, even at his age. All I know is, in this moment I have a choice, and I remember how much I needed heroes to believe in as a child. How much I still need heroes to believe in as an adult.

I look down and put a finger over my mouth and his face lights up in pure joy as I say in a low whisper, “Shh. You can’t tell anyone, promise?”

He nods agreement, eyes wide. The elevator doors open and he and his mother exit. I will probably never see him again, but…

Hell yeah, kid. I am Daredevil. 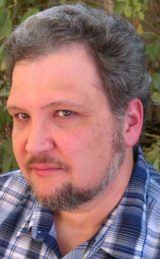 Michael Merriam is an author, actor, poet, playwright, and professional storyteller. He has published three novels, two short story collections, four novellas, and over 90 pieces of short fiction and poetry. His debut novel, Last Car to Annwn Station, was named a Top Book in 2011 by Readings in Lesbian & Bisexual Women’s Fiction. His scripts have been produced for stage and radio, and he has appeared on stage in the Minnesota Fringe Festival, Tellebration!, StoryFest Minnesota, and over the air on KFAI and Minnesota Public Radio. Michael is a founding member of the Minnesota Speculative Fiction Writers and a member of the Artists with Disabilities Alliance, the Steampunk Artists and Writers Guild, and Story Arts Minnesota. Visit his homepage at michaelmerriam.com.