When Julian Bashir is asked to help a group of genetically engineered “mutants” on the space station Deep Space Nine, he faces an interesting dilemma. Illegally genetically engineered as a child himself, his status as a “mutant” has recently been revealed, and he now has to deal with the fallout as his friends and co-workers see him in a different light. But in working with Jack, Patrick, Lauren, and Sarina, he realizes that he can take pride in his genetically engineered identity, and perhaps most frighteningly, that he can relate to these outcasts in some ways better than he can relate to the typical Starfleet officers he’s surrounded by in his everyday life.

I wasn’t genetically engineered as a child, but I was born with cerebral palsy, and like Julian’s exploration of his genetic identity, I have had to navigate what my disability meant throughout my life. I grew up trying to be as “normal” as possible. I went to public school and all of my friends were nondisabled. I felt that despite my disability, I was “smart,” and I took much pride in my academic achievements. That all changed when, through a series of coincidences, I began going to a summer camp for children and teens with physical disabilities when I was thirteen.

Julian’s first reaction to his fellow genetically engineered comrades is similar to my first reactions to people who were more physically and intellectually impaired than I was. “All I kept thinking was ‘There but for the grace of God go I’,” he says to his friends. He considers himself lucky that his genetic enhancements didn’t result in cognitive impairments like Jack and the others. I felt lucky that I could walk and talk, and that I didn’t have any intellectual disabilities. Like Julian, I felt pity for those I saw as less fortunate than myself—until I got to know some of those “less fortunate people.”

Later in the episode, we see Julian becoming more and more comfortable with this group of misfits and isolating his typical friends in the process. Miles O’Brien, Julian’s best friend, feels left out among this odd new camaraderie. “When we actually got down to working, it was incredible. We were all on the same wavelength, talking in shorthand, finishing each other’s sentences—I’ve never had that with anyone else.” Julian explains excitedly to an increasingly uncomfortable Miles. It’s a revelation, the same revelation I had when I first came to camp. It was the first time I’d been around so many other people with disabilities. No one during the school year could relate to the way my aide would never leave me alone, or the stares and comments I got every time I went out in public with a mobility aid. A light had come into my world, a light I didn’t even know I was missing.

Unlike Julian, whose foray into this brave new world lasts barely an episode (two, if you count the follow up episode featuring the Jack Pack several seasons later), I dove eagerly down the rabbit hole and didn’t surface for many years. I eschewed able people as people who would never understand me, and each school year was just another painful interlude between summers at camp. Disabled people were my family and camp was my home. I even begged my parents at one point to let me transfer to the segregated school for kids with disabilities near my home (they said no, believing that public school was the best place for me to get an academic education). Even after I graduated high school and started college, I instinctively sought out those on campus who were also disabled in some way. It wasn’t until after college that I started to let down my guard and realized that while abled people may not understand firsthand what I go through, they “get it” more than I think.

Now that I moved to the DC Metro area, I feel like I’m starting the process all over again. Only this time, I have the wisdom to learn from my past. Since I can’t take my cues from Julian Bashir and go to Starfleet Academy, I’ll have to be happy with what I have. 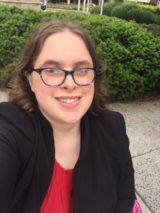 Cara Liebowitz is a multiply disabled writer and activist currently living in the Washington, DC metropolitan area. By day she handles fundraising, grant writing, and partnerships for a national disability rights nonprofit. By night, she reads and writes both nonfiction and fiction, watches Star Trek, and has long conversations with her cat. She remains convinced that she is a mermaid, as her legs don’t work well on land.