The Words on My Skin

The traits that make me who I am are written on my skin. My biggest words are in my mother’s handwriting—smart, loving, resilient, organized. She wrote them on my back because there’s no way I’ll ever be able to reach that skin myself. Mother’s largest word is considerate, written in her father’s blocky letters, filling the entire length of her right arm.

The first word I chose for myself was fun. I was six at the time, and I didn’t know how to spell a lot of words. Mother was appalled when she saw it, sprawled across my left forearm in uneven capital letters. I’d stolen her fountain pen to do it, and there were laws against skinwriting without a license. She could have had her pen revoked for what I’d done, but she wasn’t mad. Anger wasn’t written anywhere on Mother’s body, and she was covered in words like patient and forgiving.

In theory, it was a good system, having only a handful of families responsible for all the pens. Skinwriters filled out piles of paperwork and endured random inspections. There were supposed to be harsh penalties for those who disobeyed the rules. In practice, no one looked at the paperwork, and the inspectors were more interested in bribes than rules. By the time I was ten, I was sneaking words onto my skin a couple times a month—clever, stealthy, independent—and I never once got caught.

One night when I was fourteen, I stayed up late and wrote words on my inner thigh—passionate, sensitive, flirty. Mother hadn’t put a word on me for years, but when she found out she added three new adjectives to my back—responsible, practical, prudent. Irritated that she would treat me like a child, I retaliated by filling my entire left shin with words. Artistic and sassy. Ambitious, playful, outgoing, strong. Mother pretended not to notice. She didn’t want to escalate the conflict, or maybe she approved of my new choices.

I moved out when I was eighteen, and I wrote myself confident and sexy. I started dating an older man, and I fancied myself in love with him. He didn’t come from a family of skinwriters and words were expensive, so he only had three—brave, athletic, and charming. Everything was going well until I discovered he was cheating. I did an unthinkable thing. I wrote on him while he was sleeping, on the back of his neck, near his hairline so he would never see the words—loyal, faithful, honest, loving. He left the next morning and never came back. I hadn’t specified who he should be loyal to. It clearly wasn’t me.

I fell into a string of short–term relationships. By then I’d overwhelmed responsible and prudent with a dozen variations on adventurous and wild. I verged on reckless, even though I’d never written that word onto my skin. I was unbalanced and out of control. Much to my dismay, I was also pregnant.

Mother and I hadn’t spoken in months, but I went to her anyway. I worried that she would write on me, try to change me into something else, but she didn’t. She listened to my anxious rants and waited for me to write what I needed onto myself—maternal, reliable, wise.

I was running out of space on my skin, and the words were getting smaller. My attributes were becoming increasingly fixed, less changeable. There simply wasn’t room for much more. I chose my words more carefully now, and regretted the impulsive choices of my youth. I yelled at my mother for letting me ruin myself, then broke down in tears and apologized. Part of that had to be the hormones—pregnancy was pretty bad that way.

The skin on my stomach stretched as my baby grew, and I filled the extra space with the words I needed to get through the delivery. Stoic, powerful, tenacious, calm. I brought a healthy baby boy into the world, his skin a blank canvas, pristine and pure and free of the weight of other people’s expectations.

Mother handed me a fountain pen. I held it poised above my baby’s empty back. Mother and I had talked about the choices, the best qualities to give a child. I knew which words I was supposed to write, but I couldn’t bring myself to do it. I broke the nib off the pen, and I threw it all away. I loved my son exactly as he was.

He could choose for himself who he wanted to be. 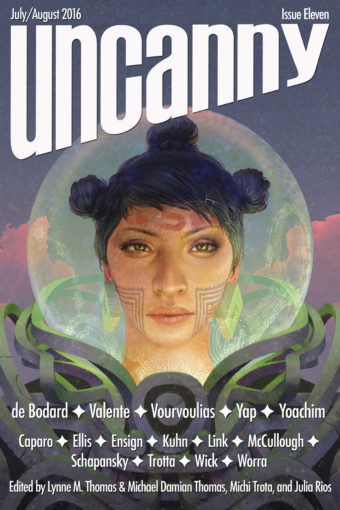