The Horror and the Reality: Mental Illness Through the Lens of Horror

When I was a kid, my family took me to Halloween Horror Nights at Universal Studios. I don’t remember the event very well, but they tell me I took it upon myself to try and scare the people trying to scare me. The one thing that did stay with me was refusing to go into the one attraction that was set up like a mental institution. I wasn’t easy to scare, but under no circumstances would I get anywhere near that one.

It was the same story with horror movies. I grew up watching all kinds of horror: slasher films with cousins, more psychological films with my mom. They were a fun kind of frightening, and I loved the thrill of it. As I got older, I started watching them with friends late at night, making fun of the cheesy ones and jumping at every sound when we stumbled across one that actually scared us. I loved a lot of what we watched, but I got uncomfortable whenever institutions came up, or they started talking about a villain as explicitly having a mental illness. Silence of the Lambs was a particularly troubling example. It made my skin crawl and got my hackles raised even though I didn’t really understand why.

Then I turned sixteen, got my first diagnosis of Bipolar II, tried to commit suicide, and ended up in a crisis unit for the first time. I look back on those early reactions and I laugh; it’s almost like I knew what was coming.

There was no lightning strike moment of realization that my fear was misplaced, but as I continued watching horror, my opinion slowly started to change. Instead of uncomfortable, I started to get annoyed, even angry, at the patterns I saw. The people who were obviously mentally ill, the people who were like me, were never the heroes. If I was lucky, they’d be the victims, but never the last one standing, or even the one who took the bad guy with them in the climactic showdown. More often they were the bad guys: the villains, the tormentors, the people who were supposed to scare me. But it’s hard to be afraid of them when I understand them better than the heroes.

Just about everyone I know is some kind of mentally ill. I know people struggling with OCD or depression, a few who are on the schizophrenic spectrum. I myself deal with occasional hallucinations and delusions, violent thoughts, and other symptoms that would get me cast in the role of the antagonist in any horror movie. None of it has sent me on a killing spree.

Instead, I survive. I survive the images that go through my brain; the terror of being sure there is something outside my window or watching me from behind a cracked door, or that I’ll fall into the floor and be trapped there forever. I survive, and I keep going, and there is still no one like me in the horror I see. I survive every day I manage to get out of bed, but somehow, people like me aren’t allowed to be heroes.

I want horror where a person can be mentally ill, and still be the one who rises up, takes on the monsters, and brings them down. I want to see us fight and win in horror movies the same way we have to in life. 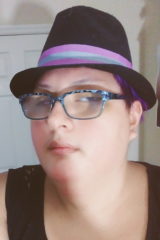 V. Medina is queer, nonbinary, blind, and usually trying to write three things at once. They live outside of Tampa with their partner, two ridiculous cats, and a never-ending supply of fizzy drinks and coffee. Find them on Twitter at @howsweettheword.