Our Talons Can Crush Galaxies

This is not the story of how he killed me, thank fuck.

You want that kind of horseshit, you don’t have to look far; half of modern human media revolves around it, lovingly detailed descriptions of sobbing women violated, victimized, left for the loam to cradle. Rippers, rapists, stalkers, serial killers. Real or imagined, their names get printed ten feet high on movie marquees and subway ads, the dead convenient narrative rungs for villains to climb. Heroes get names; killers get names; victims get close–ups of their opened ribcages mid–autopsy, the bloodied stumps where their wings once attached, baffled coroners making baffled phone calls to even more baffled curators at local museums. They get dissected, they get discussed, but they don’t get names or stories the audience remembers.

So, no. You don’t get a description of how he surprised me, where he did it, who may have fucked him up when he was a boy to lead to such horrors (no–one), or the increasingly unhinged behavior the cops had previously filed away as the mostly harmless eccentricities of a nice young man from a good family. No fighting in the woods, no blood under the fingernails, no rivers or locked trunks or calling cards in the throat. It was dark and it was bad and I called for my sisters in a language dead when the lion–brides of Babylon still padded outside the city gates. There. That’s all you get, and that’s me being generous. You’re fuckin’ welcome.

However, here is what I will tell you. I’ll be quick.

Anyway. Like I said way back at the start, this is not the story of how he killed me. It’s the story of how a freak tornado wrecked a single solitary home and disappeared a promising young man from a good family, leaving a mystery for the locals to scratch their heads over for the next twenty years. It’s the story of how a Jane Doe showed up in the nearby morgue with what looked like wing stubs sticking out of her back, never to be claimed or named. It’s the story of how my sisters and I acquired a 1967 Mercury Cougar we still go cruising in occasionally when we’re on the mortal side of the pike.

You may not remember my name, seeing as how I don’t have one you could pronounce or comprehend. The important thing is always the stories—which ones get told, which ones get co–opted, which ones get left in a ditch, overlooked and neglected. This is my story, not his. It belongs to me and is mine alone. I will sing it from the last withered tree on the last star–blasted planet when entropy has wound down all the worlds and all the wheres, and nothing is left but faded candy wrappers. My sisters and I will sing it—all at once, all together, a sound like a righteous scream from all the forgotten, talked–over throats in Eternity’s halls—and it will be the last story in all of Creation before the lights finally blink out and the shutters go bang.

(Editors’ Note: “Our Talons Can Crush Galaxies” is read by Erika Ensign and Brooke Bolander is interviewed by Deborah Stanish on the Uncanny Magazine Podcast Episode 13A.) 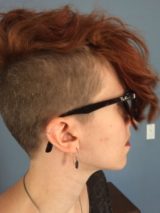 Brooke Bolander writes weird things of indeterminate genre, most of them leaning rather heavily towards fantasy or general all-around weirdness. She attended the University of Leicester studying History and Archaeology and is an alum of the 2011 Clarion Writers’ Workshop at UCSD. Her stories have been featured in Lightspeed, Tor.com, Strange Horizons, Uncanny, and various other fine purveyors of the fantastic. She has been a repeat finalist for the Nebula, Hugo, Locus, and Theodore Sturgeon awards, much to her unending bafflement. Follow her at brookebolander.com or on Twitter at @BBolander.