by Keith A. Manuel in Uncanny Magazine Issue Twenty-Four | 1120 Words

Late last year, my therapist told me I was bipolar. We had talked about my personal history, and I’d always had phases of depression and mania, though the former had lately been a deeper, more life-altering issue. Depression for me is melancholy, feeling I’m sinking deeper into a hole, and compounded guilt over missing deadlines and not being there for the people I love. But I knew that I would eventually shift into mania, where I would rush to get as much done as possible, which in turn only led to being irritable because things were not happening, and exhaustion because I operated on little sleep and attempted to keep it up with too much coffee and sugar. With medication, talk therapy, and lifestyle changes (for me, getting to sleep on a regular schedule and curbing caffeine intake) the condition is manageable, but bipolar remains an important part of who I am. It’s still there, but less intense, not going back and forth as violently.

There’s no medical test for bipolar. Diagnosis and treatment relies on the patient self-reporting their symptoms. In other words, stories. Talk therapy for me is all about the stories we tell about ourselves. So, let me tell you about the stories and characters that helped me through the three decades before I was diagnosed.

I was drawn to genre fiction during my quest to understand myself. Since I was young kid, I read a lot of fantasy fiction, starting with fairy tales and classical mythology. In middle school, I devoured the Narnia books, reading and rereading whichever volume was close at hand. Then I graduated to Tolkien before I was in high school. The Hobbit was shelved in the children’s section of the library, and once I’d read it three times, the librarian on duty let me into the adult fantasy section.

It took me a few tries to get into The Lord of the Rings. I was already too cynical a kid to hang around Bilbo’s birthday party for long. But there were enough twists, and a band of brothers who reminded me of my own circle of friends. I knew people like Merry and Pippin and Sam. I so wanted to be a Sam, always resolute and sure of what he wanted.

But the Fates had made me a Frodo.

Frodo resonated with me. He kept going. He survived. He carried the weight of the One Ring, even as it got ever heavier; he was always tempted to turn invisible and slip away when things got too intense. The Ring he carried came to symbolize not wanting to let go of those powerful emotions that I’d wrapped around myself. Deep in mania, the whole world seemed within my reach, that I could accomplish so much if only I could push myself a little harder. Like the Ring, my mania stretched me and left me hollow until, like the Ringwraiths who pursued Frodo and Sam, I became a shadow of myself. I began to search for answers because I was in too deep to resist its power alone.

But the most important lesson Frodo Baggins taught me is that even when it’s over, the scars remain. Rereading The Lord of the Rings this year, I remember what hooked me in as a teenager: the pain takes a long time to go away, even when surrounded by love, and like Frodo sometimes you just can’t go home again.

Frodo prepared me for other representations of mental health in genre fiction and related media. As I was first approaching treatment, a friend recommended Joss Whedon’s Firefly. I initially found a lot to like about the TV series. The character River Tam is presented with symptoms that reminded me of what I was going through. Her brother, Simon, a medical doctor, was focused on “fixing” her, and everyone around her treated her as irrational, including at times, herself. I felt I likewise had little control over my choices and shifted radically from frenetic activity to melancholy. Once I was diagnosed and learned more about bipolar, however, the more problematic her character arc became. Rarely throughout the series or the follow-up movie Serenity do we see the world from her perspective. This goes beyond the male gaze that pervades the series. She is a broken genius to be protected or a scary, sometimes violent, mad girl. Unlike Frodo, once her burden is lifted in Serenity, she is instantly better, with no scars to deal with.

The third character that helped illuminate my mental health struggle is The Sleeper, a recurring character in George R. R. Martin’s Wild Cards anthology series. Unlike many people affected by the mutating virus, The Sleeper has developed good and bad abilities, and his trait is sleeping for an extended period then waking up with a new set of abilities each time. I recognized in this character the unpredictability of my own condition. From one day to another, my mood and corresponding energy levels varied, sometimes rather unpredictably. Deep, dark depression might give way to a supercharged, agitated mania that would allow me to get everything done before I fell again into the darkness.

None of these characters are called bipolar in the material itself. Rather, seeking answers, I read my problems through the lenses of the stories that gripped me, filling in the gaps with my own feelings and experience. I sought out characters who represented my own struggles, to help me tell my story. Stories like these prepared me for talk therapy, because they gave me characters like Frodo who survived despite the odds.

Genre fiction needs more characters with bipolar who are not presented as scary, irrational, or possessing superhuman abilities because of their disability. The bipolar characters I’m writing struggle with their disability but aren’t limited by it. Bipolar characters must be given the same attention as any other character, with their own motivations, ambitions, and weaknesses. They can pilot starships, talk to dragons, travel between worlds, and fight for a future worth saving. 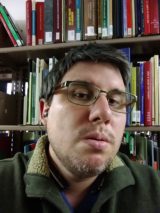 Keith A. Manuel is a SF writer, historian, and library worker. He lives and works in Florida with his wife, daughter, and three quirky house cats. You can find him on Twitter @KeithAManuel and on his writing and book review blog Borrowed Worlds.