Maybe the first thing I should say is that this story has a happy ending.

I was a sickly, nerdy kid whose financially-strapped single mom carried baggage of her own and could never quite cope. I was an obsessive lover of books, one of those prodigies who was reading at two and polishing off chapter books by kindergarten. In grammar school I worked my way through the library, gradually getting less picky as the options thinned. Finally I gave in and read a weirdly titled book that I thought was about getting old. Yeah, A Wrinkle in Time.

After that, I still read anything that was vaguely book shaped and had words in it, but what I wanted to read was science fiction. It was hard to find. I didn’t know what I was looking for. A sixth grade teacher lent me a copy of Watership Down, another transformative experience.

It was the last time any teacher would be kind to me.

My symptoms are odd, and no one really knows what my disability is, nor does it really matter at this point. I wake up with flu-like symptoms. That is, if I can get to sleep at all, with feeling like wasps are stinging me whenever I try to relax. But the most devastating aspect only kicked in at puberty. I don’t clot right.

I remember sitting there horrified in sixth grade, realizing I had to go to the front of the class and write my name on the chalkboard in order to go to the bathroom. I could already feel the puddle that had soaked through my pad and my jeans, oozing across the chair.

I don’t remember much of school after that.

Sometimes I think I’m not disabled. Then I see how my condition has warped my entire life, and I know I am.

I do remember the books. I grew weaker and more isolated, but I got a ride to the library once a week and checked out all the novels I could carry. I became allergic to everything. I couldn’t spend time outside in the summer. A sympathetic but ungeeky friend re-gifted a boxed set of The Lord of the Rings to me. When I ran out of library books, I’d read and reread those. I was always anemic and mortified over my constant accidents. For a week every month I was barely conscious, and didn’t dare get half an hour away from the bathroom.

If I’d had any family with resources, maybe I could have weathered this, but I didn’t. And I didn’t.

The library’s adult fiction section didn’t separate out science fiction and fantasy. It marked the spine with a little blue rocketship sticker. I scanned every shelf picking them out, though I wound up preferring the W-Z section. John Varley, Joan D. and Vernor Vinge. Gene Wolfe. Roger Zelazny.

When I was fifteen the high school asked my mother to withdraw me. She agreed, and my mother and I and the administrator were all relieved. I had managed excellent grades despite 85 percent absence, and the school couldn’t deal with what that did to their records, they explained. My already-overwhelmed mother had never tried to force me to attend. She could see how sick I was, and knew how much I actually wanted to be there. But truancy officials had started to get involved.

All the cranky old male doctors I saw never asked the questions that could have got me some measure of help, or at least understanding. They accused me of taking drugs.

Then my stable if less-than-ideal life was thrown into chaos when my mother was suddenly killed, leaving me an orphan at 17. The court emancipated me, but while I was an adult on paper, I still couldn’t function. One week every month, I was homebound and useless, and every week of every month I had no education, no experience, and no connections.

I’d wanted to be a physicist since I read about ions in the encyclopedia when I was six. I don’t think there is any more impossible career for a person who can’t go to school.

But you know where this is going.

I met a technical nonfiction writer, who gave me a copy of his how-to book, which explained how to make a living writing for magazines. At last, something I could do! I subscribed to Writer’s Digest. I contacted markets for guidelines. I set up a word processor.

I… wrote a fantasy novel instead, because of course I did. What else was going to come out of my brain?

My new husband and in-laws were very supportive of my choice to be a writer. My brilliant, highly-educated, world-traveling mother-in-law had never read any genre work. She thought I was amazingly creative instead of just regurgitating all the stuff I’d read.

It was a start.

After finishing that first novel, I made writer friends online. I went to conventions. I attended Viable Paradise (the only workshop that would let my husband come along. No way I could go anywhere without someone to look out for me).

I thought my life made sense at last. Here was a career path where all my reading would pay off. Where my lack of credentials and disability wouldn’t shut me out.

It’s been a long time. I’ve watched two “generations” of writer-friends succeed and move on without me, and a third is starting to fade into the distance. Turns out that being a professional writer is something like Olympic-levels of competitive, and you need to do a lot of training and be in top form to compete.

I couldn’t compete. One frustrated year I carefully tracked my days. I was productive maybe twenty hours a month. Doubts constantly whispered that only healthy, affluent, college-educated people with nice families ever succeeded as writers. Sometimes they still do.

But this is an essay on how science fiction saved me. I stuck at it. I mean, I didn’t have any other options, you know? I kept working to improve. I made new friends and new connections.

My background required me to be more creative in my stories. I don’t have any idea what it’s like to have a regular family, go to school, hold a job. So my YA fantasy novel (forthcoming in spring 2018 from REUTS Publications!) is about a world of magical islands, featuring teens who train to fight in light battles using mirrors, lenses, and prisms. I figure I am as much of an expert in that background as anyone. My adult SF novel (out on sub, wish me luck) is about a lost colony world, settled by three experimental utopias.

It turns out that in writing science fiction being unique can be a benefit, practice eventually works, and persistence is really what matters. Not that it will ever be easy. My small press publication after 25 years of trying is not likely to be lauded as a success by anyone. But without science fiction, I wouldn’t have had anything to aspire to, and I would never have produced something I could share with the world.

We are an amazingly open-minded industry, overall. We’re not perfect, but I don’t honestly know any place more welcoming of all different kinds of people, as previous projects in the “Destroy” series have helped demonstrate. But we can be as welcoming as possible, and that still doesn’t mean it’s fair. Professional writing preferentially rewards the privileged, whether that privilege be social, economic, or, as we are addressing here, physical health.

Try to remember that it’s not an even playing field for everyone. Remember that the people who aren’t just like you might have a new perspective you want to hear. 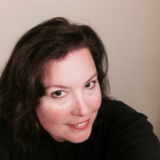 Laurel Amberdine was raised by cats in the suburbs of Chicago. She’s good at naps, begging for food, and turning ordinary objects into toys. She read a novel a day for over a decade, until she married someone who occasionally wanted to talk to her, putting an end to that streak.

She currently lives in San Francisco where she works as Assistant Editor at both Locus Magazine and Lightspeed Magazine. She is willing to entertain offers from other magazines that start with “L.”

She has published poetry and short fiction, but loves novels best of all. Her YA fantasy novel Luminator is forthcoming from Reuts Publishing.