Scenes from the Apocalypse

March 2020. Chicago is three days into lockdown and while my Facebook feed is busy baking bread, I’m testing software, researching business models, trying to figure out how to translate intimate circus cabaret shows and celebrations of geek culture into a livestream format that can give my cast (and myself) some income.

I’m the founder and director of Raks Geek, a small bellydance, circus, and fire performance company, and all of our work and plans for the future have just evaporated.

I worry about artists around me, many of whom live on the financial edge in the best of times.

Internally, I’m kicking and screaming—I love live performance and never wanted to be a Youtuber, and I wonder if the entire arts industry is going to collapse—but I’ve been keeping tabs on COVID-19 around the world and it’s clear we’re not going to be done with this in two weeks. My estimate, watching China’s robust pandemic response, is about three months before things start to go back to normal.

As we all know, this proves to be optimistic.

May 2020. Hate crimes and harassment against Asian Americans are on the rise. Most Americans think Chinese folks from China and Asian Americans in the diaspora are the same, and, encouraged by politicians, they blame us—all of us—for COVID. My social media feeds are full of stories of elders being beaten, women with acid thrown in their faces, racist insults, and shunning.

Meanwhile, much of the country cites the Model Minority Myth and is skeptical that we ever face racism at all, in spite of a history ranging from the Chinese Exclusion Act to anti-miscegenation laws. In spite of Iron Fist and Firefly and Doctor Strange.

Most of Raks Geek’s performers are Asian American. I myself am Chinese by way of Singapore, an immigrant and naturalized American who grew up a mile from Detroit.

The fifth livestream show I produce features an all-Asian cast from around the country (it turns out that the online format has certain advantages). We represent Hmong people who grew up in the Midwest, Korean adoptees, South Asians, and more, with firespinning, aerials, contortion, and fusion bellydance.

We donate proceeds for the entire show to Asian Americans Advancing Justice.

June 2020. Black Lives Matter protests have swept the country, and my white friends swear that this time it’s different, white people comprehend racism now to a level they never have before. Within the arts, there are calls for more diverse casts, more diverse material, more diverse leadership—more BIPOC, more LGBTQIA.

Raks Geek has been doing this work for years. Most of us are Asian, but most of our cast and crew are also LGBTQIA. One of the reasons we love science fiction and fantasy is that we can imagine different worlds. More equitable worlds. And through this genre, we can help others envision a reality where we’re judged for who we are, not what we look like or who we love.

For a month or two, other producers are more conscientious with their lineups. The momentum fades, as it as often does, and most organizations go back to business as usual.

Our business as usual is conscious representation. Justice. Equality. Care for each other. Some of our performers with day jobs quietly donate their pay to performers without. I slip some of our cast money for groceries, help fellow artists navigate PPP loans, grants, unemployment insurance, and mutual aid.

Making the art you want to see is a hard path—in a reality where historically underrepresented groups systemically get fewer resources and support, working twice as hard to do half as well is not just an adage. For WOC especially, it’s a fact.

But. We make it through with each other.

March-May 2021. Vaccines! Rehearsals are back. Small, in-person gigs are back. After a year of stoppages, getting in front of an audience is nerve-wrecking, exciting, and a relief. Slowly, we get back to doing the thing we were put on this earth to do.

Half the country immediately tries to pretend the last year never happened. The other half echoes Sam and Frodo returning, indelibly changed, to a Shire that is not the same.

While the pandemic shut everyone down at roughly the same time, returning comes in trickles.

Mentally, emotionally, we’re exhausted. Some of our colleagues have left art entirely. Major organizations, venues, pillars of local and national scenes, have permanently shut down. Many of those that did survive are on the brink and won’t be on secure footing for a long time. But it feels like hope exists again.

We get back to training, to doing the thing we’re called to do.

June 2021. A woman spits on me and calls me a chink while I walk down the street. In my neighborhood. In broad daylight.

A couple weeks before, a friend is nearly run over by a man in a truck yelling “f— Asians” —the man hops the curb and drives into their Saturday afternoon picnic. Everyone tries to dive out of the way, but one woman is pinned underneath the truck. Two people end up in the hospital.

The racists are getting bolder, no longer content to go after elders in the dark. They’re attacking younger, more Americanized Asians, less easy targets, in the middle of the day.

A white friend posts a joke on Facebook: What if Thanos had snapped his fingers and stopped Chinese people from eating bats and causing COVID?

I unfriend him, but he’s far from the only one making those jokes on the internet.

July 2021. Raks Geek does our first full-length theatre production in 16 months. Wow, does it feel good. We require proof of vaccination at the door, limit the audience to half capacity, under 60 people. We open windows and filter the air. We enforce stricter protocols than the city requires.

I book dates on the theatre calendar for the rest of the year even though I don’t know if we’ll get to do them. I doubt we’ll go under lockdown again, but even knowing our venue may not survive another shutdown, we’d rather voluntarily cancel shows rather than risk our health or that of our community.

It surprises people, but I plan to keep our livestream shows too. We’ve spent a year and a half building a community of nerds from all over the country, not just Chicago, and they’ve helped us survive. I think we’ve helped them survive too.

In spite of extreme fatigue and the trauma of the last year, we’re happier than we’ve been in months.

But it all feels fragile. 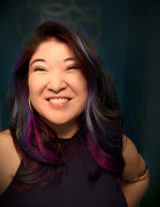 Dawn Xiana Moon is the Founder/Director of Raks Geek / Raks Inferno, a bellydance and fire company that’s been featured on MSN, UK Channel 4 TV, WGN-TV, and more. She herself was named “Best Stage Performer” (2020, 2019) and “Best Dancer” (2019) by the Chicago Reader. She appeared on Britain’s Got Talent last year.

Dawn is also a musician who’s performed in 10 states and released 2 albums; her music is a blend of folk/pop with influences from jazz and traditional Chinese music. She was named runner up for “Best Singer-Songwriter” and “Best International/World Music Act” by the Chicago Reader.

When she’s not making art, you can find her leading UX design for projects with the CDC and Medicaid or writing essays and cultural commentary on film, TV, and music.