Quest for an SF/F Grandmother

I remember looking at my bookshelves and thinking “Bloody hell, where are all the women?” I was a teenager, and these particular bookshelves held only science fiction. I took all the books off the shelves and made two piles. One was rather large, with enough novels to construct a small, but stable, book fort; the other pile had maybe half a dozen books by Ursula Le Guin, a few by Octavia Butler, and one by Kate Wilhelm, Where Late The Sweet Birds Sang.

After that, I changed my reading habits and reasoned since I’d spent most of my teenage years accidently reading almost entirely male authors, it was quite reasonable to now deliberately split my reading in favour of women. But something else gnawed at me too, something I didn’t quite have the words to express then, but I think I understand now: I wanted a grandmother in science fiction.

History is made up of what we can remember, and we so often forget the women. Science fiction is no different. When I think back to the eighties and nineties, I can still come up with plenty of female science fiction writers, but I’m painfully aware the number pales in comparison to the number of men I could name.

Step back, just a little further, and it gets awkward. I know plenty of women SF writers from World War I through to the seventies, but I only know them because I very deliberately went to find out their names and read their work, so if I was ever in the position of having to listen to someone say “Oh, but women never wrote SF in the nineteen–whatevers” then I could say “Well actually—” while trying very hard not to sound too pleased with myself. It’s possible, offhand, I could name more women than men, but I know I had to look for the women. I was on a quest for their names, hidden within the folds of history, whereas I was handed the men’s names as a matter of course wherever I went looking for my beloved spaceships.

More than names, however, I wanted to feel a stronger sense of connection. I’ve never been very interested in my family tree, it’s farmers and coal–miners all the way down, but I’m fascinated by the history of science fiction, which writers influenced who, the shadow one generation casts on the next, the revolts and the re–evaluations, and what endures and what is forgotten. And as I looked at my piles of books, I saw such a lot of exciting, wonderful stuff, but I didn’t see me. The science fiction I read was overwhelmingly by white American men, and while expanding one’s points of reference is a marvellous thing, I wanted to feel a more substantive link to the past than the shared love of a genre. And so I began a quest to find my grandmother. My criteria were simple, but firm: I was looking for a Scottish woman, no more than a decade younger than my actual grandmother (born in 1935) but older was fine, who’d written about spaceships.

Do any names instantly spring to mind? If you answered yes, I adore you.

I knew I had only American women on my SF shelves, so I turned to my faithful lists of Hugo and Nebula nominees, and scoured them for women, and I worked my way through at least one work by all who’d been nominated in the novel category. I discovered new and brilliant writers, but most were much too young, and none of them were Scottish, indeed, I considered it a small victory whenever I stepped outside North America. I moved on to the shorter fiction categories. Ideally, I wanted a novelist—that was the form of fiction I most loved—but I was hardly going to turn away from a writer of shorter works. There were so few women in the first decades of these awards I quickly found myself returning to present times, and authors writing now, for sustenance.

My search through these lists proved fruitful and futile. I’d explored new lands, but I still lacked my Holy Grail. I moved on to simply collecting the names of women who’d written science fiction before the seventies, and appreciating what work I had the chance to read. It didn’t take long for me to stumble over a novel titled Memoirs of a Spacewoman. I remember thinking “I’m going to be really annoyed if that title’s a trick.”

The realisation I had in fact found the very thing I’d most longed for was a slow one. It went something like this: Oh, this was published in 1962, how interesting. Oh, the author lives in Argyllshire, how nice… hang on… is she… is she actually Scottish? And she was how old when she wrote this? Oh. Oh.

The most wonderful thing about discovering the existence of Naomi Mitchison wasn’t even that heartwarm glow of a snowy Christmas morning I felt on realizing this was the woman I’d been looking for. That was a moment of delight, but discovering who she was and her extraordinary work and life, has been the real joy. (She was, incidentally, sixty–five when Memoirs of a Spacewoman was published, and so a Victorian by birth.)

Memoirs of a Spacewoman was a fascinating introduction to Mitchison’s work. It was refreshingly different from the sixties science fiction I was most familiar with and most loved. She didn’t care for interstellar wars, or galactic empires, or sprawling space operas (three things, I should say, I care about very much), no, Mitchison used humanity launching out into space as a means to explore communication and family connections, talk about motherhood, and redefine the connection between child and parent. Most of all she talks about empathy and its utter necessity to human exploration.

In her fantasy, she explores the relationship between science and magic, between history and myth, and how we use each to construct our reality. Her most lauded book is perhaps The Corn King and the Spring Queen, a novel Doris Lessing (herself much influenced by Mitchison’s science fiction in her own work) said “[Broke] new ground for women in the thirties.” Here, again, empathy permeates the story as it explores the horror and violence that can come with change, and gives passionate voice to those who suffer most in such circumstances.

Travel Light is Mitchison’s most charming work. It is the creation of a playful, brilliant mind that has been steeped in fairy tales and history for decades. The hero is a young girl called Halla, who is raised by dragons, and learns about heroes and what horrible things they do to her people. Eventually, she adventures out of her fairyland and into recorded history to assist a group of travellers in righting an injustice. In the end, she becomes a Valkyrie. The story is a fun and clever one, but that pales in comparison to how deeply moving I find it: the story, and the hero herself, embrace change. As Halla journeys, she and the land around her change, the stories change, the reality changes, and though there is sometimes sadness at what is lost to the past, there is no fear of what is to come.

Mitchison dabbled fearlessly wherever her interests took her, and amongst her numerous writings outside the SF/F genre world is her historical novel, The Bull Calves. Here she writes about distinctly Scottish concerns and uses the past—in this case the horrors visited upon Scotland in the aftermath of the failed Jacobite rebellion—to discuss her fears for her own community in the wake of Highland decline in the early part of the twentieth century. In being a Scot herself and drawing on her own family history for inspiration, she clearly appreciates the complex pull of loyalties that could affect a family in 18th century Scotland, and writes with a compassion and nuance too often absent in fiction concerned with this frequently romanticized period.

Though first and foremost a writer, Mitchison also had at least a dozen other lives. From the 1940s, she was deeply involved in her local community in Scotland, serving on numerous boards and councils, only leaving the last of them in her nineties; she was a relentlessly outspoken feminist and socialist; she stood as a Labour candidate for Member of Parliament, and was a member of the Fabian Society; and she once threw a half–plucked partridge at Labour leader Hugh Gaitskell’s head during an argument. She cheerfully rejected any social conventions she didn’t like: she shocked her contemporaries by announcing her marriage was an open one; she had trouble getting some of her work published due to explicit references to sex; and she once hit a man at dinner because he suggested the women next to him should fetch his meal from the kitchen. She was an extremely privileged woman, fully aware of her privilege, who spent her life trying to make the world a kinder, more compassionate place for everyone. And nothing she ever encountered dented her energy or optimism.

Most of all, she was not afraid of change, she embraced it, lived it, encouraged it. In her short story, “Soria Moria Castle,” she ends with this image:

“I perceived that the sea was sufficiently near and was, indeed, about to destroy my carefully made castle. Yet this was of no consequence to me, for tomorrow I should build another and better castle which would in its turn come to destruction and a levelling out of walls below the salt quick water.”

Why then had I not heard of her before I began my literary quest? Why, when she was described in her obituaries as “Scotland’s grand old lady of literature,” had her name never been spoken in my English classes, half of them on Scottish works? Why had genre fandom not thrown her work at me, appalled that I, a Scottish SF fan, had somehow overlooked her? Why is Travel Light not given to every Scottish child on their fifth birthday, to teach them about magic and reality, journeys and history?

I don’t want Naomi Mitchison to be part of the history we forget. I want children in Scotland, and far beyond, to know if they want to read about space adventures there was, once upon a time, an Edwardian lady of fearless optimism and boundless energy, who wrote about such things, and many others besides.

I don’t want them to have to search for her name, but for it to be handed to them, as part of our shared culture, the gift of the past, giving us a sense of where we came from and pointing us towards what we might become. We all deserve to see reflections of who we are and what we can aspire to be.

So, reader, I give to you her name, and recommend her writing. There’s no complete bibliography of her published work as they are so varied and there is such a volume of them, but there is an ongoing attempt to create one online. (For any fan of SF/F, I would heartily recommend reading Memoirs of a Spacewoman, Solution Three, Travel Light, The Corn King and the Spring Queen, and To The Chapel Perilous.)

Naomi Mitchison is my SF/F grandmother. Who’s yours? 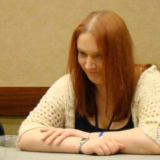 4 Responses to “Quest for an SF/F Grandmother” 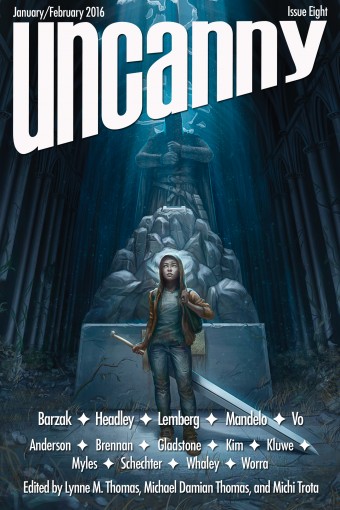