Pro Wrestling Is Fake (But You Already Knew That)

Without fail, this question (or some variation of this question: “picking the winners” is another popular response) remains the immediate follow-up upon learning that I am a professional wrestler. And yes, it’s fake.

To be clear, saying “It’s fake” plays against the traditional mythos of pro wrestling. Giant muscle men fighting for championships. The sport of kings. A sport, period. Never, ever fake.

Knowing the secrets; knowing how the tricks are done while the audience marvels. Pro wrestling was built on this dynamic. We, the performers, know the truth and you, the audience, are fooled. It feels icky to read, let alone to type, let alone to actively participate.

But I am a professional wrestler.

I stumbled through childhood (and teenagehood and early adulthood) as a queer little weirdo. An athlete I was not. But I did watch pro wrestling on TV, when pop culture consisted of Cartman, laser pointers, and “Stone Cold” Steve Austin. Skipping over my almost-careers and law school and student loans we land beside me as I enroll in a wrestling training academy. I paid my tuition—upfront, thank you—and spent a few years struggling to learn the secrets. Who doesn’t want to know secrets?

You can know what I know. Professional wrestling is: theatre in the round mixed with a bit of stunt work. Scripted, sort of; improvisational, definitely. Dangerous by default—but the goal is to avoid injuries.

Here is your hypothetical:

You and your opponent are scheduled to have a match on tonight’s event, a sold-out spectacle in front of a thousand fans. The event begins at 7 PM and let’s say your match should start around 8 PM. The call time at the venue is 4 PM…but after sitting in traffic for 27 agonizing extra minutes, you finally make it to the backstage area at 4:32 PM. Just in time to meet your opponent—actually, at this point let’s switch the language a tiny bit and swap out “opponent” for “partner” —just in time to meet your partner, who has traveled overnight in a semi-reliable Honda Civic crammed alongside four other wrestlers and their pile of Red Bull cans. You now have approximately two point five hours to conceive and choreograph a live performance for a brand-new audience with no time for rehearsals and oh yes—at any point during your act, one step out of place could lead to career-ending, life-altering injury. Do this night after night. New partners. New audiences. New audiences to convince that it’s all “real.”

If you’re thinking this all reads like a scam—it is. It’s designed to be. An industry predicated on a lie—a lie about what is real versus what is fake—designed to keep outsiders OUT. Once the lie is exposed, we can either double down and keep the scam going or we can broaden our idea of what professional wrestling even is.

Once we let the audience in on the secrets, the audience rewards our creativity instead of our toughness. I’m forever seeking credit for my improvisation, not my right hook. And so on and so on. Pro wrestling could not be welcoming to all performers and all fans (and, to be fair, pro wrestling still has a long way to go when it comes to inclusivity) without acknowledging the inherent grift behind the theatrics. I want to be honest in my art. I need the conversation between my art and my audience torn open and exposed. As live theatre, pro wrestling only truly works when the audience participates—cheering and booing and moving the story along through their reactions. Sometimes, the audience reactions can rewrite the script right in the middle of the show! If the audience doesn’t buy into the emotional arc of “the good guy,” that wrestler might change their performance on the spot, transforming into a villain even if just for one night.  Pro wrestling can be fully immersive and fully interactive—and still fake.

Another note: I’m writing about this divulging of secrets, this agreement between audience and artist, as if it’s the normal agreed upon practice these days. No. Keeping pro wrestling “real” remains the priority of the majority of performers.

As for me, maintaining that wall might make for a more immersive show in the immediacy but the implications are dire. An industry—an artform—predicated on a lie cannot ever be inclusive. There remains an inherent power dynamic resulting from performers withholding truths and an audience left in the dark. Inevitably, that same power dynamic will (and has and does) imprint upon the performers themselves. An industry predicated on a lie became a place to keep your sexuality a secret. Out of necessity. Out of fear.

By engaging in a more open, truthful dialogue with our audience, some of us—a growing “many” of us, to be frank—have opened more open, truthful dialogue within pro wrestling. Social media eliminates the geographic distance between us.  Likeminded performers might be a DM away from starting an essential conversation that blooms into an entire movement.

I recently wrestled on an event themed as a “Big Gay Brunch” and it certainly was: Queer pro wrestlers coming together for a celebration of theatrical violence and some English muffin sandwiches. The show drew 600 people at 11 AM and many, many more streamed the event from home. Several fans confessed to me this was one of the only times they felt comfortable in a live pro wrestling crowd, and for some this was the very first show they were willing to attend.

The culture of masculine invincibility is dying. Slowly, surely, we have begun openly discussing what was kept in the shadows. Decades of pro wrestlers dying by suicide. Queer pro wrestlers forced to hide their true selves. Slowly. Inevitably.

This is the only way to keep professional wrestling from swallowing itself whole.

So the next time you scroll through Twitter or flip through the channels and catch a glimpse of pro wrestling, you will know the secret. Yes, it’s fake.  Move past that. We know. You know. We know that you know.  We are trying to entertain you. We aren’t trying to trick you. And in refusing to deceive you, a growing number of us tell ourselves the truth at last. 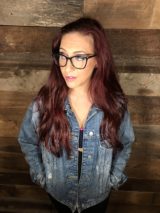 Veda Scott is a professional wrestler and broadcaster. Veda started pro wrestling training during their first year of law school and missed the law school graduation ceremony for a match. They’ve also been a personal assistant, and a TV producer, and an ice cream artist; none of that stuck, but pro wrestling seems to. For now.