Once More Unto the Breach (But Don’t Worry, the Inflatable Swords Are Latex-Free)

You have always been at this birthday party. You will always be at this birthday party. Much like parenthood, the birthday party extends to fill every corner of your waking thoughts. There is a nine-year-old boy chugging root beer straight from the bottle and a six-year-old girl coloring in a heart for Shrinky Dinks. Your own child has found a plastic sword and is banging it into everyone’s chairs. He is the only one who does not understand that this is root beer-chugging time and not hitting-people time. The thought is a heavy bouncy ball, lodged in your windpipe.

There are party games at the birthday party that you are always at. They start with Shrinky Dinks and coloring books and progress to Who Has Found a Good Place to Buy Organic Bananas That Are Also Fair Labor and Still Stay Within Your Means. After that, you move onto Pin the Guilt on the Parent or Other Caregiver. You line up, taking turns against the wall. Nobody pins the ribbons onto you. Each parent does that to themselves, and the blood runs red around the thumbtacks.

The nine-year-old is now throwing up the root beer.

The Shrinky Dink hearts have grown so small in the oven, you can no longer see them. The parents line up for a game of Solve This New Worry, and one by one you crawl into the metal and scour your hands around, looking for the tiny hearts fallen onto the scorching coils. Nobody asked you to play this game. The six-year-old girls have moved on to hitting each other with plastic swords.

There is a face painter at the birthday party you are always at. She will only paint the truest fears of your heart. The parents line up and accept the answers: zombie, ghost, shell of former self, fairy princess, failure. You wonder how the fairy princess keeps the magic in her heart but when she turns you see that she is two-sided, fairy princess/evil queen. (She has failed at providing an adequate learning environment, she tells you later, and is haunted by the choices she made between seven different elementary schools, each with their own cost/benefit analysis.)

The children have flowed outside, a feral mass of plastic swords and sugar. The zombie father chugs the rest of the root beer. It has high-fructose corn syrup in it and the bottle is made from unrecyclable plastic. There are twelve cases of it that somebody mistakenly bought. The more you can drink, the more you will save your children from them. That is the new party game you play, and then you stack up the bottles and watch them overflow the trash can. Outside, the children smash their swords against the preservative-free wooden fence. Since it is not the outdoor kind of plywood that was treated in arsenic, it is ready to fall apart. Bangs and crashes float back from the children at the endless birthday party next door.

Except one of the boards splinters, right in half, and it is not children next door, after all, but a different birthday party, one made up of all the monsters under the bed of the world, silent and noisy, great and small, practical and indifferent and real and terrible. The children banshee whoop and raise plastic swords and you can only see how terribly fragile the plastic is, how it will shatter to shards, and you have not armed them correctly.

Fuelled with thumbtack adrenaline and high-fructose corn syrup, you raid the party favor bags and pass out inflatable weapons to the parents. Axes, scimitars, rapiers, hammers. You fill them with the organic air from your own lungs, a miasma of fright and flight and guilt and self- destruction. The certainty that every choice you make is wrong. That every intemperate word you’ve spoken is needles and glass. The weapons are dense with your shame.

When you are armed, you join the children. Plastic decimates plywood, air trumps barriers, catharsis destroys fear. The zombie dad throws up his root beer. Some of the monsters fall to the plastic swords, some to the inflatable axes. Some of the monsters are befriended by Shrinky Dink hearts, forged from colored pencils and your own blistered fingers.

You are at the birthday party that lasts forever, and you look through the smear of your face paint and raise your inflatable hammer high. Another year of monsters, another year of games, another year gone and another to come. Happy birthday to you, you sing, and all across the backyard voices raise in a ragged chorus.

(Editors’ Note: “Once More Unto the Breach (But Don’t Worry, the Inflatable Swords Are Latex-Free)” is read by Joy Piedmont on the Uncanny Magazine Podcast, Episode 35A.) 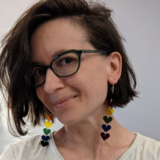 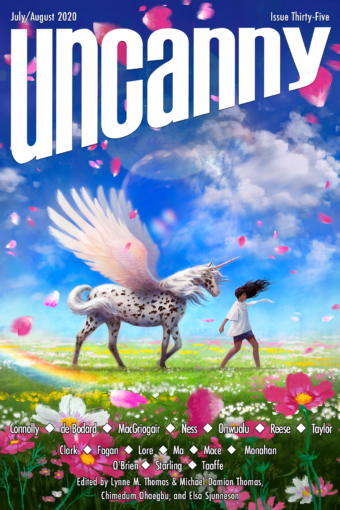