When I was a child, the world had a lot of surprises for me: even as a rough-and-tumble tomboy who delighted in running and climbing trees, the world of books was an endless imaginative joy. It seemed that reading them opened up a door in the back of my mind and I could just fall in: The Chronicles of Narnia, the world of Pern, The Chronicles of Prydain. Despite my frenetic childhood energy, I could sit still for hours, lost in wonder.

TV, except for Sesame Street, was forbidden in my hippy feminist household, and movies were a luxury we couldn’t generally afford. When I did sneak some TV or we rented a movie, they often left me shifting in my seat: everything was flattened. Too bright. Too sleek and produced, the rough edges smoothed away. The laugh tracks grated. With the notable exception of Star Wars, I felt that TV and movies were for other people.

But then at age 12, my parents took me and my little sisters to the dollar theater to watch this wondrous movie called The Dark Crystal. It seemed custom-made for me and my weird, nonconformist family: slow and quiet at times, awkward, dark, and funny. Cluttered and intense and wildly, beautifully imaginative. My sisters and I spent the next months leaping from cliffs (okay the edges of the creek), informing boys that we had wings and they didn’t; turning ourselves into dramatic and evil Skeksis; lumbering slowly through the high grass in a form of a gentle Mystic dance; and limping around glaring through one eye, hollering: “Another Great Conjunction coming up! Anything could happen! Whole WORLD might burn up!”

It took two decades for me to realize that the effect of this movie was far more profound than I’d thought.

When I became disabled at 37 years old, the world still had a lot of surprises for me.

One of them was running into disableism, of course: people seeing me on my forearm crutches and speaking v e r y  s l o wwwwwwwwwlllllllyyyyyyyyyy in a Very Special Voice. People grabbing the back of my wheelchair without asking if I needed help.

But what was shocking to me was how much internalized disableism hurt me, as well.

In our disableist and ageist society, it’s hard to admit that you need to use a cane at 37. It’s hard for many people to use one at 73. So many of us struggle to embrace mobility equipment that we desperately need. We have ideas in our heads that either we are being greedy and are not disabled enough to deserve them (CAPITALISM OH MY GOD), or that using them will somehow limit us, or that it is a sign of weakness.

Please believe me when I tell you that very few women have as much of a machismo problem as I do: I identified early as a tomboy and bought hook, line, and sinker the lie that “physical strength = emotional strength;” that you can tough it out and do anything; that somehow my signs of neurological issues pointed to deep morality issues.

I would take a deep breath, tell myself sternly to just walk down the hallway normally (whatever the hell that meant), and I was determined, and I would do it, and then I just COULDN’T. My legs just would not support me as they had before.

And then something clicked. This was my new reality. I was done fighting it. I immediately started looking for very good mobility equipment. I just jumped right in.

After seeing a mobility specialist, within a few months I had forearm crutches. A few months after that, a wheelchair.

Everyone around me was skeptical. “Was it really that bad?” they asked. “You seem awfully fit to be needing these.”

You’d think that this would have attacked me right where it hurt: in the machismo. But it didn’t.

Because I loved the way I moved in my crutches. When I was going slow, I did an alternative one-two-one-two, supporting my legs that refused to respond consistently to my brain’s commands. When I moved quickly, I planted both crutches and swung my legs and body through them. I moved faster than I ever had on just two legs. I felt fast, strong, free. Using the crutches changed me in powerful and wonderful ways.

Once, my three-year-old made a beeline for the street on his Big Wheel.

I beat his triathlete dad to his side on those crutches.

When I had terribly exhausting days in which I wasn’t able to drag my legs with me, I used my wheelchair: a light, sweet little thing with the deliciously naughty name of a Rigid Quickie (I am not even kidding), it weighs only 15 pounds and has red wheels with yellow spokes, and when I roll on that chair on a decent surface it feels a little bit like flying.

A co-worker once asked me about it: “Is it as bad as it seems?”

“The chair?” he asked. “I’ve always thought it was my worst nightmare, to be stuck in one of those things.”

Where I saw freedom and joy and speed and effortless movement, he saw “being stuck.”

Even when I use only my cane on good days and my leg gives out, for some reason I feel like more of a bad ass with my loping, awkward gait than I just walking the way I had my whole life up to that point. Even in the face of pitying glances.

I didn’t know why I accepted this all in stride (ha, ha, ha—in stride), but I was glad I had. I can see many of my disabled friends and family staggering along in their houses, refusing to leave them as they use the backs of chairs and the tops of tables as support, turning down the motorized cart and deciding not to go to the zoo with their grandchildren after all because they cannot face that thing. Stumbling along and tripping and finding their lives becoming more and more constricted because they cannot handle the stigma of being obviously, visibly disabled.

I was glad I didn’t have this unfortunate internalized disableism stilling my movements, but I didn’t know why I’d found it so easy to make the switch until I sat down with my little boys to watch The Dark Crystal, which I hadn’t watched in decades.

I didn’t know. It took my breath away. The reason why I am fine with moving like this, the reason I am fine with people staring and why I love myself this way, is because of The Dark Crystal.

First, there were the urRu: slow, hunched, exhausted, yet elegant. They moved with a poetry and beauty BECAUSE they were hunched over and using canes. They were stunning in their slow, ponderous, and clearly disabled gorgeousness.

I gasped at seeing myself on my worst days, celebrated as wise and powerful beyond words.

And then, Aughra. Wonderful, pernicious, ancient, and clearly disabled Aughra. Although she has room for three eyes in her head, only one is working, which she uses brilliantly as a prosthesis that she can pluck from the socket and hold out around the corner to see what is coming. She limps EXACTLY LIKE I DO when I have no support. She is large and demanding and overbearing and casually, powerfully impressive in her physicality. She is disabled, and she is a MOTHERFUCKING BADASS.

It was when we got to the Landstriders that I began to weep.

The Landstriders, who seem a bit gangly and awkward if silently impressive at first, can move like THE WIND. And they are played by people on stilts with enormously long forearm crutches.

When they move slowly, they walk like I do. And when they speed up, they are FAST like I am, swinging their bodies between their crutches—I mean forelegs—and zooming along. When they fight armored beasts, they fight valiantly and powerfully. They move the way they move, and it WORKS for them.

Whenever people tell me that representation doesn’t matter as much as I think it does, or that we shouldn’t analyze pop culture from a sociological perspective, I find this baffling intellectually (where else would you look for society’s unfiltered prejudices and anxieties and isms other than in our popular culture?), and I find it cognitively and emotionally dissonant in regards to my own life.

I am certain—wildly, powerfully, completely certain—that watching this movie that delighted in and celebrated disability repeatedly as a child put positive images of and ideas about disability into my brain.

I am lucky that I watched this over and over rather than, say… almost ANYTHING ELSE.

When I look at SF and fantasy, I see it like all art reflects our society’s view of disability: twisted, cruel uncles desperate for their able-bodied, beautiful brother’s glory. Villains in SF described as “more machine, now, than man—twisted and evil.” Even Hansel& Gretel: Witch Hunters—which completed the miraculous feat of showing witch hunters working without lurching into misogyny—showed a witch’s council in which the vast majority of the witches were disabled or moved in a way that is not the usual: it was all staffed with disabled women and contortionists. Awesome to see the council of witches, but my heart sank when I saw it.

Little kids who watch this movie now over and over for the brother-and-sister kickassedry and the delightful camp of it will have this image of disability etched into their brains: Evil. Twisted. Malevolent.

I have no idea what Henson and Oz’s relationship to disability was. I assume they were able-bodied guys. But they somehow created a world that would later help me to be proud of who I was. (So did Madeleine L’Engle with her autistic baby brother Charles Wallace and her learning-disabled protagonist Meg Murray, the latter of whom I instantly, with my learning-disabled self, identified with. So has Jo Walton in Among Others, and a few others.)

Even when comic books start out well, they fuck it up: DC Comics created a wonderful disabled character Oracle beloved by many but especially close to the hearts of their disabled fans, and destroyed her with restored ability I cannot get the image out of my head of artist Jamie Noguchi’s fanart, inspired by the DC Comics’ changes, showing Batgirl striding happily and confidently away from her wheelchair. In that image, the wheelchair was a symbol of misery. Of “being stuck,” as my coworker had seen me when I was at my most free and mobile. It was obviously an image of disability written by someone who has NO IDEA what a wheelchair really MEANS.

It just broke my heart.

We need more Dark Crystals: not just so disabled kids can see themselves up on the screen, but so able-bodied kids like I was can grow up to embrace the disabled people they might later become.

So that we can run into fewer people who cringe away at the unusual way we move or speak or read or learn.

So we can all of us—walking, rolling flapping, shuffling, dragging, running, skipping, and falling—can get to where we need to go in this world together.

(Editors’ Note: This essay as it originally appeared in Uncanny’s Year 4 Kickstarter included two images—of a Mystic, and Aughra—from The Dark Crystal, as well as an illustration of Batgirl, which can be viewed by visiting the Kickstarter Update.) 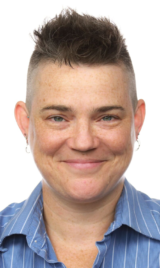