Monsters at the End of the Sewer: Buffy’s Sixth Season Is Now

Buffy the Vampire Slayer wrote the first pages of my adult personality. When I was in high school, my older sister passed down the DVDs as though they were life’s handbooks. I was hooked. The show’s quick and zany sense of humor got me, Buffy’s angst mirrored my own, and the three teenage characters were parsing the same issues I faced in school. As Buffy accepted a claddagh ring from Angel, I was falling for my first love. As I attended the school Homecoming dance, Buffy was fighting hellhounds at prom. When Willow questioned her sexuality, I was coming out too. In several ways, Buffy raised me.

Upon my latest rewatch, I issued a nervous warning to my partner at the beginning of season six, even knowing that he would connect more to the themes of burgeoning adulthood over the prior themes of adolescence. “This season is darker,” I said. I meant truer. The metaphors of the earlier seasons are still relevant—high school will always be hell—but more people today, including high schoolers, are having public conversations on consent and toxic masculinity that make the earlier seasons difficult to immerse myself in. Season six’s complex stories, the lessons it presents to the viewer, are uncannily similar to the issues that are cropping up in today’s world.

During my latest rewatch, I experienced a realization: Xander and Warren are two sides of the same toxic coin. Warren is straightforward in his toxicity; he knows he’s a shithead, and he is unapologetic about his desire to defeat any strong woman who crosses his path. Warren plants cameras to spy on Buffy. He uses a cerebral dampener to turn his ex-girlfriend into a sex slave. The other two members of the trio—Jonathan and Andrew—are excited about the prospect of a woman who cannot turn them down. But when Warren’s ex-girlfriend gains back her free will and tries to escape, Warren murders her and claims it was an accident. He and the trio pin the murder on Buffy, conjuring a demon who scrambles time in order to make Buffy question her reality. They make Buffy question her reality on several other occasions; they put her through a series of tests when she’s trying to find a job: trapping her in a time loop of retail hell, making her stand still in time while her fellow university students race around her, and summoning demons to attack her as she’s working a construction site. Finally, the trio summons a demon whose venom gives Buffy hallucinations that make her think she’s actually in an institution and that her friends and sister are part of a fictional universe she’s been living inside since she was a teenager. The hallucination leads Buffy to try to kill everyone she loves in order to break free of the illusion. Finally, Warren uses magic orbs to gain super strength and attacks Buffy. After his defeat, he trespasses into her backyard and shoots her with a gun, killing Tara instead.

Xander, on the other hand, believes himself to be a “great guy” whilst shirking emotional responsibility for his own life and issuing judgements about his friends’ lives. He summons a musical demon in order to find the truth about whether he and Anya are right for one another when he could have just opened a conversation with his fiancé. Even then, he leaves Anya at the altar, tries to convince her they should still be together, then judges her for choosing to return to her career as a vengeance demon and for her decision to take sexual solace in Spike. He constantly insults Spike. His hatred of Spike is part of a pattern of his deep interest in Buffy’s love life; in earlier seasons, he refuses to tell Buffy that Willow is attempting to restore Angel’s soul, ensuring that Buffy needs to kill her high school sweetheart, and he talks Buffy into chasing after Riley over letting him disappear after he lies to her. Xander disguises his need to control the women in his life as concern.

Xander and Warren are both villains. Warren may be like the gun he uses to kill Tara, but Xander is like the infectious singing spell in “Once More with Feeling.” As a teenager, I was less aware of the Xanders and Warrens of the world. The internet has made sure that few of us can now claim ignorance of entitled men who believe they’ve been wronged by difficult childhoods or bad luck with women. It’s the age of the incel, and Buffy’s sixth season predicted it.

In today’s world, righteous male nerds form their gangs online rather than in a Sunnydale basement, but their conversations are similar. They debate their favorite fandoms and yell when women and other marginalized people enter their space. They message death threats to those they deem enemies in the fictional narratives they’ve crafted. They don’t believe that they—and not the women around them—are the problem with their bad dating luck.

In the trio’s first episode, Warren, Jonathan, and Andrew scribble their evil plans onto a whiteboard: control the weather, miniaturize Fort Knox, conjure fake IDs, shrink ray, girls, girls, the gorilla, and…hypnotize Buffy to “make her our willing sex bunny.” Much like the men who dox and swat people who disagree with them, the trio plays with people’s lives as though they’re the action figures in their glass case.

Warren, Andrew, and Jonathan, Buffy’s only human Big Bads, feel like villains straight out of GamerGate. The biggest terror they bring to Sunnydale, and the central tenant of all their dumb plans, is their utter disregard for consent. How are the women of Buffy supposed to heal and adjust to adulthood, how are we as women in our current society supposed to adjust to the major curveballs life throws, when they’re (we’re) constantly battling threats to their (our) privacy?  Willow, Tara, Anya, Buffy—not a one of these women is able to make a decision regarding her own body, her own life, without it being weighed in on, or even spied upon. Even Willow uses mind-altering magic on Tara without her knowledge; it’s not just men who abuse, after all.

With all the constant battling for their autonomy, no wonder the characters in Buffy’s season six are depressed. Another striking aspect of season six is the lasting aptness of its metaphor for depression, that dark cloud that seems to follow more and more people with each passing year of our tumultuous world. Buffy comes back from the dead, and the world she returns to is harsher for the brief rest she experienced in a heavenly dimension. In some ways, ignorance is that bliss. We’re more aware than ever of the injustices of the world, tuned in 24/7 to the various ways people hurt one another, to the ways modern society and outdated, toxic viewpoints drag us down. Adding to Buffy’s depression are the prior season’s death of Buffy’s mother and a heap of bills that Buffy must deal with upon her resurrection. I feel certain Buffy would sport a Warren or Sanders 2020 hoodie, solely because of universal healthcare.

Buffy makes the same decisions many of us make in our modern desperation: she takes a shitty job out of deep financial need. She takes comfort in Spike, a sexual partner she views as wrong for her. Buffy’s relationship with Spike revolves around rough, passionate, often violent sex. Prior seasons suggest that Buffy’s sexuality and her slaying fight side-by-side. At first she denies that they are connected, but once she is away at college, she embraces the idea that fighting can serve as foreplay. With Spike, she embraces her kink but feels dirty about it. No wonder, with her sexually repressed friend Xander breathing down her back. It’s not just the roughness of the sex; it seems to me as though Buffy’s group of friends are unable to divorce love from sex. Buffy knows that they would shame her for having one without the other.

Buffy is unable to connect to anyone but one man, a man her friends believe is beneath her. This view is proven not by her rough treatment of him—that’s on her—but in Spike’s rough treatment of her, including an attempted rape that feels like a betrayal to the viewer as well as to the characters involved. The show has been redeeming Spike for a season and a half, and suddenly, we’re reminded that he is, in fact, the monster he has always claimed to be. None of our heroes—or antiheroes—are safe from a deeper dive into their actions. Redemption always carries a threat of relapse, and once an abuser, always an abuser. These narrative lessons feel cruel to the characters and to the viewers, but when examined critically, don’t they feel truer today than the easier narrative of a vampire whose soul encourages him to do good deeds?

Still, Buffy’s decision to sleep with Spike is her adult-ass decision to make and doesn’t need to be weighed in on by the men in her life. Because of the judgement of her friends, Buffy keeps her relationship with Spike a secret. At the beginning of the relationship, when Buffy realizes that Spike can hit her, she believes that she came back wrong, that she isn’t who she was before she died. She is almost relieved, and when Tara tells her that anything different about her is at the molecular level, a result of the spell slightly shifting her cells, Buffy breaks down: “Tell me I’m wrong,” she cries. I hurt the most for Buffy in this moment, because I understand her. People with depression wish for a reason, but depression offers no easy answers, no easy solutions. Buffy hopes that that she did in fact come back wrong, that she can be fixed. But it’s not that simple, and for someone who is used to slaying the monster at the end of the sewer, for a character who has won every battle she’s fought, this is a difficult thing to hear.

We’re living the lessons of season six. We’re facing the very villains Buffy faced: entitled men, people who disregard consent then try to convince us that we’re just too sensitive, and the depression that daily fighting in a rough world brings about. When I first watched season six, I laughed at the stupidity of the trio. They were funny. Now, I laugh less easily. I’ve come to view Buffy’s penultimate season through the lens of our modern toxic masculinity and the #metoo movement that held Joss Whedon himself accountable. The moments when I feel like the Scooby gang at the end of a Big Bad battle seem to multiply as the world becomes more frantic and frightening. For this fan, Buffy’s sixth season lives in me like Buffy lives: persistently, and with a strong stake to my heart. 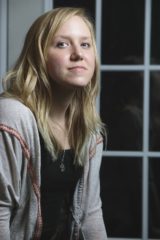 Bonnie Jo Stufflebeam’s fiction and poetry has appeared in over 90 publications such as Year’s Best Dark Fantasy & Horror, Lightspeed, and LeVar Burton Reads, as well as in six languages. By night, she has been a finalist for the Nebula Award. By day, she works as a Narrative Designer writing romance games for the mobile app Chapters. She lives in Texas with her partner and a mysterious number of cats. 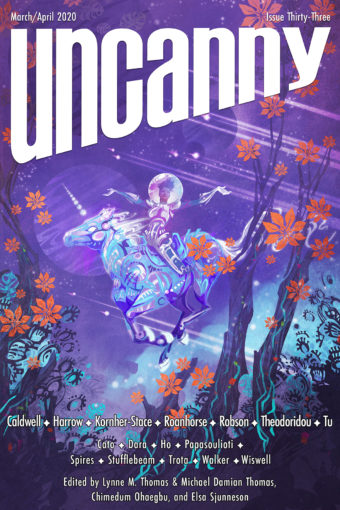