Midnight Mass Talks Too Much but Still Manages to Compel

One thing I’ve learned over the years is the importance of judging works for what they are rather than what they aren’t. As a writer, it can be tempting to break a work open, re-contextualize it, and imagine it as something more fulfilling for myself than what it really was. Midnight Mass carried me down that path many times after I watched it. Does the series ask the big questions and examine their answers, or does it engage in a sort of faux-deep fuzzy-headed dorm room philosophy?

Midnight Mass is the latest horror limited series produced by Mike Flanagan for Netflix. The series is eight episodes long and the first of Flanagan’s series that is not purely a ghost story. The show has been extremely popular, sparking a great deal of discussion since its release. Because viewers return to it over and over, and examine its turns, tropes, and philosophy, it’s worth a closer examination. I, personally, am a born sucker for Horror that is about more than itself, so I’d say I’m inclined to forgive a lot of mistakes and focus more on what a story does right than what it does wrong.

One thing critics mention over and over in their discussion of Midnight Mass is its lengthy monologues about the mechanisms of faith, the afterlife, and existing as an Other—either because of one’s poor choices, or because one has entered a community as an outsider, or both. While I understand and even appreciate Flanagan’s decisions to pursue these ideas, in many cases there were better ways to explore these issues and states of being. “Show don’t tell” is cliché for a reason. What Midnight Mass shows us are arresting images that stick in the mind, and some of its telling works, too.

For instance, after a conversation between the central characters, Riley Finn (Zach Gilford) mentions to his childhood love Erin Greene (Kate Siegel) that his mother never bothers to ask him about his day since he has returned home from prison. Erin asks, and he explains how he trudges through a life darkened by grief and regret. This exchange helps illuminate Finn’s character, mindset, and emotional state. But the problem remains that we are watching a television show in which a man describes his day and it is only indirectly related to the plot of the story.

Though typical of the problem with Midnight Mass, that particular exchange is one of the less egregious monologues exploring ideas and emotions that are not as deep as the series seems to think. If it sounds like I am basically opposed to that sort of character expression, I’m not. Most of the monologues could be improved through ruthless cuts and interspersed action. For instance, at the end of the story, as Erin lies dying, she imagines herself in an earlier conversation with Riley, explaining her idea of the afterlife now that her perspective has been altered by her experiences in the story. Her monologue as the curtain draws down on the story comes across as painfully long. I’m not necessarily asking the show to dive beneath the surface of top-of-mind thinking about life, death, faith, and the nature of evil—though that would be nice—but I am asking it to make these expressions pop. Make them compelling. Make them interesting to watch rather than rocky outcroppings that run the story aground like a dinghy in shallow water.

There are also major story issues in Midnight Mass that can’t stand the light of serious consideration. The fact that Sheriff Hassan (Rahul Kohli) was so shaken by the racism he encountered as an NYPD detective after 9/11 and the death of his wife that his solution was to uproot his young son and move to a remote island where they would be surrounded by Massachusetts Catholics instead of the Muslim community of New York City is…honestly, it’s absurd. Back in New York City, even as a single parent, he would have had the support of his entire extended family, his masjid, and many healthy examples of Muslim manhood to serve as models for his son and help him forge a positive path to adulthood. Is it that the writers’ room wasn’t up to the task, or that the story left no room to explore Hassan’s circumstance and decisions? Sherriff Hassan is one of the most interesting characters in the series, but instead of examining his circumstance beyond his unwillingness to carry a gun or investigate the island’s citizens too closely, we’re forced to listen to Riley and Erin describe the mundane events of their daily lives.

It’s not just Sherriff Hassan who gets done dirty by the show’s lack of focus. One of the major plot points of the series is that Erin Greene’s pregnancy gets cruelly erased because she unknowingly ingests vampire blood. The show seems to touch on this idea because it relates to the Catholic stance on contraception and abortion, but all we get is Erin, gobsmacked, when a mainland doctor explains that there is no evidence she was ever pregnant. The island’s Dr. Gunning briefly explains that the vampiric infection must have driven Erin’s body to eliminate the fetus as a parasitic presence. The idea of a pregnancy being erased in this manner is enough to build an entire series around, but instead we have a few minutes of tears and shouting until Erin simply relaxes about the whole thing.

Midnight Mass has some great things about it—Father Paul (Hamish Linklater) preaches, chews scenery, and is simply magnetic to watch as the mysterious priest who arrives in Crockett Mass after the island’s spiritual leader, Monsignor Pruitt, falls ill during a trip to the Holy Land. Of course, it is revealed that Father Paul is Monsignor Pruitt, his youth and mind restored by a vampire he, in his senility, mistook for an angel. The show seems to take into account the horrific Old Testament descriptions of angels—nominally, at least. Honestly, the angel/vampire in Midnight Mass is far, far less frightening than an abstract being composed of interlocked wheels of fire, each bearing scores and scores of eyes. The show’s heart exists in Father Paul’s misguided crusade and the way a well-meaning pastor spreads a spiritual contagion that destroys the community and family he so dearly loves.

Flanagan has made some missteps before—the ending of The Haunting of Hill House undermined a darkly brilliant ghost story with a ridiculously sappy ending, for instance. Midnight Mass suffers from his worst excesses, and yet…and yet, there is something compelling here. There is something that glued me to the series the first and even the second time I watched it, enjoying the story’s major turns. It’s only after I stepped back and thought more deeply about the story and its issues that the messy seams began to show. For that reason, Father Paul’s misidentification and tragic trust speaks clearly to me.

The series also boasts several sequences of overwhelming horror. The scenes of Monsignor Pruitt, his mind failing from dementia, wandering into the Israeli desert and meeting something awful, the moment Father Paul gives into his terrible hunger, the orgy of blood and violence at the island’s Easter service—those scenes worked like gangbusters for me because they fasten on tropes that have appeared countless times in horror and dark fantasy fiction, and find a way to apply a fresh spin to them. The horror comes from the emotional core of these scenes—normal people finding themselves overtaken by new and powerful urges, the meeting of the monstrous and the mundane. The fear of the Other not just in our communities, but in ourselves. Flanagan’s refusal to use the word “vampire” at any point in the story shows that he was at least trying to take these ideas seriously and re-examine them on an existential level.

If Flanagan could have stepped back from his ideas and more accurately weighed what serves the story and what doesn’t, he would have created something truly beautiful, compelling, and terrifying. Midnight Mass wasn’t quite the triumph I had hoped for, but in it, I see the seeds for better, more effective horror from him.

If you’re looking for a dark fantasy series that puts the effort in, even if it falls short of the mark, this one is for you. You might not be satisfied by the ending—I wasn’t—but in my view, the series treats its subject matter with respect. Flanagan and the rest of the congregation aren’t evil because they’re Catholic. They have a range of approaches to faith, and what makes the story so sad, and so terrifying, is that the things they value—community, solidarity, and care for their loved ones—are truly good things. It’s when an honest value, an ideal, is inverted that the rot sets in and it becomes poisonous. These are the qualities that convince me that once Flanagan gets out of his own way, he’ll be unstoppable. 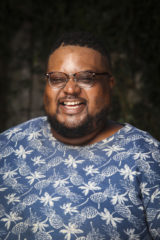 I was born in Wiesbaden, Germany to Foreign Service parents. Since then, I’ve lived in Gaborone (Botswana), Paramaribo (Surinam), Tunis (Tunisia), and all over the United States. For most of my adult life, I’ve lived in New Orleans, and my city expresses itself over and over through my fiction, poetry, and nonfiction. I graduated from The University of New Orleans, and for five years, I MCed and co-produced a popular literary readings series called Dogfish. I’ve worked as a short order cook, a nonprofit fundraiser, a teacher of both adults and children, an actor, and a stand-up comic.