Living, Working, and Fangirling with a Chronic Illness

One result of being a “professional fangirl,” writing about fandom and pop culture for a living, is recognizing the intersection of work and personal life, and becoming hyper–aware of how both shape your identity. A common mantra among career coaching and self–help circles is to “do what you love” and for a lot of us, what we do—and what we like—play a huge role in how we self–identify and present ourselves to others: “I’m a writer.” “I’m a Marvel fan.” “I’m a cosplayer.”

When you’re lucky enough to be able to immerse yourself in the sci–fi, comics, and music that you love all day long—and do it for a living—it’s easy for that to become an all–encompassing part of your life. I’ve always considered myself geeky, and I’ve always aspired to make writing my career, but I never really noticed or appreciated how much of my identity was shaped around my fandom and work, until that sense of identity was threatened because of chronic illness.

Seven years ago, I was diagnosed with keratoconus, a degenerative eye disease that leads to distorted, blurred vision for those who have it. For many people, the disease is manageable, in rare cases, less so. I currently exist on the latter end of the spectrum. At the time I was diagnosed with keratoconus, my life revolved around visual–based work and avocations. I worked in digital marketing during the day and spent my evenings freelancing as a pop culture writer and publishing a website called The Learned Fangirl, which looks at fan culture and geek culture from an academic perspective.

When I was first diagnosed, the disorder didn’t really impact me much. A bigger screen at work kept life pretty manageable, and I easily worked 12–14 hours a day in front of a screen, including my freelance writing and the writing I did for TLF. Then, around three years ago, my vision started to deteriorate significantly. I was making more errors in my work due to my vision problems, and eye–strain made the freelance writing and editing I did for The Learned Fangirl into a stressful chore. That realization hurt more than anything else, because TLF and writing was what I wanted to be doing. I had spent most of my life aspiring and working toward a career and a life in writing. With TLF I was getting so close, and losing my vision made me feel like it was slipping through my fingers.

Working to identify and receive the appropriate treatment in order for me to properly see started to drain me of energy and money (my struggles with health insurance is its own essay). I eventually chose to leave full–time office work and became a full–time freelancer, because it allowed me to supply my own accommodations at home and work at my own pace when needed. But I didn’t anticipate how much my vision disorder would eventually affect my own view of myself, my work, and my life in fandom.

In pop culture, disability is a trope, especially visual impairment. Through supernatural abilities (Toph’s earthbending on Avatar: The Last Airbender) or through intense training (Matt Murdock/Daredevil) characters gain extraordinary abilities to compensate for the sight they don’t have. I’m not going to say the trope is always a negative one, or the result of lazy writing (Toph is an all–time favorite character of mine). But there are still so few stories—even our most fantastical ones—that portray illness and its struggles as a part of daily life for people who don’t have superhuman abilities to empower them.

There’s not enough honest conversation about how chronic illness and disabilities make participation in geek communities a different kind of experience for many of us. Recently I went to an “unconference” tech event that put in a lot of effort to increase diversity. However, the event itself had signage and projection that was completely inaccessible for anyone with vision issues. The people and community were great, but that lack of accommodation made participation all the more of a pain for me, so I ended up opting out of a lot of it and going home early. I am sure that even among the most well–meaning of communities, this kind of unintentional exclusion happens a lot, and without much mention.

There have been many times when doing the things I love felt like the worst parts of a job. A big part of contemporary fandom is active participation, being present and keeping up with the latest releases, going to cons, being active on social media, etc. The stress (and frankly, the shame) of not being able to read a book or a comic or see a movie properly simply kept me from doing it. Of course, this affected my ability to be, or at least my self–perception of being, active in fandom on a lot of levels. Learning to live with and adjust to my illness took a lot of time and energy away from that participation, even when I wanted to do it.

I haven’t felt personally or purposefully excluded from geek fandom spaces because of my illness. I have great friends and colleagues who have been very supportive and patient with me. But I do often feel like I’ve let other people—and myself—down, like my participation in fandom doesn’t quite count as much anymore. I have cancelled more than one speaking engagement at cons this past year alone, because of health issues. I missed a panel at C2E2 and a speaking engagement at a Star Trek convention this past year because of really painful corneal inflammations. I remember feeling scared that no one would ask me to do panels anymore, or even worse, that my friends would just stop wanting to hang out with me because I am unreliable. I’ve thought about quitting The Learned Fangirl in the past couple of years, in part because it was harder on my vision for me to keep up with doing the editing work, but also because I felt a bit like an imposter. I wasn’t an active participant in fandom the way I used to be, because treatment had taken up so much of my time in recent years. I didn’t want to have to fight another battle to justify my career or my place in fandom.

Modern culture, particularly in the U.S., doesn’t socialize people to normalize chronic illness and disability. We’re taught to either push our way through illness or disability to not appear “disruptive” to others, or conversely we make illness or disability the focus of a person’s identity. One is either self–sufficient or totally helpless, always ill or a fighter who has “beaten” illness. There’s little room for what’s in between, which includes a lot of people living daily with chronic illness or disability.  In the past year or two, I’ve become a lot more public about talking about how keratoconus affects me daily. I started doing it for personal reasons: I felt like I was hiding a part of myself from people that cared about it. But I still struggle with this mindset personally, often beating myself up for not being able to “compensate” for my lack of vision adequately enough when I need help reading a sign or crossing the street at night.

Even as fan communities become more transparent and open in our conversations about diversity and inclusion, we still don’t fully know how to talk about daily life for people with disabilities and chronic illnesses. As with people of color, people with chronic illness and disabilities are already an active part of geek culture/fandoms and have been for a very long time. It’s just that until recently, our stories, voices, and perspectives weren’t commonly a part of conversations about participation and inclusion. As a result, we still don’t have all of the necessary 201–level conversations about the work to be done to make fan communities more accessible. There are still too few cons with adequate accessibility policies, too few websites, podcasts, and YouTube videos that are fully accessible to those with vision, hearing, and learning disabilities.

I’ve been working to make The Learned Fangirl a fully accessible publication in the past couple of years but I will sheepishly admit that even I’m not as good about consistently making my website as accessible as it can be via metadata and photo descriptions. Incorporating accessibility as a part of our website’s editorial and design structure is an important goal for me in the coming months.

The current speed of the online publishing industry also creates barriers for many with chronic illnesses and disabilities to participate and do their best work. My co–founder and I recently decided to move TLF to a slower, long–form based publishing cycle, in part because it better accommodates my own life and is easier on my vision. But on a broader level, I hope it creates an opportunity for writers to take their time on pieces and is more forgiving for those who may not be able to turn around a piece of writing quickly due to illness or other physical barriers. Writing about disability in pop culture is something we want to do more of, but not in a way that continues to marginalize the topic. We want to incorporate it as a part of how people live every day, because it is.

When so much of participation in fandom is focused around visibility, it’s very easy to feel like there’s not much of a place for if you don’t see room for you to participate. I’ve often said that being a black woman prepared me for eventually living with a disability that most people don’t see because black women know what it’s like having to justify your own lived experience to people who may not completely believe you are being honest about what you are going through. The idea of having to fight multiple battles for representation and respect within fandom communities as both a black woman and as someone with a visual impairment just seemed too emotionally exhausting, no matter how important doing The Learned Fangirl is to me.

But the fact is I’ll be fighting these battles no matter what I’m doing professionally. I’m a black woman with a visual impairment every day, but I’m also a fangirl and a creator every day. I don’t want to stop doing what I love, I want to create more opportunities for me and people like me to feel empowered to participate as fans and creators on their own terms. I only regret that it took my own illness for me to become more acutely aware and outspoken about the issue of accessibility and inclusion for people with disabilities and chronic illnesses in fan communities.

Our culture’s reluctance to accept illness and disability as normal can make it difficult for many of us to recognize what’s needed to create environments that make all people feel welcome, as well as liberated to be all of who they are. But I think the more honest—and public—we are in talking about how normal disability is in everyday life, the more proactive we can be in creating fandom environments—online and off—that are welcoming for people with disabilities and illnesses so that everyone can feel open to participate. 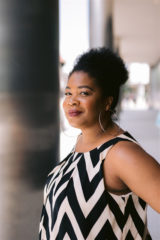 Keidra Chaney is a writer, editor, and professional social justice digital rabble-rouser. She has been published in Chicago Sun-Times, Time Out Chicago, Chicago Reader, Paste, and a bunch of publications that no longer exist.

She is online at keidradchaney,com and on Twitter @kdc

One Response to “Living, Working, and Fangirling with a Chronic Illness”