A. T. Greenblatt is a mechanical engineer by day and a writer by night. She lives in Philadelphia where she’s well acquainted with all four seasons and is known to frequently subject her friends to various cooking and home-brewing experiments. Her recent publications include “A Place to Grow” and “A Non-Hero’s Guide to the Road of Monsters.” She has a knack for creating protagonists that readers can genuinely root for, and puts those characters into situations where finding the right path is not always easy or clear. “And Yet” is Greenblatt’s first appearance in Uncanny.

A. T. Greenblatt: As someone who is almost always battling anxiety, facing my fears is a two-step process. First, I try to think of what I’d do in the situations I’m worried about. (What if I get stranded at the airport in the middle of a terrible storm? Pack spare clothes in your carry-on. Have the number of a local hotel written down.) I found having backup plans helps. Sometimes it’s even enough that I can skip the second part.

But if it isn’t, the second step is to use my anxiety against itself, which I’m not sure is exactly healthy, but it’s effective. I tell myself that if I don’t do this scary thing, something scarier will happen. (If you don’t go on this trip, you will never get another chance to travel here and you will always regret it.)

Though it might not seem like it from this example, I really do love traveling. But no matter how many miles of experience I have, every time I visit a new place, I have to stare down the same fears.

Uncanny Magazine: You recently attended the Clarion West Writers Workshop, during which you lived in a big older house with all of your classmates for six weeks. Was that house a source of inspiration for this story? More generally, what impact do you think the workshop has had on you as a writer?

A. T. Greenblatt: “And Yet” was the first official story I wrote in Clarion West and it was the first piece of work my classmates saw from me. That initial draft was a complete wreck though—I wrote it in five days. I don’t think the sorority house itself inspired this story, at least not consciously because I scribbled down the opening lines a week or two earlier. But it did take shape there. I remember there was this very precise moment when I was sitting in my dorm room, staring out the window, and I realized that the protagonist’s point of view was all wrong. I had started writing the piece in first person and I was struggling, but in that moment, the lines and voice started to write themselves in second person, and the character’s voice and the tone just clicked. It was one of those magical little moments in writing.

I’m still trying to sort out how Clarion West has altered me as a writer. I suspect it’s the summation of a hundred small lessons. I do think it’s made me a more efficient critiquer and I can also work through story drafts faster. Which is not to say drafting has become easier, because it hasn’t. It’s more like going up a difficult trail that you’ve been hiking more consistently. There’s no new short cuts and just as many rocks, but you’re more familiar with the route and you know you can make it to the end, because you’ve done it plenty of times before.

Uncanny Magazine: This story features parallel universes. If it was possible to go and visit a parallel universe to see the other possibilities of what could have happened differently at some juncture in your life, would you want to do it?

A. T. Greenblatt: A small part of me is fiercely curious about what would have happened if I’d made different choices at different points in my life. The rest of me realizes that having that knowledge would probably be a terrible, terrible idea. I mean, I already have hindsight and self-doubt constantly following me around.

I imagine if people could reference parallel universes, it’d be a rabbit hole. Once you began exploring the different scenarios, you won’t be able to make a decision without checking out other parallel universes first. But then, the more you look, the more possibilities there are until the simplest decision becomes a chore. It’d be like trying to pick cereal in the grocery store. Too many options, so you just give up and go with oatmeal instead.

Uncanny Magazine: In your Kickstarter essay for Disabled People Destroy Science Fiction, you talk about having cerebral palsy and the need to find a balance between your abilities and your goals. You describe the kinds of disabled characters you’d like to see more of in fiction—characters who have found balance, who solve problems and have adventures. “And Yet” has a protagonist who fits this description. In addition to the need for better representations of disabled characters, what changes would you like to see in fictional representations of societies or worlds?

A. T. Greenblatt: Yeah, I realized after I wrote that essay I needed to start creating more of the characters I wanted to see. With “And Yet,” I based the protagonist’s disability on cerebral palsy, partially because I haven’t read too many stories featuring characters with CP and partially because I wrote the first draft in less than a week and decided to go with the old and flawed advice of “write what you know.”

In terms of other fictional representations, I was actually complaining to friends last weekend that we don’t see enough healthy friendships between women in fiction. Which is sort of strange to me because it’s not like it’s a rarity in real life. Actually, I would love to see more equal platonic relationships in stories in general.

I guess I know what I need to write next.

Uncanny Magazine: There is a description of a terrible meal that the protagonist has to eat before leaving the table. What was your least favorite meal (either from childhood or as an adult)?

A. T. Greenblatt: Unlike the protagonist’s mom, my mom is actually a really good cook, so I don’t remember too many meals I didn’t like as a kid.

With one notable exception: Lasagna.

It was something about the combination of textures of the cooked spinach and cottage cheese. I was so adamantly against it when I was a kid that I wrote a story about the horror of being the only person in the family who didn’t like lasagna for a school project once. I think it was one of the first stories I ever wrote because my parents still have it a copy of it and it still made my dad chuckle when I asked him about it over the weekend.

I eat my mom’s lasagna now, but the texture of cottage cheese still weirds me out and even though I love to cook, I’ve never made it for myself.

A. T. Greenblatt: I always have a short story or five to revise. My goal this year is to learn how to write some longer works, so I’m currently working on a second world fantasy novelette and hopefully (hopefully) outlining the basis for a novella. Usually when I’m writing, I make things up as I go along, so outlining is like a strange, oddly shaped tool that I’m trying to cram into my writing toolbox. We’ll see how it goes. 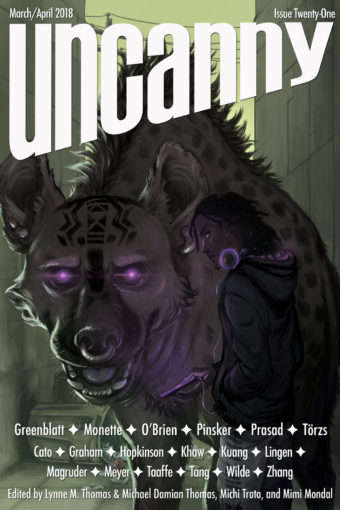