S.B. Divya holds degrees in Computational Neuroscience and Signal Processing, and worked for twenty years as an electrical engineer. Divya uses her academic and engineering background to create vivid, well-imagined futures, including the high-tech world of her Nebula-finalist novella, Runtime. “Contingency Plans for the Apocalypse” is her first appearance in Uncanny, and she has once again created a dark and compelling science fictional world.

Uncanny Magazine: Integrating technology with human biology is a recurrent theme in your work. Many science fiction futures erase disability, so it is refreshing to see worlds that instead incorporate assistive technology. In “Contingency Plans for the Apocalypse,” the protagonist wears a prosthesis. Your novella, Runtime, features a variety of body enhance-ments. How does your academic and engineering background inform the medical technology you include in your stories, and what directions do you think medical devices will go as we move into the future?

S.B. Divya: Back in college, I was lucky to work with several professors in a relatively new, interdisciplinary department at Caltech called Computation and Neural Studies. One area of research took computer chips and wireless communications and applied them to motor control. I was fascinated by it then, and I love seeing it in use today to treat paraplegics and quadriplegics. We’ve also seen that a segment of society (today) will gladly embrace putting electronics under their skin for sheer novelty and utility. I used that concept in Runtime, and I believe we’re on the cusp of seeing this technology gain widespread usage.

I’ve also had many fun discussions about the fuzzy line of cybernetics. We could say that people today are already cyborgs. We have pacemakers, titanium bone replacements, drug pumps inside our bodies. Even the numerous medications we ingest are the products of biochemical engineering. Outside our bodies, medical devices are no longer limited to the large machines of the hospital. Your smartphone, smartwatch, or Fitbit can act as diagnostic device. Biomedical engineers are working to miniaturize further, to where you can swallow a pill containing micromachines for diagnostic and/or treatment purposes. I’m excited to see where this goes in the next decade or two.

Uncanny Magazine: You write vivid and well-paced action sequences—e.g., the attack that sets this story in motion and the subsequent escape sequence. What makes for an engaging action sequence, and what tips do you have for people trying to write them?

S.B. Divya: Firstly, thank you! Secondly, I approach action sequences from my own experiences with adventure sports. A decade ago, I wrote a LiveJournal post about one of my favorite mountain bike rides (Bearclaw Poppy in St. George, Utah) in which I tried to set the rhythm of my prose to mimic the physical action of the ride. It was very choppy and immediate and relied on specific action verbs (turn, dip, climb, bump, pedal!). I got feedback that it was really fun to read so I use a similar style in my fiction.

If you’re writing an action sequence from a close POV (which is what I like to do), you need to give the reader the experience of the character. When you think about anything physical you do that’s fast-paced, you realize that you’re acting on instinct. Conscious thought tends to be broken, interrupted by movement. Realizations are sudden and fleeting. Reflection has to come later. I try to stick to that when writing action sequences, but I also try to create situations where the protagonist has a few moments to stop, breathe, and take in their surroundings. I think readers need those pauses, as well.

S.B. Divya: I couldn’t write this story fast enough! It’s one of those where the idea came to me (one morning in Mammoth Lakes, after a weekend of snowboarding), demanded to be written, and wouldn’t let go. The first draft spilled out in two days, which is nearly a record pace for me.

The toughest part about this story was deciding how much of myself to put in it. There’s a lot more than I usually incorporate into a character. I struggled with that level of personal revelation, but the story comes from one of my long-standing, deep-seated fears: how would I survive a disaster?

I have terrible myopia (literally can’t see much past my nose). Fortunately, it’s correctable with glasses or contacts, but at night, I was always nearly blind. I developed strategies to deal with that, but I’ve always wondered how I’d cope with an apocalypse. My glasses were thick—so distorted at the periphery that it was hard to run or climb in them. Contacts had to be removed daily. A few years ago, I got surgery for intraocular lenses (basically soft contacts that go beneath the cornea), which has made me feel safer, but I know they can fail someday, too.

Also, like the protagonist, I’m not terribly strong. My endurance has never been great. So I wrote the story to play out a scenario where someone like me has to manage (full disclosure: I’m an inveterate planner). I’d like to believe that we’re all capable of more than we realize, and when the occasion demands it, we will rise to the challenge.

Uncanny Magazine: One theme in “Contingency Plans for the Apocalypse” is family, and the difficult problem of balancing the safety and well-being of your family with the danger of working for the greater good. How do you think the concept of “family” will change moving into the future? Do you think evolving family structures and dynamics will make it any easier to balance family needs against community needs?

S.B. Divya: Given the trends, I have to say, unfortunately not. The nuclear family structure combined with suburban lifestyles have, in my experience, made it a lot harder to balance family needs with the rest of life (both work and community). The joint-family and village structure have their share of problems, but they provide better support for parents to have a life outside of the home.

I’d hoped that technology—especially the internet—would help address some of this by creating better virtual working space, and it has but only to a point. Businesses have been slow to embrace telecommuting, which would be a boon to families. Internet forums and social media are double-edge swords, providing a sense of community support in some spheres, but also creating social pressure to conform in others.

Raising children fundamentally requires colocation. We’re mammals. We need cuddles. Virtual reality might replace the classroom, but it can’t replace the home. We also, for now, need handshakes and boardrooms, or so it seems, but I’m hoping that we continue to push technology to free us from that. I’d love to see a future where we live in villages or co-ops but do our work remotely.

Uncanny Magazine: This story features people resisting a corrupt government and fighting back in a variety of ways. If you were a character in this story, who would you be? Doctor, data miner, part of the underground network helping people get out… or would you do something else entirely?

S.B. Divya: I am definitely the data miner! As I said to question #3, the protagonist of this story captures a lot of me in them. I’ve worked in pattern recognition, machine intelligence, and signal processing, all of which have to do with extracting useful information from a noisy environment.

Would I be part of an underground resistance? Maybe. I’m pretty risk averse, and I built more courage into the character of my story than I think I have in real life, but who knows? Under the right circumstances, I would certainly fight back.

S.B. Divya: For short fiction, I’ve got no irons in the fire at the moment. I’ve been working on a near future, hard science fiction novel (set in a different world from Runtime) that’s taking up most of my writing time. I won’t quit short fiction, but my output has definitely dropped since moving to long-form. My editorial work at Escape Pod keeps me busy, as well, but it also helps me stay engaged with short science fiction, which I love. 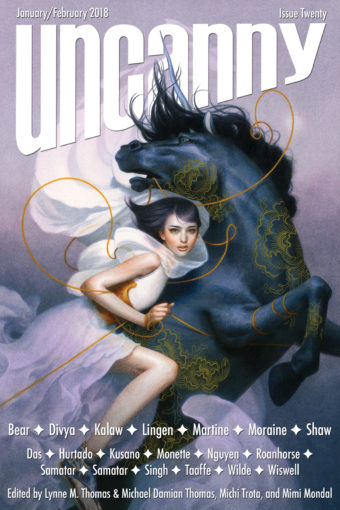