Merc Fenn Wolfmoor is a queer non-binary writer who likes dinosaurs, robots, monsters, and cookies. Their vivid and emotionally-compelling fiction has appeared in Lightspeed, Nightmare, Apex, Fireside, and Shimmer. Their stories “How to Become a Robot in 12 Easy Steps” and “This is Not a Wardrobe Door” have been included in The Best American Science Fiction and Fantasy, with the latter also being a Nebula Award finalist in 2016. “If We Die Unjustified” is Wolfmoor’s second appearance in Uncanny.

Uncanny Magazine: The opening nursery rhyme is very attention-grabbing. Real-life nursery rhymes are often similarly dark and disturbing—“Ring Around the Rosie,” for instance, is about bubonic plague. Were nursery rhymes the inspiration for this story? Do you have a favorite nursery rhyme?

Merc Fenn Wolfmoor: I love the creepy nature of nursey rhymes. While I don’t have a favorite one, I was aware of the origins of “Ring Around the Rosie” from a young age, and used to horrify my friends with this information about plague and death. Also, when I was a very little smol (maybe 2 or 3 years old), I apparently sung myself to sleep with “Swing Low, Sweet Chariot.” That one, however, I wasn’t aware of the context until I was much older! The seed of this story did come from composing the “Angelcorpse” rhyme, and then needing a story to add it to.

Uncanny Magazine: The story is told from the perspective of a dog. What were the advantages and disadvantages of telling the story in this way?

Merc Fenn Wolfmoor: One advantage was voice and perspective—I could get away with a lot of allusions to what is going on without necessarily going into excessive detail or time. Plus I love playing with voice. Sallow is a good boy and his POV was such fun to write. The disadvantage was questions of agency, when Bryony is doing the heavy lifting thematically, of how to make him active while still being, essentially, a sidekick (Watson to Holmes, etc.). I found myself returning a lot to choices, which are a form of action in narrative. Choosing not to act is as much a choice as acting, after all.

Uncanny Magazine: I love the variety and range of your stories—monster girls, robots, dinosaurs, portals to other worlds. You write both SF and fantasy, lighter stories and darker ones. Within this huge range, what common threads tend to appear in your stories? What themes or topics do you find yourself returning to again and again?

Merc Fenn Wolfmoor: Thank you! ^.^ A few of my favorite themes tend to revolve around found-family, belonging, friendships, and how we treat each other as people. I find the emotional resonance in connection to be a powerful narrative and thematic tool, and I do like writing things that make you feel something.

Uncanny Magazine: “If We Die Unjustified” contains violence and death, and parts of the story suggest that most people aren’t good people. However, Bryony tries to make the world a better place by ending all the violence. Do you see this as a cynical story or a hopeful one?

Merc Fenn Wolfmoor: I think it’s a bit of both—I really wanted an “OH SHIT” moment in the ending, when you consider the full implications of what happened, and the seismic effect this will have on a world-wide scale.

Uncanny Magazine: At the end of the story, Bryony must destroy what she cherishes most in order to change the world. Initially, it appears as though she will sacrifice her dog, but then she realizes that what she cherished most was Angelcorpse, and the hope that Angelcorpse would save her. What do you hope readers will take away from this ending?

Merc Fenn Wolfmoor: Honestly, I am the worst at figuring out what anyone (including me, sometimes!) “takes away” from a story’s ending, especially something rather brutal like this one. I do hope people have a reaction to it, because that tells me it was effective on some level. 😀

Merc Fenn Wolfmoor: As of this interview, I’m working on a new novel—which actually has a lot of tonal and aesthetic similarities to “If We Die Unjustified” except it’s a human POV, and which I’m not pitching as “queer af Paradise Lost meets Les Miserables”—and a trio of short stories for a dystopian triptych anthology edited by John Joseph Adams, and working on my Robot Dinosaurs project! 😀 (Which you can see at robotdinosaurfiction.com) 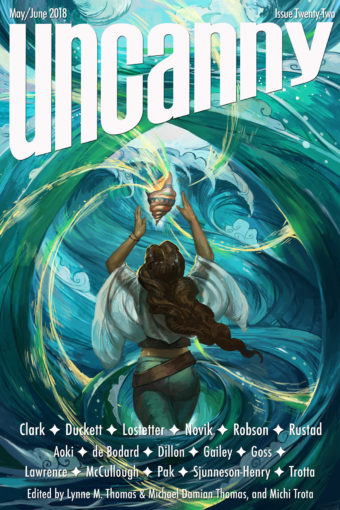