Marissa Lingen is among the top science fiction and fantasy writers in the world who were named after fruit. She has many opinions on Moomintrolls. She has been known to cross international borders in search of rare tisanes. Her personal relationships with bodies of water are intense though eccentric. She lives atop the oldest bedrock in the US with two large men and one small dog, where she writes, if not daily, frequently. “This Will Never Happen to You” is a powerful and personal piece of flash fiction dealing with spores, disability, and family.

Uncanny Magazine: Flash fiction is meant to be concise and direct, every word precisely weighed and measured for maximum impact. “This Will Never Happen to You” is exemplary of the form. What is it about such minimalist stories that appeals to you as a writer?

Marissa Lingen: I really love implication. I’m from the Upper Midwest of the US, where a lot of our communication is terse and indirect. But for me, that leaves room for very powerful communications to be done in very little space. That’s true in a story too—I love the way a good flash story gives you enough to unfold worlds in your own head. The fireworks often come afterwards, as you’re thinking about the story.

Uncanny Magazine: There is the sense of the autobiographical to “This Will Not Happen to You.” What was the most difficult part of writing this story? How much of Marissa Lingen made it to the page?

Marissa Lingen: The most difficult was the part about her mother. I can say things about my experience of disability, but that… that was about saying to my mom, I see you too, I see you through all this. I can speak for me, though I’m still new to this kind of writing; my voice still shakes when I do it. But the lines that are about getting it right for someone else, those are hard.

Obviously, we haven’t had a spore-based epidemic. This is not me… per se. But I went through a lot of the steps of “I think we’ve got it now! …wait, no…” that I think a lot of disabled people do. The frustration, the moments of humiliation, the long-term accommodation… that’s changed details but emotional reality. I’m still finding the balance of how to do that, with this story and with “Flow” in Fireside earlier this year. But I like where I’m going with it, even as it terrifies me.

Uncanny Magazine: One line that struck me was: “The odds of a neural mismatch that bad have gone down, and everyone knows that if someone says that it’s 95% odds, that means no one you know will get it.” Indeed, many people do think “it will never happen to me” and, wittingly or unwittingly, overlook the impact of a disability on their lives or the lives of someone they know. Why do you think that is?

Marissa Lingen: I think people are scared. I think people are looking to feel safe. The question I am asked most often by people who don’t know much about my disability is: what did you do? I didn’t do anything. Which means that there’s nothing they can do to have this not happen to them. And that’s terrifying. It’s very vulnerable, looking at other people and saying, yes, that could happen to me, the parts of my body that now work could betray me, things that I think are fundamental to me could slip away from me forever, and there are things I can do to make that less likely, but there’s nothing I can do to make it impossible. Bad things are not always correlated with bad people, or with stupid mistakes. Quite often they just happen. And this is a metaphysical truth of the universe that a great many people do not want to think about, ever. It would be so much more comforting if I had done something foolhardy that they could avoid. If I could be a cautionary tale. But I’m not; I’m a person whose body does excellently well at some things and dreadfully at others.

This is a highly intersectional issue, of course, not just disability. People who will self-describe as being 100% against racism will go searching for things a particular person of color did “wrong” to justify staggeringly bad treatment from an establishment or from “respectable” white people. Those of us with experience with reporting sexual harassment know very well that if there’s the slightest imperfection in any of our behavior, ever, then we “deserved” it. The phrase “to be fair” is weaponized to be completely unfair, as in, “to be fair, they shouldn’t have been there [in a perfectly legitimate public space] or the bad thing would never have happened.”

I think we’re particularly emotionally bad at statistics, and I wanted to highlight that. 95% odds are one in twenty. One of the comparisons I ask for is: how many people were in your high school graduating class? Mine was about 220. So that means that something with only a 5% chance of happening will, on average, happen to 11 people in a group that size. Some things aren’t random, of course, so you’ll end up with 60 instead of 11, or 2 in a different group of 220. But I think when people hear, “95% chance of a match,” you think, “probably it will match.” And that’s true, it’s entirely true. It’s just that it’s the kind of unlikely that will happen to several people you went to school with, rather than nobody you’ve ever heard of. You can use other population groups if you want, of course—how many people were at your college, how many people live in your hometown. But if you’re measuring over and over again, even a well-rigged coin will sometimes turn up the wrong face. 95% in a population of 220 is 11 people. Grab a high school yearbook and look at their faces, and tell me again what’s too “unusual,” too “rare” to need services, or attention, consideration, planning. Some outliers don’t lie out as far as our anxious optimism would lead us to believe. Even the ones that do—we need to remember that rare and nonexistent are not the same.

This story is not a very nice story, because it rubs people’s noses in those probabilities. It is a story that asks people to sit with the knowledge of their own fragility. I’m not always a very nice writer.

Uncanny Magazine: In this story we see the growth and progress in treatment for the fungal infection that causes such damage, yet for every two steps forward there is a critical step back that directly impacts the lives the cure is meant to help. What progress would you like to see made not merely in “curing” a condition, but in improving the lives and comfort of people with disabilities?

Marissa Lingen: I think that even taking those into consideration as factors will be great progress. This week a loved one saw two doctors for a particular problem, and one of them said, well, you’re going to have to live with it, because this factor in your health is more important than your day-to-day life and comfort. And the other one said, this is not an acceptable way for us to ask you to live, let’s find an alternative even if it’s a bit more obscure. The second doctor made such a difference. My loved one came home heartened and ready to keep doing things in their life, their way, rather than drained and frustrated and losing sight of what makes them themself.

I think one of the crucial answers to your question is not settling for “good enough,” and another is letting disabled people collaborate on the concept of what “good enough” might look like. Because it doesn’t just mean “convenient to others” or “not too unsightly.” Over and over again in working with poverty worldwide, studies show that poor people know what they need. That letting them make their own choices has better outcomes. That’s true for us disabled people too.

Uncanny Magazine: How do you think your own disability has impacted and informed your writing?

Marissa Lingen: Oh, that’s a big one. It’s changed what work I can do when. I apprehend all sorts of things differently, not all of them directly about disability. Because I have a balance disorder, I have to consider three-dimensional spaces in ways that I wouldn’t otherwise. I wrote about this a little in my essay in support of this project’s Kickstarter—that my ideas of zero-gravity, of life in space, are very much shaped by not knowing which way will be up at any given moment.

Also, on a very basic note, the hours when I really can’t move around safely much are quite often hours I spend reading. I read fast, copiously, and broadly before the vertigo, but one of the things I have to remind friends of when they’re bemoaning their inability to keep up with how much I read is that it relates very directly to how badly I’ve been doing in a given month. Still, it’s lemonade to make with that particular lemon.

I also think that it’s very easy not to notice some of the stuff I talked about above, about being vulnerable as a human body in various ways, if you don’t have to. I’ve had to. I’m glad I have. I would rather have that awareness of vulnerability than its blithe absence. I think it makes me a more careful and nuanced writer. I hope it does. 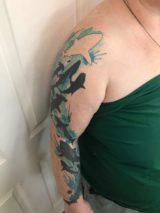