Kenneth Schneyer is a writer (by inclination), a professor (by occupation), a lawyer (by training), a project manager (by default), and an amateur astronomer (by avocation) living in Rhode Island.  He’s been a finalist for both the Nebula and Sturgeon Memorial Awards, and has published more than 50 stories that have been translated into Italian, Czech, Russian, and Chinese.  His second collection, Anthems Outside Time and Other Strange Voices, was released by Fairwood Press in July of 2020. “Laws of Impermanence” is his second appearance in Uncanny, a fascinating exploration of a world where written texts shift with the passage of time.

Uncanny Magazine: I love the idea of texts changing over time if they remain unobserved, and the many ways in which this impacts people is deftly handled. What was the biggest challenge in creating this world? Did you stumble across any unintended consequences as you were writing?

Kenneth Schneyer: Given how heavily human civilizations have depended on texts, a premise like this one, taken to extremes, would change every facet of society. At novel length, one might gradually acclimate the reader to such a landscape and enable them to navigate within it. In 3,800 words, forget it. So I glibly imagine that there are still lawyers and wills, that there was still a Council of Nicaea, that there’s even still Christianity, etc., when most of that is pretty implausible. That allows me to make the differences more particular: “If we have wills, how would we make them reliable?” “If there’s still a Bible, how would people react to changes in it?”

But the biggest single problem was finding an actual narrative thread with conflict and resolution. I had so much fun with the history-of-science essay that I almost didn’t want to do anything else, and I had at least three false starts with what most readers would call the actual “story.”

Uncanny Magazine: The letter to Naomi is an example for the reader of a piece of text that shifts over the course of the story. What was your process for altering the letter? Did you change a specific percentage of the words each time?

Kenneth Schneyer: In one of those false starts I mentioned, I actually tried to do that: I counted the number of words I was changing in each successive iteration of the relevant text (which was a totally different document, in that draft). The result was awful—stilted and uninteresting. So when I finally wrote the letters you see here, I thought of them as three separate, coherent texts—one worried about being killed, one worried about having a break with reality, and one having decided on self-harm. What I liked about this was that it was easy for me to imagine letter #1 sensibly morphing into letter #2, and letter #2 into letter #3, while the overall transition—letter #1 to letter #3–seems absurd. And of course there’s a broader, deadlier issue in this: the slippery slope, the ease of accepting the next step into—evil? despair? callousness?—having taken a previous step.

Uncanny Magazine: You are a prolific writer of short fiction, with a new collection of short stories—Anthems Outside Time and Other Strange Voices—out with Fairwood Press last month. What themes do you find yourself returning to repeatedly in your fiction?

Kenneth Schneyer: I frequently return to issues of memory and loss. Certainly those issues are central to “Laws of Impermanence.” Of the 26 stories in Anthems, maybe 14 of them are concerned with memory, failure of memory, attitudes toward memory, the impact of memory on the self. Memory is tied to identity: we are built of what we remember and how we remember it, both as individuals and as institutions, nations, and civilizations. Without common memories or at least a way of making our memories comprehensible to each other, I doubt that communication and empathy are even possible.

Uncanny Magazine: As both an author and an attorney—if you lived in a world where written text changes over time, would you want to leave one or both of those professions?

Kenneth Schneyer: Law was actually the genesis of this tale. As sometimes happens, the idea for this story came out of conversation with my business law students. I often tell them that, although oral contracts are usually enforceable, written contracts are preferable because of the fallibility of human memory. “Two perfectly honest people,” I say, “can have utterly different recollections of the same event. Paper never forgets.” But after, I don’t know, the 30th or 40th time I said that, I started to wonder: But what if it did?

I think that (as is hinted in the story) if you were a lawyer in such a world, you’d have tedious double and triple fail-safes to make sure that documents were reliable, probably entire staffs of people to read and reread them to keep them true. (Can you imagine doing such a thing for a living?) I haven’t represented a client in over 30 years, but I imagine that being a lawyer per se wouldn’t be so different—just different procedures for ensuring the reliability of documents, and certainly different evidentiary standards in court. (There’d have to be something like the chain-of-custody requirement, only this would be chain-of-observing.)

As a writer, well, wow. It’d be an entirely different art form, wouldn’t it? More like live dance, live acting, or cooking, where the artifact is ephemeral and exists only in the memories of the audience. It’d be a lot more like being a bard, telling stories from memory and implanting those memories in the minds of your listeners. This story imagines what Walt Whitman might do in such a universe, because I suspect he would have loved it. But the control-freaks among us (Mark Twain, Harlan Ellison) would find it intolerable.

Uncanny Magazine: One of the threads in “Laws of Impermanence” is an alternate history of science. Do you have a favorite scientist? Were there any scientists or scientific discoveries that you wanted to include in the story, but couldn’t fit in?

Kenneth Schneyer: To answer the second question first, the story’s list of scientists is boringly classical—these are names you’d see in public high school textbooks in Republican states, and so they omit scientists from underrepresented groups. Not to mention that it’s all physicists, although I personally have a crush on chemistry and am deeply in love with astronomy. But I felt that the progress of physics from Aristotle to Newton to Einstein to Heisenberg is so well known that I could riff off it without my reader losing track of where I was going, so I sacrificed some nuance and complexity for the sake of (comparative) clarity.

I adore the history of science. The development and interplay of discoveries and ideas (including all their underlying politics and personalities) fascinates me. I don’t think I have a favorite scientist, but I have two favorite kinds of scientific moments. One is the “WTF was that?” moment when an experiment that gives an unexpected result. You know, Fleming looking at his contaminated petri dishes under a microscope or Herschel putting his thermometer just beyond the red end of the light spread by his prism. It must feel like such a gift, to be handed a genuine surprise and to have the juicy, difficult task of trying to make sense of it. The other favorite moment is the bold scientific prediction that comes true, like the return of the comet on schedule but 17 years after Halley’s death, or gallium being discovered with exactly the properties Dmitri Mendeleev said it would have.

Kenneth Schneyer: As usual, I have multiple stories I’m working on at the same time: two first drafts, five partial drafts, and a rewrite request. They span everything from theater to super powers to reaction videos to giant spiders to technological fixes for corporate ethics. 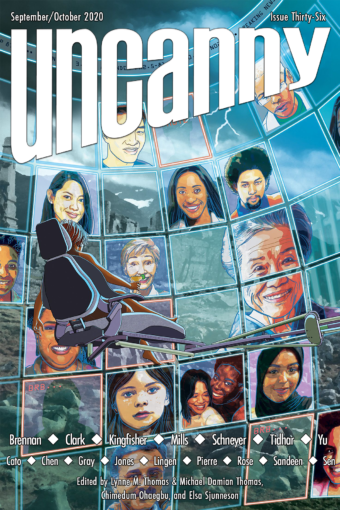