Emma Törzs is a writer, teacher, and chronic waitress based in Minneapolis. Her short fiction has been published in journals such as Lightspeed, Ploughshares, and the Missouri Review, and honored with a 2020 NEA fellowship, a 2019 World Fantasy Award, and a 2015 O. Henry Prize. “High in the Clean Blue Air” is her second appearance in Uncanny, a haunting tale of transformation, relationships, and the nature of humans and loons.

Uncanny Magazine: “High in the Clean Blue Air” is a beautifully written exploration of relationships, the differences between human and animal nature, and the ways we deal with regret. Are any of these things recurring themes for you? What other topics or themes do you find you return to repeatedly in your work?

Emma Törzs: Thank you for the kind words! I admit that I often don’t notice direct themes until after I’ve written something, but I’ve definitely been fascinated lately with animal vs. human nature, both on a metaphorical and practical level. Sometimes I stare into my cat’s eyes and marvel at how alien his consciousness is to me; how we humans try to ascribe words like “love” to our animal companions, but to even think the word “love” is already to be centering our own human consciousness to a non-transferable degree. I find this comforting! To imagine an experience of consciousness so beyond my own.

Other than that, I do often write about friendship and siblingship. I feel like most of my stories tend to be quite different from one another, but maybe that’s not true. I asked A.T. Greenblatt, who knows my work well (and, incidentally, has a fantastic story in this very issue of Uncanny), and she said a recurring theme of mine is: “A character going from loneliness to fulfillment.” I’ll take it!

Uncanny Magazine: I’m familiar with fairy tales where the protagonist is transformed into a swan, with variations involving ducks, geese, and ravens. Was this type of fairy tale part of your inspiration for this story? Why did you choose loons as opposed to other birds?

Emma Törzs: I was most inspired by two very different stories.

This story also has some connective tissue to Natalia Theodoridou’s “The Birding: A Fairy Tale,” which came out in 2017 and provoked a lot of interesting conversation between some friends and I about the idea of transformation—one of those themes I didn’t recognize in my own work until later, upon reflection. That story also resonates with my interest in de-centering human consciousness, and plus, it has birds. So even aside from admiring “The Birding” greatly, I owe Theodoridou a spark-debt for this story, here.

And why loons? I love loons!

Uncanny Magazine: I love the descriptions of Lake Superior—is that a place you have a personal connection to? Do you usually write stories in real-world locations or in completely fictional ones?

Emma Törzs: I live in Minnesota and am lucky to have friends with land up north, so I definitely have a personal connection to the lake. It’s one of my favorite bodies of water on earth. In fact, I started writing this story after my car broke down at my friend’s place near Superior and I was stranded there while I waited for the part to come in. It was the alternator we were waiting for—and for a long time the working draft of this was called “Alternator.”

I will say that any successful story I’ve written so far has been set in a real-world location, and to be honest I privately think of myself as kind of a place-based writer. I have written some middling second-world fantasy, and, accidentally, more than one middling sci-fi story that takes place in a fictional “dome,” but it doesn’t come easily to me. A challenge for the future!

Uncanny Magazine: “High in the Clean Blue Air” features a protagonist who has done something terrible in the past. Did you find Alice difficult to write as a sympathetic character?

Emma Törzs: Yes, it was hard. It was important to me that she neither ask for forgiveness nor be forgiven by the person she wronged. The ability to reflect, regret, and change without asking the wounded party to give more than they already have is a skill I myself cultivate (to varying degrees of success).

Uncanny Magazine: If you could transform into a loon, how much of your time do you think you would want to spend that way?

Emma Törzs: I would love to have the option. Can’t know until I try it, but at least a few hours every summer night, for sure.

Emma Törzs: WHAT’S NEXT FOR HUMANITY???

Just kidding, kind of. In terms of short fiction, I have another transformation story coming out sometime this year in Beneath Ceaseless Skies. And before the pandemic hit (boy, I never wanted to write those words outside of a sci-fi context), I was full speed ahead on the first draft of a novel, very fun to write, with estranged sisters, blood magic, murder most foul, international conspiracies, faithful pomeranians, etc.; but my productivity took a hit in March and is struggling to recover. Still, I’m hoping to have it done early this summer. Working title: “Don’t Be Alarmed by These Party Scenes, They Were Written Before Social Distancing.” 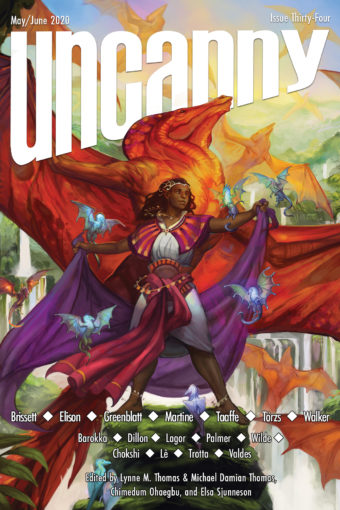